It is official…my son, Jacob, is a homeschool high school graduate! Last week, I shared our preparations for his graduation celebration. Would you like to know how things went? If so, read on! 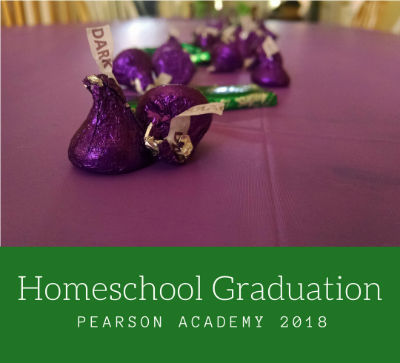 Early Saturday morning, I rose and started my day on the deck with a cup of tea and my Bible study. I knew it would be a busy day, and I wanted to start it right.

I brewed a pot of coffee while waiting for the donuts my brother-in-law’s family picked up for breakfast. After quickly devouring one of my faves, I drove my 14-year-old daughter to the store to pick up the cake. 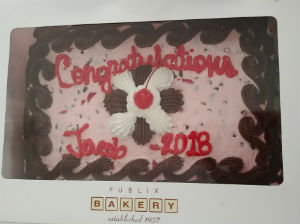 When we returned, everything happened quickly. Most of the kids began inflating purple and green balloons while my husband took one of the twins to the dollar store to pick up some special graduation-themed balloons to adorn our mailbox and my son’s seat of honor. 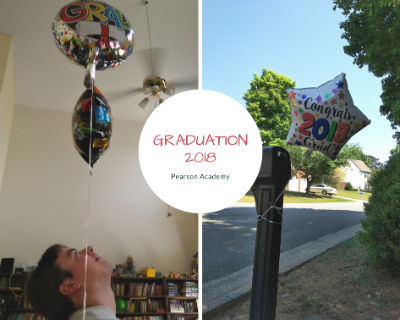 Under my daughter’s direction, streamers soon stretched from one end of the house to the other, punctuated by “dizzy danglers” and balloons in strategic locations. I spread purple tablecloths across our kitchen and dining room tables. My daughter adorned the kitchen table with Hershey’s Kisses and Andes candies while I slapped a few hands to keep kids from indulging before party time. 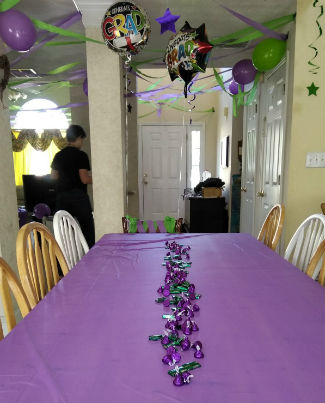 My sister-in-law put together a custom-lettered banner from a kit we had picked up at Walmart. In the blink of an eye, it was taped to the wall. As party time approached, the house was festive, and my daughter sat down to take a break. 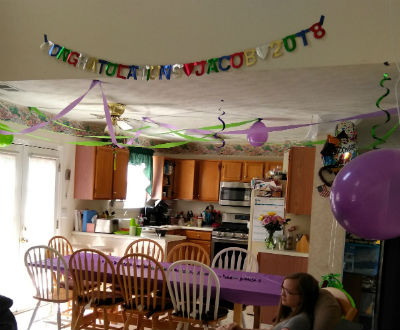 My husband called the pizza place and ordered the flavors we had all agreed on the night before—Hawaiian, supreme, bacon cheeseburger, and pepperoni. I headed upstairs to freshen up while the twins peered out the front window, expectantly awaiting the guests. 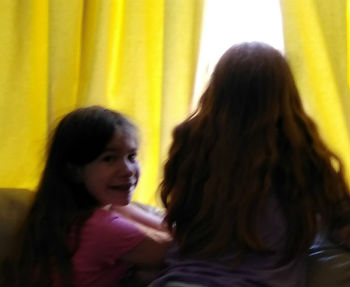 Friends arrived, exchanged hugs and handshakes, and settled in to view a slideshow of pictures from Jacob’s life. It was fascinating to see his tremendous growth and development over the years of homeschooling. 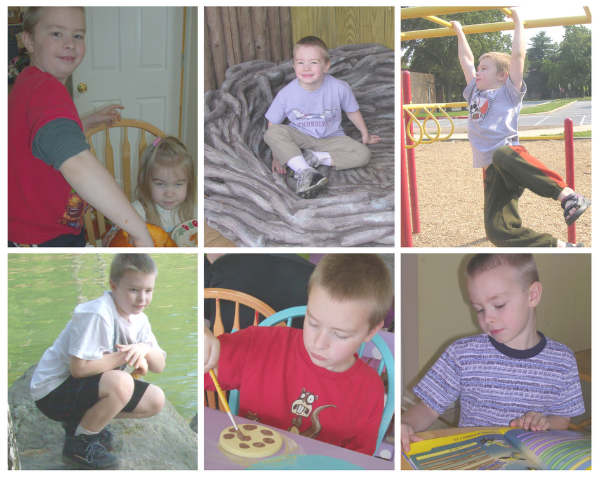 My husband and his brother headed to the pizzeria and returned with two pizzas for our party of eighteen. Would just two be enough? 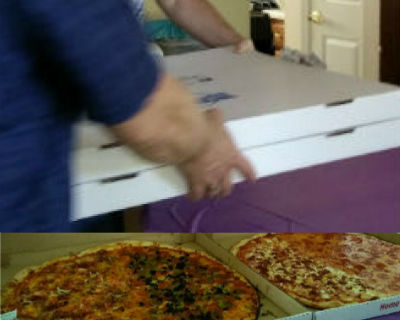 We soon discovered that a single slice of the 30-inch pizza dwarfed our party plates. Guests got creative by folding their pieces over to make them fit or cutting them down to a more manageable size using a pizza cutter. The kids clustered around the kitchen table, and the adults congregated in the living room since the pizza boxes had overtaken the dining room table. It was the only surface large enough for them! 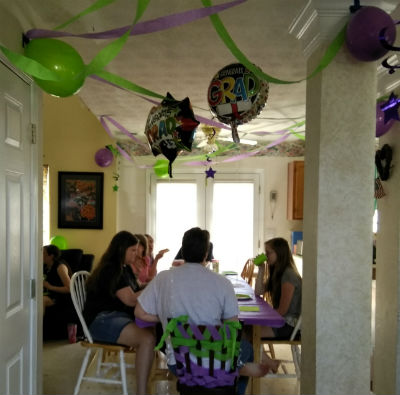 My middle daughter, who earlier had coordinated all the decorating, continued her role as hostess, gathering plates from the adults, who were glad to continue chatting with one another. 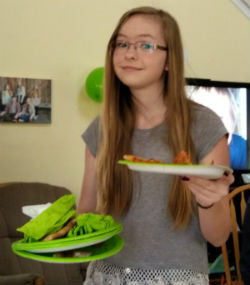 Once the food was put away and the ice cream was set out to soften, the kids joined the adults in the family room for the presentation of the diploma. As the room quieted, my husband shared a bit of our homeschool philosophy with our guests:

“Most importantly, besides instilling a love of God, of course, was also wanting to not kill the joy of learning. We wanted to make sure that whatever they were interested in, they could pursue as much and as deeply as they wanted to.

“Fortunately, the way Jacob has turned out, he really enjoys learning, and he has no problem tackling new topics and learning as much as he can about it on his own, which is going to be very useful later on in life… I’m glad to see him have no problem speaking to people older than him, get along very well with younger children. Hopefully he’ll grow into a great man. So I look forward to seeing what’s next in his life and how God wants to use him.” 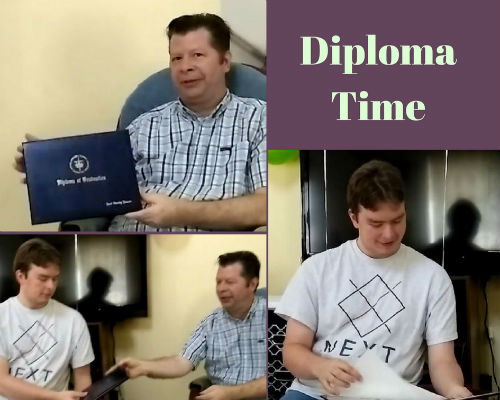 With those words, my husband presented Jacob’s diploma. Amidst a round of applause, my son opened the cover to reveal the diploma I ordered for him several months ago. Comments of “Very nice!” and “That’s so cool!” and “Great job!” filled the room. My favorite comment of all was from my nephew: “Your own personal diploma for your own family. That’s pretty cool!”

With the “official” portion of the festivities completed, Jacob dug into the graduation presents our guests so generously gave. It warmed my heart to hear him express sincere gratitude as he opened each one. 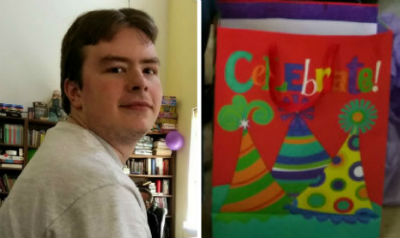 Soon it was time for the last planned activity of the party—enjoying the cake! I sliced it, my daughter scooped the ice cream, and my sister-in-law delivered the delicious dessert to our guests. 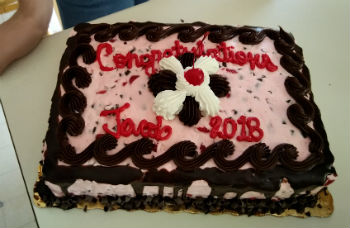 While chatter continued, my husband ran the slide show one more time, and pictures of my son’s youthful face lit up our TV screen. 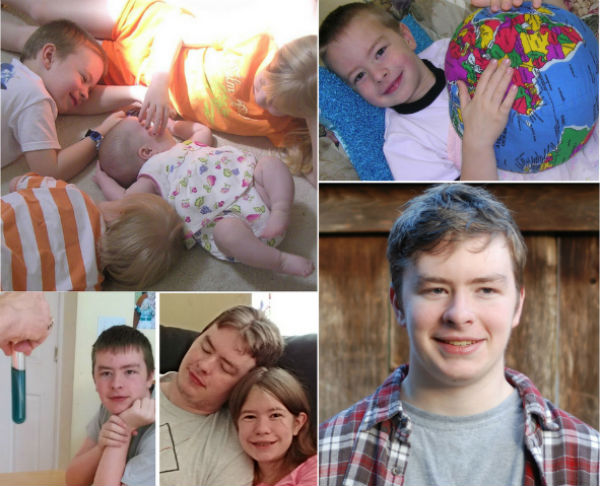 Before we knew it, the party was over, and most of our guests departed.

Planning celebrations like this one really is not my forte, but we had a great party! Our whole family worked together to make it a success. I am proud of my son for working so hard and finishing high school well.

Please share your graduation party planning tips in the comments!