My son’s upcoming graduation became real to me when I ordered his high school diploma a few weeks ago. When my daughter graduated in 2016, we designed our own diploma and printed it on certificate paper. This year, however, I was given the opportunity to order the Standard Diploma from Homeschool Diploma and write a review about it.

The idea was a little overwhelming at first. Designing my daughter’s diploma a couple years ago required a bit of research to see typical diploma layouts and wording. I borrowed her diploma to take a look at what we had decided on, knowing I would probably end up making different choices on my son’s diploma.

I called over my 13-year-old daughter to help me order her older brother’s diploma. We looked at the three main high school diploma styles and decided to upgrade to the personalized diploma, which could be fully customized.

This is so exciting!

Together, we chose a center seal, filled in my son’s name, entered our school name, and chose the wording we liked best. 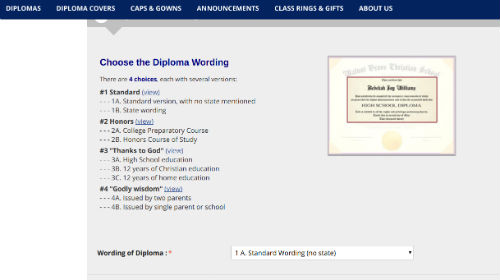 Together, my daughter and I decided on the actual graduation date which could be included on the diploma. Even though we chose May 19, we decided to simply include the month and year on the diploma. We were able to customize the labels under the two signature lines as well. 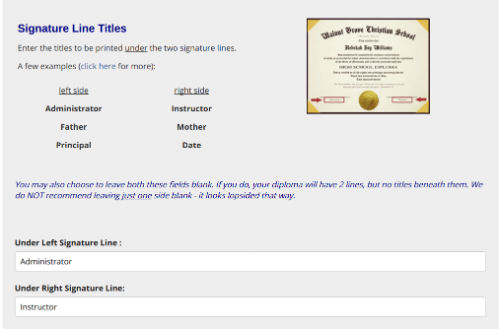 I was pleasantly surprised to find that the diploma comes with a cover which can also be customized. Though we could have included our school name in the center, we opted for the Soli Deo Gloria (To God Be the Glory) seal. In addition, we elected to have my son’s name embossed at the bottom of the cover. 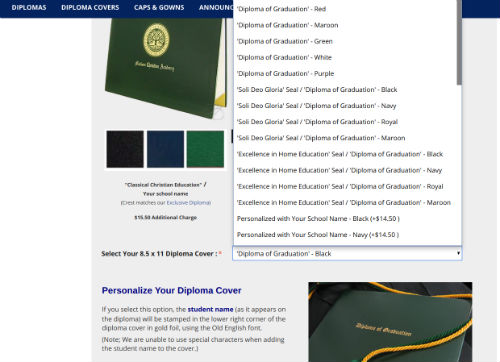 Another big surprise was an optional wallet diploma we could order for our son. What a cool idea! Our son will be able to carry a copy of his diploma with him wherever he goes. I also ordered an archival copy of the diploma that I can file away just in case anything ever happens to the original. 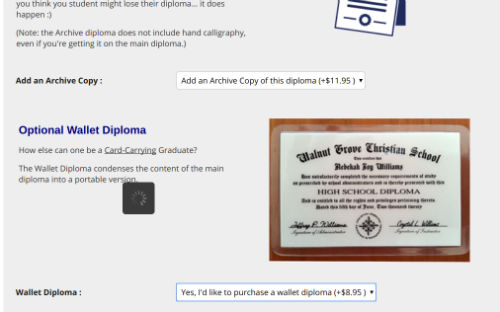 Finally, we were satisfied with our choices, and I added the customized diploma to our cart. A window popped up with all of the options we had chosen, and I started to read through it to double check everything when it suddenly disappeared.

That is when I made my first and only mistake in the ordering process. Figuring I must have bumped something with my mouse pad, I frantically switched windows trying to see where it had gone. My daughter and I decided I must have done something wrong, so I clicked the button to add the diploma to our cart again. This time I paid attention and realized that the window disappeared on its own after a few seconds.

I checked my cart and found two diplomas there, but I was able to easily remove the duplicate. It was much easier to check the details of my son’s diploma in the cart than it was in that disappearing window. 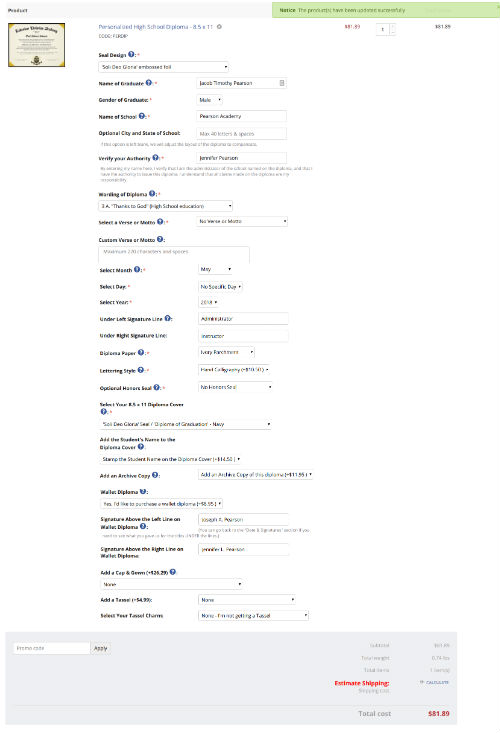 When my husband got home, I sat down with him and showed him what we had chosen. He, too, was impressed when he realized that Homeschool Diploma was going to print this customized diploma and mail it to us. With one last click, I placed the order.

Since my laser printer has been leaving ink smudges in odd places lately, I am so glad someone else is printing my son’s diploma. I spent several days working out all the layout, wording, and other details when designing my daughter’s diploma two years ago; the ordering process for my son’s diploma took less than twenty minutes. I could hardly wait to see how it would turn out.

The Diploma is Here!

I did not have to wait long. Within a week, the diploma arrived. With bated breath, I opened the sturdy cardboard envelope labeled “Do Not BEND!” Inside, a large ziplock bag protected the contents from the elements. The first thing I noticed was an order slip with a detailed summary of all the options I had chosen. 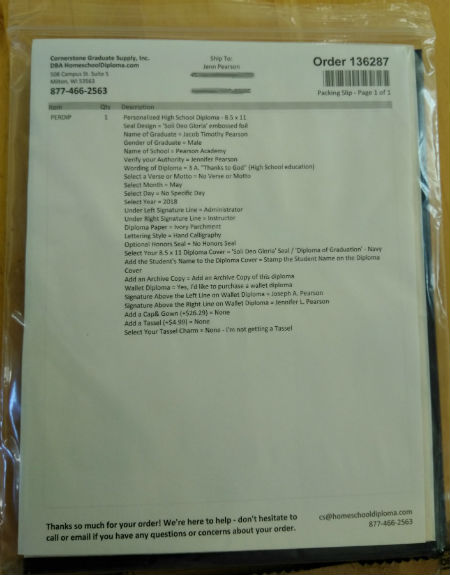 I unzipped the bag and removed the summary to reveal the the diploma cover. It looked great! Having my son’s name embossed on the outside was such a nice touch. 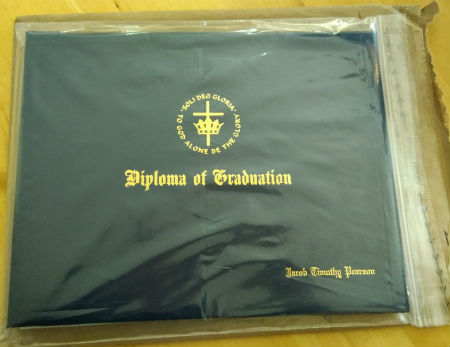 I pulled everything out of the ziplock and flipped the cover open to find a protective paper over the diploma. A small slip of paper gave advice for signing it. 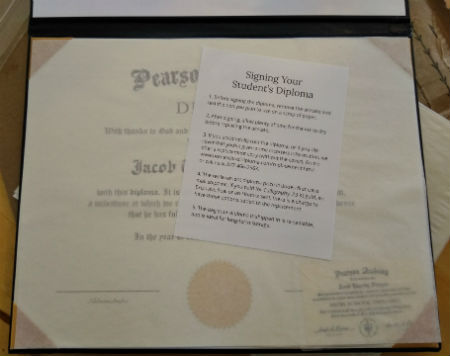 The wallet-sized diploma was tucked into the bottom right corner of the diploma cover. 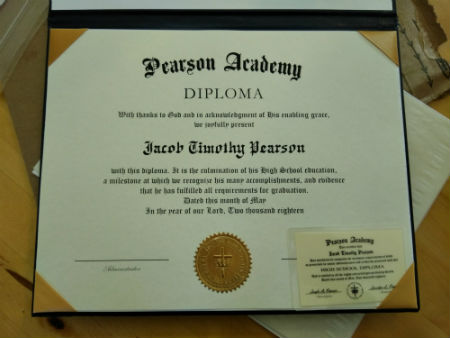 The archival diploma I ordered was in a separate translucent envelope behind the diploma case. 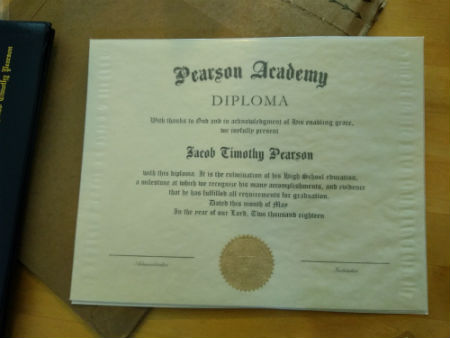 When a friend came over a few days later, I proudly showed her the diploma my son will receive in May. We both stood there admiring it. 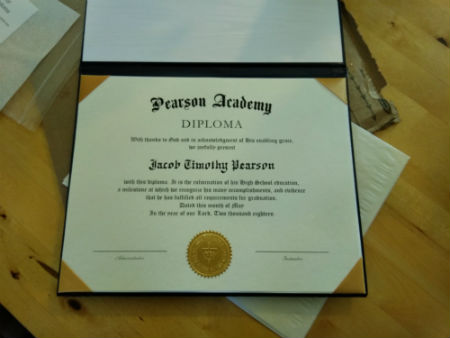 Even though my daughter’s homemade diploma is very special to her, I am excited to bless my son with such a professional looking diploma with a personalized cover. Homeschool Diploma made it easy and convenient to order, and I can hardly wait to see my son’s face when my husband presents it to him next month.

Homeschool Diploma also supplies caps and gowns as well as diplomas for kindergarten or eighth grade graduation. Be sure to read other crew reviews to learn more about these products.