A few weeks ago I had the opportunity to watch and review Princess Cut, a family-friendly Christian movie from Watchman Pictures. When the DVD arrived, the kids kept asking when we would watch it. 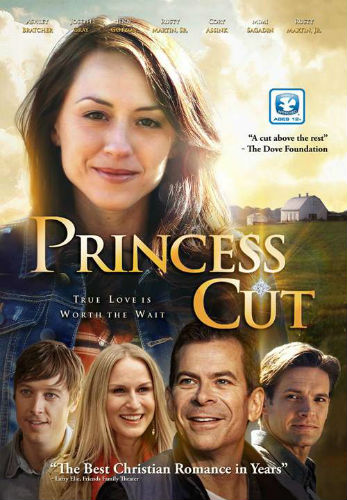 Every Friday evening is movie night in our home, so that week’s feature was, of course, Princess Cut. We all snuggled together with our favorite movie snacks to watch an inspiring Christian film that addresses timely topics.

Princess Cut is an entertaining and thought-provoking movie that highlights the differences between the world’s standards and the Bible’s standards in love relationships. The main character, Grace, suffers a broken relationship with the young man she expected to propose to her.

Her inner turmoil lands her in a rebound relationship with a guy who does not share or respect her values. Thankfully, she realizes the inappropriateness of the relationship before things get out of hand and discusses the situation with her parents. Following her dad’s advice, she spends time seeking the God who truly loves her, trusting Him to bring the right guy to her in His time.

Some aspects of the movie seem a bit unrealistic. Grace’s family is portrayed idealistically, depicting how things should be but not necessarily how they are in modern families. There is also an exaggerated scene where Grace visits her friend’s therapist, who gives her advice that is clearly out of line with Scripture. While the scene clearly highlights the differences between worldly advice and godly truth, it left us wondering, Do therapists like that one really exist?

My husband and I were surprised that in such a clearly Christian film, we never see any of the characters attending church. The film also does not show Grace asking the young men in the movie about their faith before dating them. The lack of these details seems inconsistent with the overall message of the movie.

We all enjoyed the movie although my thirteen year old daughter found it “way too predictable.” One of my twelve year old twin daughters liked the way the movie “shows girls what to do and not to do in dating and marriage.” The other twin compared the film to a “book on how to find the right guy” but liked the way the information was presented “indirectly, as a movie.”

Although the film is technically awkward in the beginning, with rather stiff acting and dialogue, it improves steadily throughout the movie. Our family enjoyed watching Princess Cut together, and we appreciated the overtly Christian values. The father’s advice for Grace to seek the Lord and allow Him to bring love to her is exactly the message I want to communicate to my children. Why not watch Princess Cut for your next family movie night?