As I savored the cool mountain air during Saturday morning’s hike, my daughter announced, “Mom, you should write a blog about this!” Who am I to argue with her awesome idea? 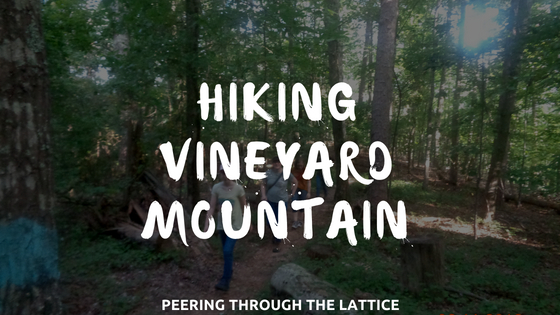 Vineyard Mountain rises above Allatoona Lake in Emerson, GA, forty miles northwest of Atlanta. The trails were created as an Eagle Scout project. They climb to the top of the mountain and eventually end by the road to Red Top Mountain State Park.

It had been several months since we had hiked as a family. After enjoying some muffins for breakfast, we put on hiking boots and piled into the minivan. My husband drove me and our four daughters to the trailhead. My son opted to stay home.

The five dollar entrance fee for the day use area caught us off guard. We backtracked to an ATM, then returned. We parked on the northern side of the mountain and examined the trail map by the entrance.

There are three levels of difficulty. Yellow is the easiest; blue is moderate; red is the most challenging. Which trail should we follow? 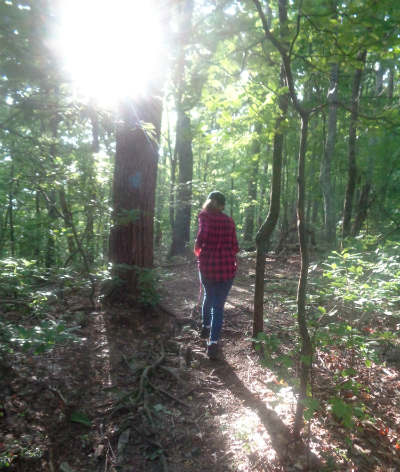 We started on the blue trail, which connects to the other trails part way up. I was soon breathing heavily as I struggled to keep up with my husband and the girls. There was no “warm-up” section on this trail. After traversing the first quarter mile, the trail leveled off a bit. The pace became more manageable as we reached the yellow trail. Up ahead, a fallen tree blocked our path. 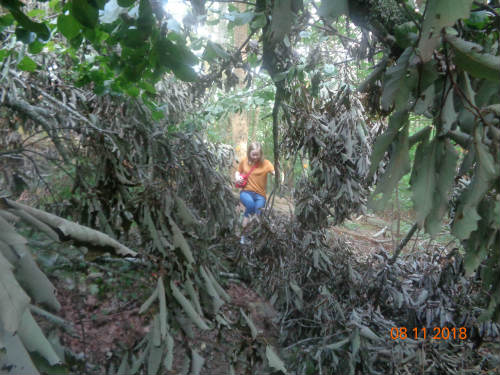 Maneuvering our way over and under the branches, we found the trail again. However, we were surrounded by red blazes instead of the yellow ones we had expected. This challenging trail headed straight up the mountain. Could we make it to the top?

Though we had to stop and rest periodically on the steep trail, most of us reached the summit together. Only a communications tower stood between us and the sky. 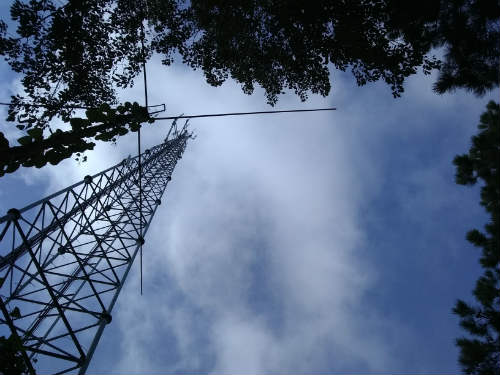 While we waited for the remainder of the family, a lone hiker plodded steadily to the top of the trail. With trekking poles in hand, he smiled and announced “One!” Turning, he started back down the trail. Did he intend to repeat the performance?

“How many times will you hike the trail?” I wondered aloud.

“Most days I hike it twice,” was his quick response as he disappeared down the mountain.

While waiting for the rest of our crew to make it to the top, we explored the area, searching for a geocache. It had been a while since we had attempted this GPS-assisted treasure hunt, and we were a bit rusty. We investigated several dead logs near the summit for the elusive cache. Having no success in twenty minutes, we gave up searching the steep terrain.

By then the entire family had reached the summit. It would have been fun to continue down the other side of the mountain, but did we have enough energy? All agreed we should turn around and head back.

We split into two groups for the descent. My husband, my middle daughter, and one of the twins were in the lead group. My oldest daughter and I hung back with the younger twin. We slowed our pace in consideration of her fear of catapulting down the rugged terrain.

The relaxed pace allowed us to notice more of our surroundings. We enjoyed taking pictures of interesting plants we noticed on the path. 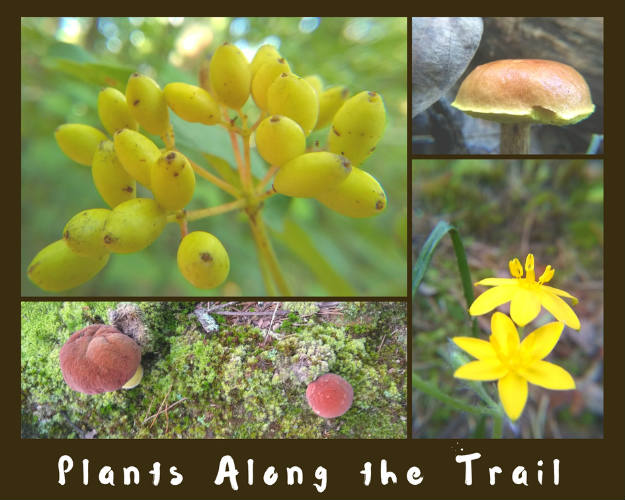 By the time we neared the fallen tree, I began to wonder where the other half of our family was. When we again crossed paths with the friendly hiker we had met at the summit, I asked him, “Have you seen the rest of my family?”

“They’re up ahead on the bench,” he replied. We soon saw that he was right. They had paused to wait for us where the trail split. 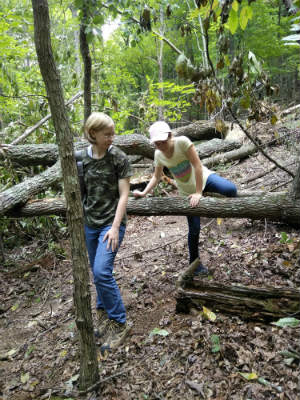 We climbed over some small trees that had fallen across the trail. But we decided to walk around the large one that blocked the path. It was much easier and safer than threading our way through the many branches, as we had on our ascent.

With the family reunited, we switched to the yellow trail. The descent was more gradual, and it was refreshing to see new scenery. Before long, a small stream appeared to our left and then crossed our trail. 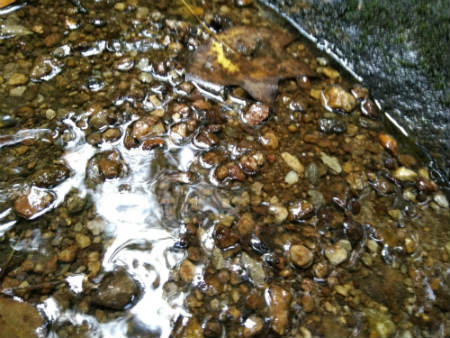 A short ways further, we crossed the stream again on a wooden plank bridge. 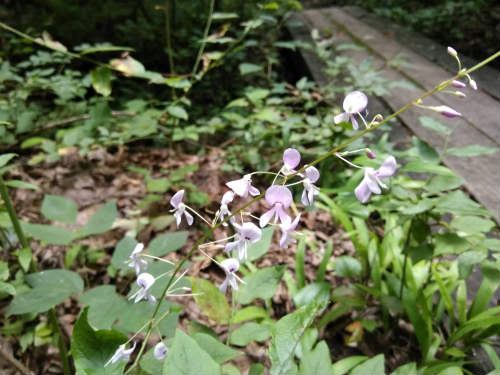 As we rounded the next corner, I glimpsed the guardrail along the road and knew we must be nearing the parking lot.

Sure enough, the trail curved left toward the road, and we reached the trailhead. My husband had arrived at the car ahead of us and had already started the engine. We were glad to climb into the cool air conditioning after our adventure.

Though it was a challenging hike, we enjoyed our trek up Vineyard Mountain. In hindsight, we should have chosen an easier trail, given our lack of recent hiking experience. Perhaps next time we will hike the nearby Laurel Ridge Trail at Cooper’s Furnace. It climbs at a more manageable angle to an overlook above Allatoona Dam. I have fond memories of hiking there with the kids when they were younger.

Does your family enjoy hiking? Please share your favorite trails (or alternate family activities) in the comments below.