Taking toddlers to the pumpkin patch is a no-brainer. And there is never any question about hauling elementary-aged kids on a hayride. But have my tweens, teens, and young adults outgrown our annual trip to the pumpkin farm?

Last week, the lingering warm weather gave way to cooler temperatures. Fall was in the air. It was time to visit Burt’s Farm in the north Georgia mountains. 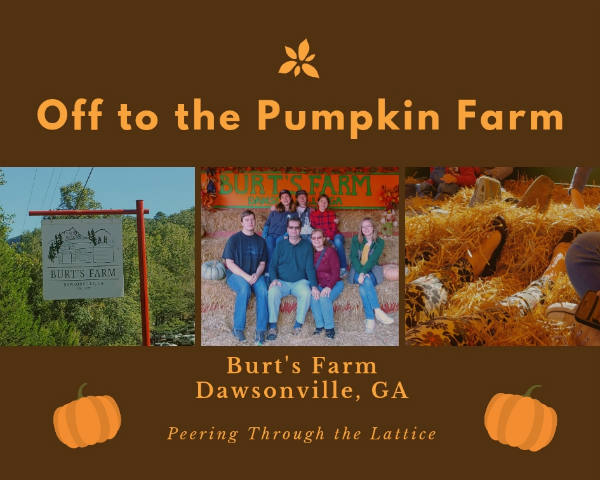 We made an early start to beat the crowds. As we approached the crowded parking lot, we realized that many others had the same idea. Thankfully, there were still a few parking spots left in the main lot.

The hayrides were scheduled to begin at 10. Our 9:30 arrival meant we would have half an hour to wait. Or would we? To our amazement, the tractors had already started pulling the hay wagons. They were catering to the larger-than-normal early morning crowd. 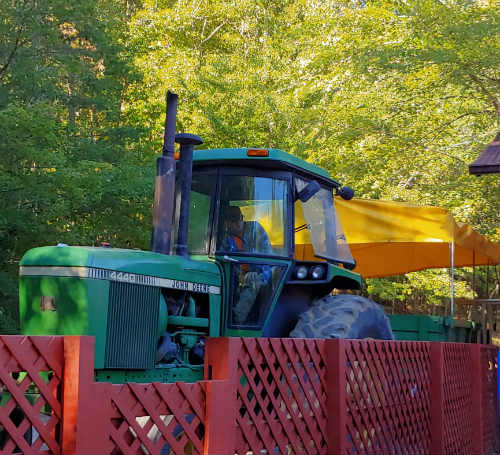 We purchased our tickets… 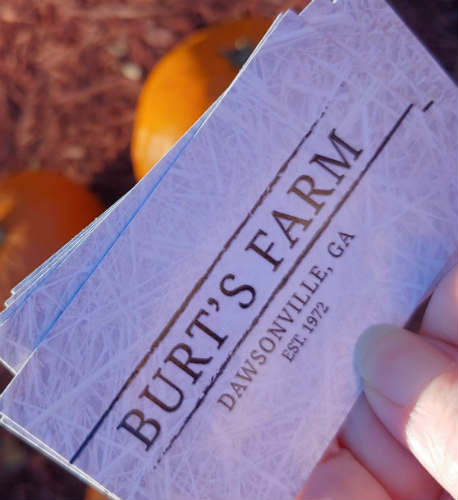 …then climbed on the next hayride.

The tractor pulled our wagon down a gravel road and across a small stream. 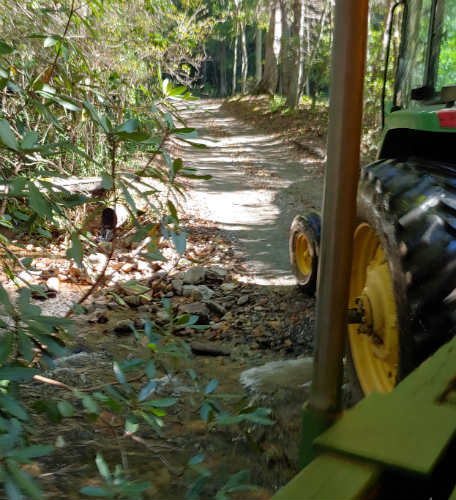 From there, the road led around a large field of flowers and pumpkins. 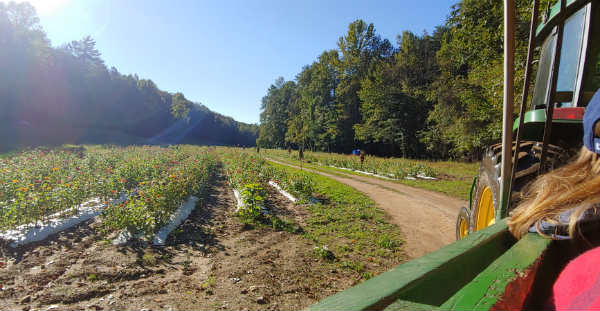 We stopped in front of a shed to listen to two animatronic talking pumpkins. They discussed how becoming a jack-o-lantern is like becoming a child of God. God cleans all the yucky stuff out, puts a smile on our faces, and shines His light through us. 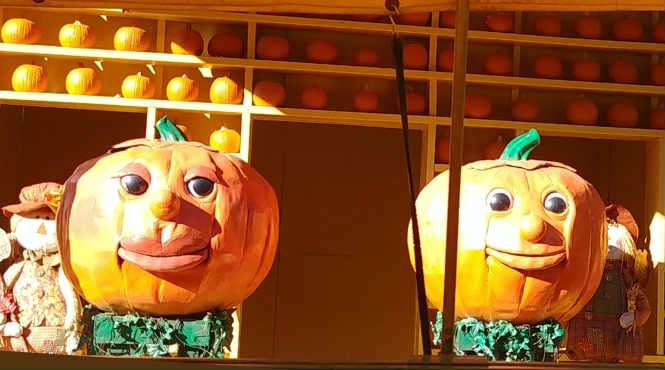 After the pumpkins had finished talking, the tractor engine started up again. We rode past the scarecrows and out of the field.

The road passed through a forested area. I looked up at the trees and noticed giant black spiders! 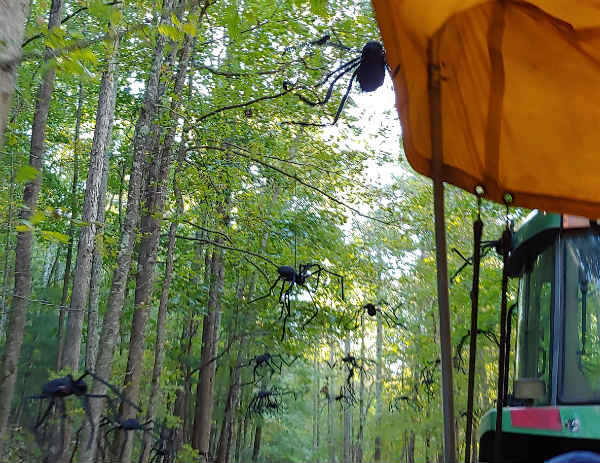 Next, we approached an eerily-decorated covered bridge. The Adams Family theme song surrounded us as we passed through.

Coming out of the bridge, we traveled past a wagonload of pumpkins. 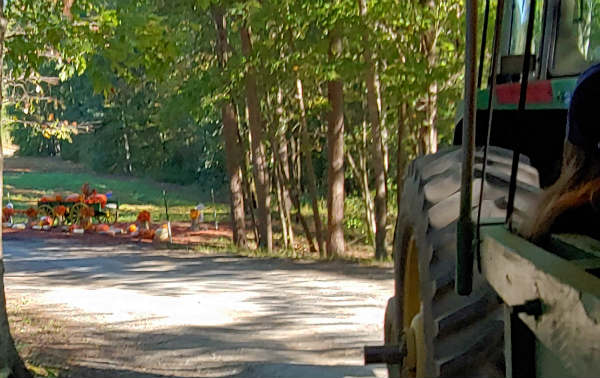 We relaxed and enjoyed the cool mountain air as the hayride continued up a gravel road. Other creative displays caught our attention. 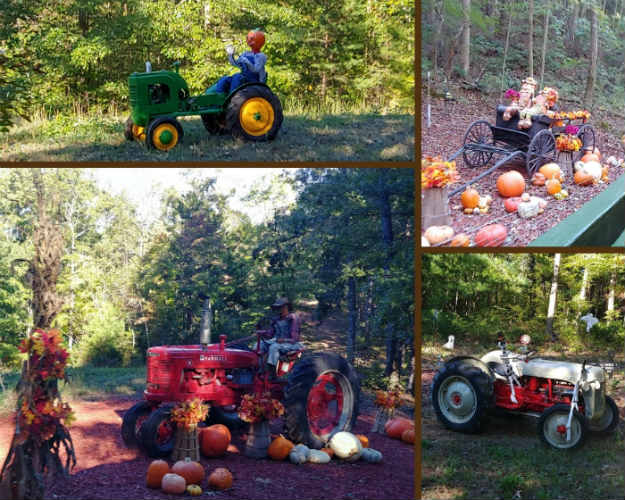 As we topped the final steep hill, the parking lot came into view. 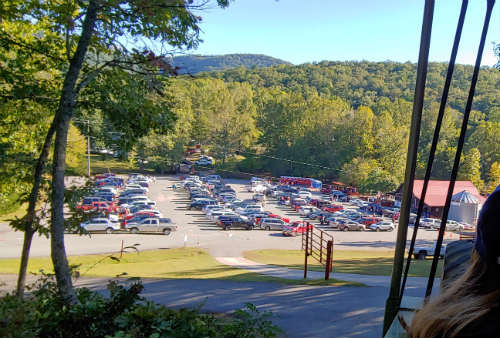 Moments later, we climbed off the hayride. It was time to find the perfect pumpkins.

But first, we claimed a wheelbarrow to haul our pumpkins in. Of course, the kids had to pose for a group shot around (and in) it. 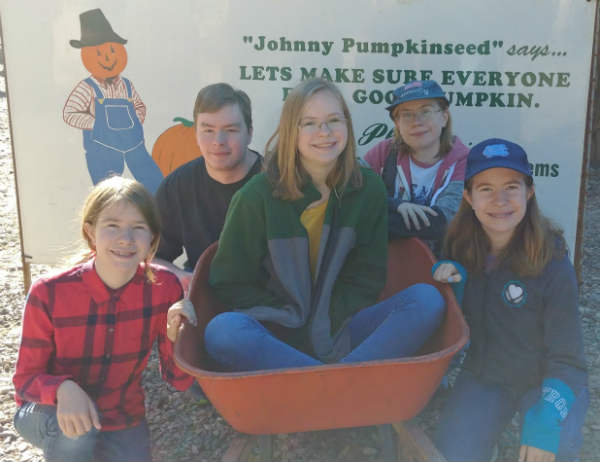 We stopped for a taste of Burt’s Farm’s jellies, butters, and relishes. I always enjoy pumpkin butter. We also sampled some pepper jellies that were delicious, though a bit spicy. 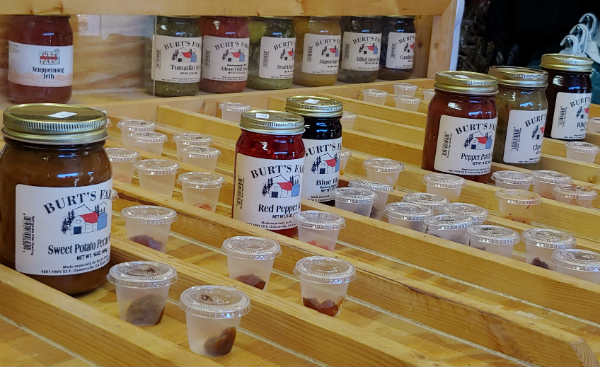 Outside the tasting barn, some sizable pumpkins caught the kids’ attention. They had a friendly competition. Who could pick up the biggest pumpkin? Even Dad got in on the action as he attempted to lift a heavy pumpkin we had no intention of taking home with us. It was fun to watch. 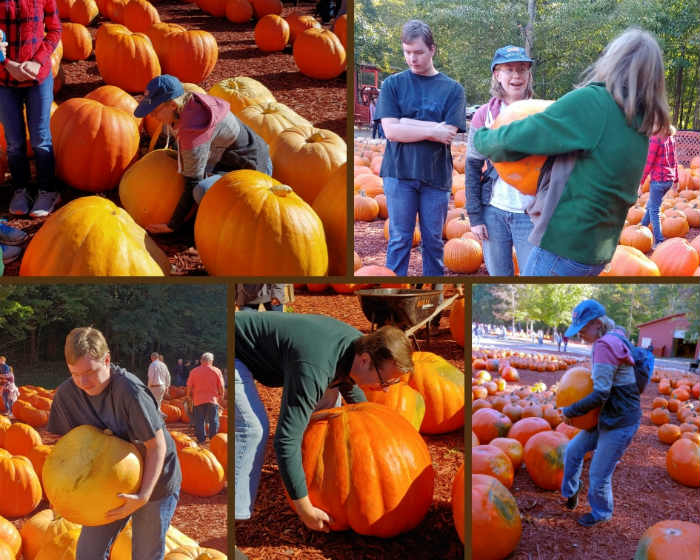 After everyone had finished showing off, the kids started searching for the perfect pumpkins. There were plenty to choose from.

Two kids selected pumpkins and carried them to the wheelbarrow. 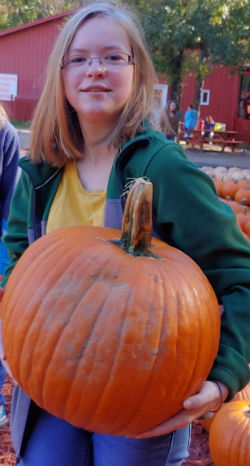 Next, we walked to the covered area where we could choose from a variety of other types of squash. The kids helped me choose butternut squash. 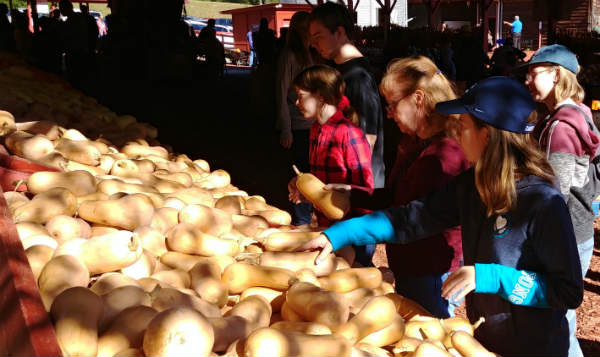 We added a spaghetti squash and some acorn squash to the wheelbarrow as well. My fourteen-year-old insisted on choosing some decorative items as well. The most interesting were the gremlin gourds. 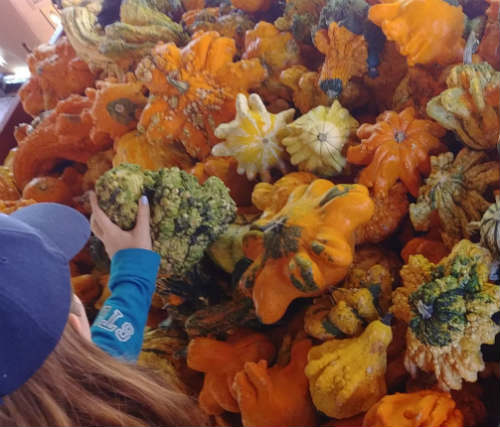 We added several decorative gourds to the wheelbarrow, paid for our produce, and wheeled it all to the car.

I don’t know why I ever doubted that my kids would enjoy visiting Burt’s Farm. Everyone enjoyed the hayride, tasting room, and friendly competition. They had a great time shopping too. I hope they never outgrow fall fun at the farm.

Has fall weather arrived in your neck of the woods? Have you made it to the farm yet? Hop over to my Facebook page and share your fall farm pics.