The state of Georgia is known for hot, humid summers and mild winters. Being a transplanted Maryland girl, I sometimes long to see white flakes floating from the sky in the winter. Does it ever snow in Georgia?

Last Friday, on our way to Community Bible Study class, we drove through showers of sleet. Since we had places to go and things to do, I was grateful that the temperatures hovered in the high 30s. The roads were safe. The next morning, though, we awoke to a marvelous surprise. 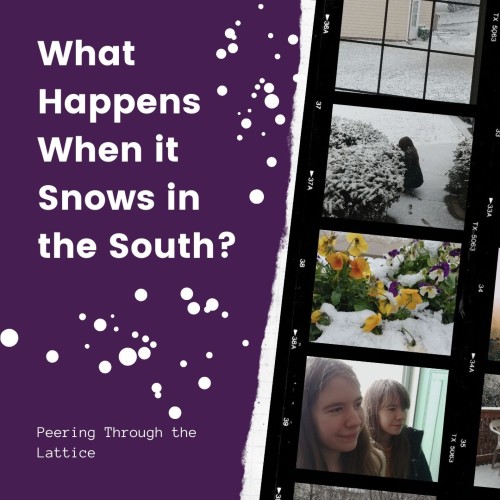 It was snowing! Peeking out the upstairs window, I could see winter-white lawns across the street.

Since it was a good morning to stay inside, I cooked breakfast with ingredients I had picked up the previous day after hearing the forecast. Snow continued to fall. Before we finished eating, the back deck was blanketed with white. 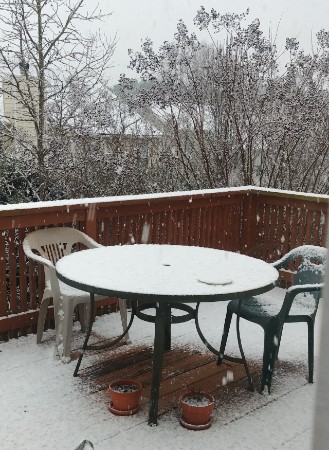 Everything outside turns into an adventure when it snows. Excitedly, the girls headed to the backyard to jump on the trampoline and play in our winter wonderland.

Coming in to thaw their fingers, the kids played board games for a while. Halfway through the morning, snow had coated the streets. Delighted with the transformation, the twins headed outside to use their smartphone cameras. 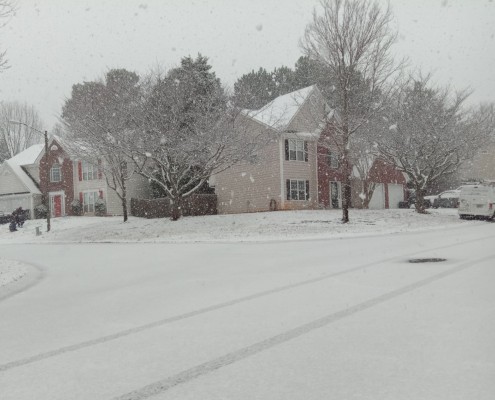 After exploring and taking pictures, their hair was speckled with white. 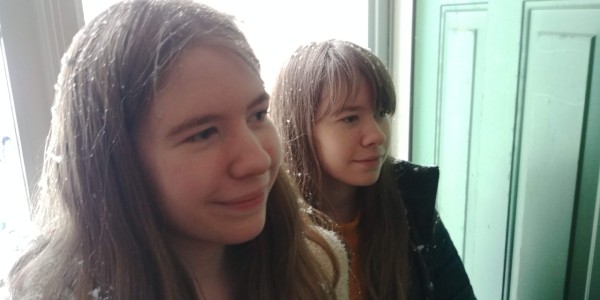 By afternoon, the snow had stopped, and temperatures began to climb. Once the streets turned from white to gray, the girls begged Dad to take them shopping. Happy to leave home for a bit, my husband took them to their favorite bubble tea shop. Outside the entrance, a surprise greeted them. 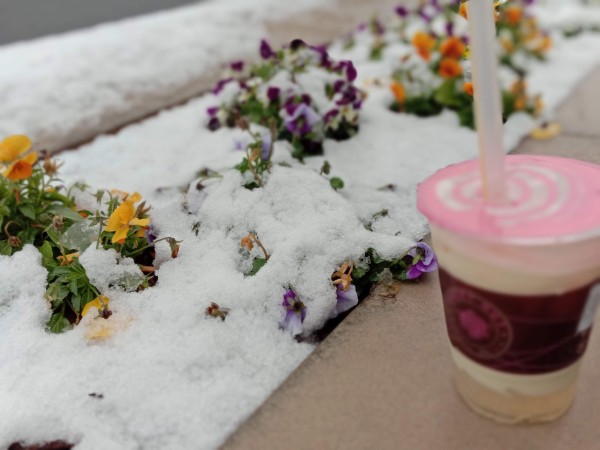 Here in Georgia, flowers have already begun to bloom. Peeking through a blanket of snow, the blossoms were beautiful.

After visiting several thrift stores, the shoppers returned home. As dinnertime approached, we learned that local churches were canceling Sunday services because of the weather. Even though the snow had stopped hours ago, black ice was a threat overnight. 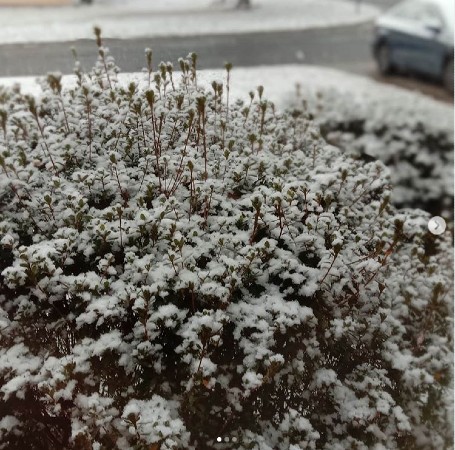 Snow days in Georgia are a rare occurrence. Our last real snow was about two years ago. But be warned! The lack of regular snowfall means that salt trucks and snowplows are nowhere to be found. A simple 2-inch dusting can shut everything down for a day or two.

After a few wintry days, the weather inevitably warms up again. When it does, life returns to normal, and our big snowstorm is just a pleasant memory.

Do the shelves in your local grocery store empty when snow is predicted? How much snow constitutes a “big snowstorm” where you live?