Disclaimer: I received a FREE copy of this product through the HOMESCHOOL REVIEW CREW in exchange for my honest review. I was not required to write a positive review nor was I compensated in any other way.

Are your kids fascinated by missionary stories? Mine sure are! When offered an opportunity to review a new missionary biography, Venturing with God in Congo, the twins and I were excited. The book provides a firsthand account of Darrell Champlin’s experiences as a missionary to Congo in the mid-1900s. When the package arrived from Conjurske Publications, we couldn’t open it quickly enough. 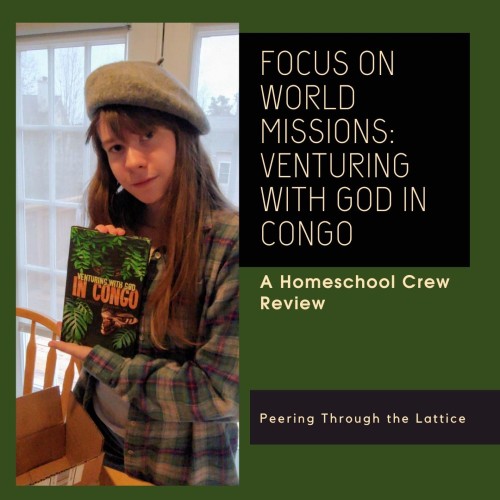 Pulling the book from its packaging, we were impressed with the solid hard-cover construction. The twins appreciated the jungle plants and animals which adorned the cover.

Our initial survey of the book revealed a map and timeline at the beginning. Immediately following the introduction, a family tree page highlights Darrell’s family and key characters from the book. Darrell’s wife Louise’s parents, who were missionaries to Congo before Darrell was born, are included on the page. Near the center of the book, we discovered several pages’ worth of black and white photographs, depicting key people and events. 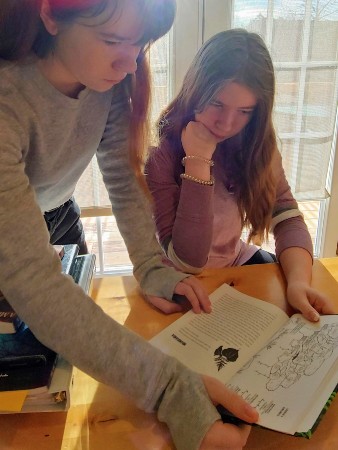 I knew that the best way for us to enjoy the book would be to read it aloud. Each morning while the girls ate breakfast, I read from Venturing with God in Congo. Although some of the names were tough for me to pronounce (pronunciation tips are included), it was clearly the right choice. Both of my fourteen-year-old twins liked having the book read aloud. The older one remarked, “[When read aloud,] stories make more sense. It’s especially helpful with books with more complex sentence structure—which was certainly the case with this book.” We all gleaned more from me reading this biography aloud than if we had each read it on our own.

Unlike traditional missionary biographies, which give a chronological account of a missionary’s life, Venturing with God in Congo is comprised of short stories. After Darrell and his wife elaborate on their upbringing in the book’s introduction, he relates the story of his in-laws’ arrival in Congo in the 1930s. Then his firsthand account begins. Nearly 50 short stories offer the reader a glimpse of life on the frontier mission field in Congo. Though roughly arranged by time, some stories overlap with others.

As we read each story, it was almost like having a missionary in our living room, relating a memorable incident from his time in Africa. From one account to another, there was some repetition of necessary background material. Though at times, this seemed redundant, it enabled other family members who didn’t hear every story to be able to better understand and appreciate the ones they listened in on.

The stories in Venturing with God in Congo are compelling and encouraging. Here’s what the twins had to say about them:

“The stories are really amazing—so much so that they’re almost unbelievable. They show that God is superior and can do anything.”
~the younger twin

“The book tells all about Congo and offers an image of what Congo is really like. The miracles are just amazing—it kind of makes me want to go to Congo to be a missionary.”
~the older twin

As I prepared to write this review, I asked the twins what stories stood out to them. Which ones were their favorites?

My younger daughter responded immediately. She liked the story entitled, “Killing a Poisonous Snake a Missionary Wife’s Way.” What does a missionary wife do when a viper enters her house while her husband is away? She doesn’t run. She kills the nasty creature using her own ingenuity and the tools at her disposal—her foot and a knife from her kitchen.

The story “White Man, Do You Eat Snake?” most impacted the older twin. In it, the village witch doctor complained that Christian converts in the community were hunting and eating civet cat, a food that was taboo in the culture. He astutely observed that Darrell had similar taboos—for example, he had never eaten snake. Darrell proposed a deal. If he ate snake, would the witch doctor try civet cat? Too hastily, he agreed. At the next opportunity, Darrell’s wife prepared snake for dinner. Then he visited the witch doctor’s home with friends who had witnessed the family feasting on snake. Calling the witch doctor’s bluff, he offered him a piece of a deliciously prepared civet cat. The witch doctor’s abject refusal surprised us. However, the story served as a poignant illustration of the freedom we have in Jesus.

The runner-up favorite was entitled “Monkey Stew for Two.” A Belgian businessman who lived in Congo longed to sample monkey stew. His wife, however, objected to the very idea. While she was visiting friends in Europe, Darrell was invited to stay in his guesthouse. It was the perfect opportunity. At the man’s request, Darrell secured a monkey, and a Congolese cook prepared the succulent stew for the men. Both girls found the story humorous.

“It’s pretty funny how the one guy’s wife wasn’t there, and she wouldn’t let him eat monkey stew, so when she was gone, they ate monkey stew.” 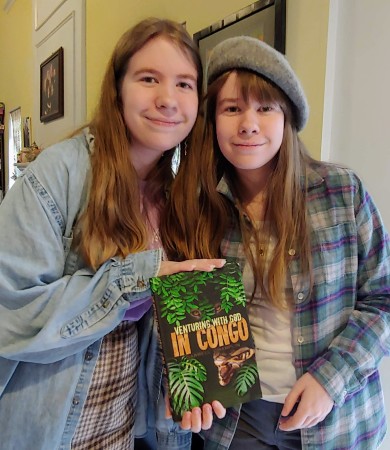 A Superb Addition to Our Homeschool

Near the end of 2019, the girls and I spent a month or more learning about Africa. Venturing with God in Congo built upon that foundation. Having already learned about missionaries like David Livingstone and Mary Slessor, we eagerly become acquainted with a more modern missionary who spread the Good News of Jesus on the same continent.

Darrell’s firsthand account gave us a more complete picture of living conditions in Africa. We learned what traditional houses were like. Because of termite infestations, these small, leaky homes lasted only a few years before being burned and rebuilt. It provided a stark contrast to the sturdy, clean, and comparatively large house the twins have lived in their whole lives.

It was exciting to read about the challenges of travel in a nation where few roads were maintained. Would you rise to the challenge of pedaling a bicycle down jungle trails? Can you imagine crossing a river on a ferry that required you to drive your vehicle across carefully-aligned planks to get it onboard?

Although we knew wild animals like lions and snakes make life in Africa exciting and a bit dangerous, we had never considered equally troublesome smaller creatures. In addition to termites that destroy homes, Africa is also home to insects that burrow under the skin.

Beginning to understand how the people of Congo view the spirit world, we got a clearer picture of animism. Food taboos that appear ludicrous to Americans govern the lives of Congolese people who have never heard the Gospel.

Near the end of the book, we were confronted head-on with the violence that erupted when the Belgian government granted Congo independence. We were shocked at the misconceptions the people had about what freedom would bring them. They anticipated truckloads of free food, injections that would let their kids learn everything they needed to know in just a few days, and the dead rising from the grave. Their hopes were soon dashed. Given their high expectations, is it any surprise that their disappointment triggered such a wave of violence that the missionaries were ultimately forced to leave?

Because Venturing with God in Congo is about missions work in a third-world country, the girls had definite opinions when a related question arose in our primary curriculum. Should workers introduce western technologies and ideas to tribal cultures? The girls agreed that they should—while also allowing them to choose whether to accept it or not. Similarly, my daughters insist that missionaries need to carry the Good News of the Gospel to the people still living in darkness in places like Congo.

More than anything else, Venturing with God in Congo strengthened my daughters’ faith. I can’t word it any better than my youngest daughter did:

“If an unbeliever read the book they’d either think it’s fiction or marvel at the power of God. Now I have proof that God can do amazing miracles.”

Should You Buy the Book?

We have enjoyed reading Venturing with God in Congo. It is an excellent book to read aloud to supplement a homeschool curriculum. Since each story ends with a related Bible passage, it would be a great addition to family devotions.

If your kids are young or sensitive, be aware that some of the stories tell about violent situations, and some have sad endings. In this case, you may want to pre-read the stories before presenting them to your family; doing so provides the perfect opportunity to practice your pronunciation of challenging Congolese words.

Venturing with God in Congo is published by Conjurske Publications. The durable, hard-cover edition we reviewed is available on their website for $14.99. Whether your kids have read twenty missionary biographies or none at all, this book offers an excellent introduction to the recent work of God in Africa.

Sixty-four families participated in this Crew Review. Be sure to visit the Homeschool Review Crew Blog to discover how other homeschoolers have used this missionary biography and what they liked about it.