In my spare time, I dabble in genealogy. Photos can enhance family history. Often, however, the black and white images I find seem hard to relate to. While watching Genealogy TV this week, I learned about a tool that could breathe new life into old photos. 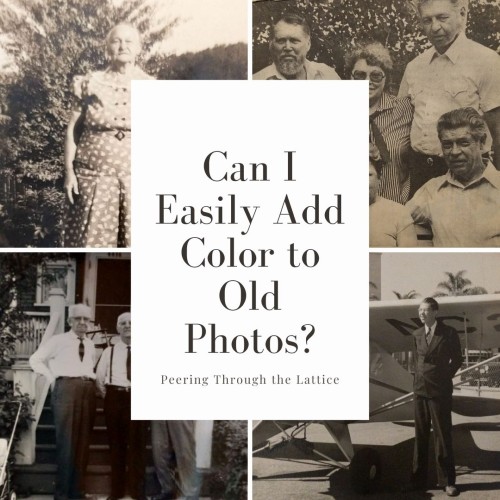 MyHeritage in Color™ can transform a black and white photo into vibrant colors. Faces light up. Clothing becomes more colorful. The vegetation in the background actually turns green. Yesterday, I had fun experimenting with this tool using family photos from our basement.

I started with a photo of three men. The man on the left is my husband’s second great grandfather, Ole Hagen. 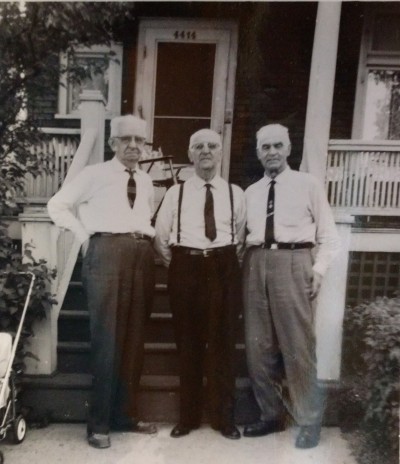 Born in Norway around 1880, Ole immigrated to the US in the early 1900s. He eventually settled in Chicago and became a US citizen. Initially a shoemaker, he later worked in the plumbing industry. By the time this photo was taken, Ole had retired.

On the MyHeritage website, I launched the colorizer and uploaded the photo. Within seconds, I could see the stunning results. 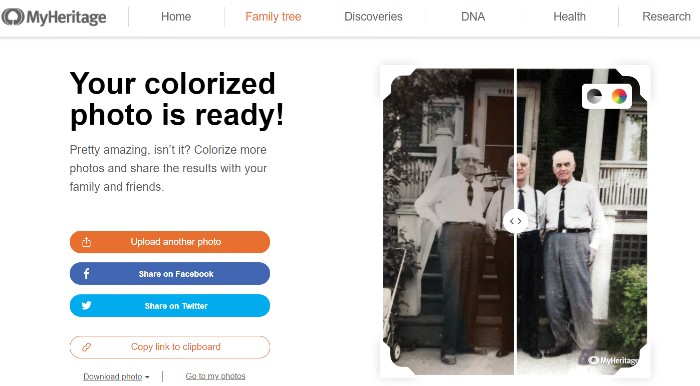 Sliding the divider back and forth, I could shift between the original and the enhanced image. With a couple of clicks, I downloaded the Colorized version of the photo. 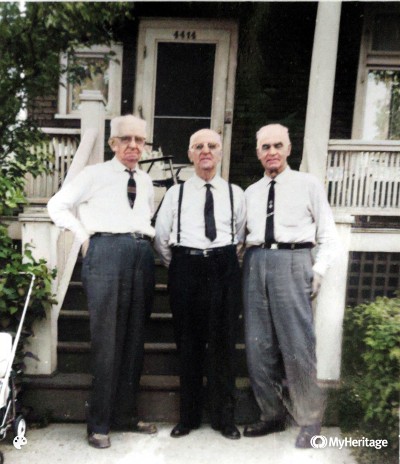 There was also an option to download a Comparison image, containing both the original and the colorized version. 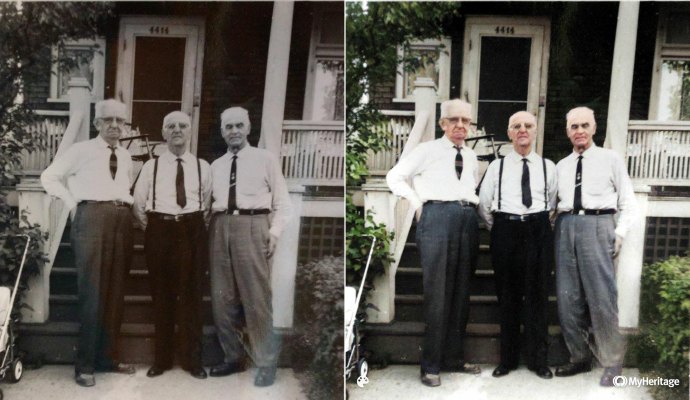 The next photo featured my husband’s grandfather, Sidney Christie. Born in Chicago during the early 1920s, Sidney moved to California as a teenager. Until he was drafted for World War II in the 1940s, he worked for Ryan Aeronautical Company. In the Army, he worked with small arms. Later, Sidney assisted with the Navy’s bathysphere program in San Diego. Eventually, he became a small arms instructor. Possibly taken in the early 1940s, the photo features him by a small plane in California. 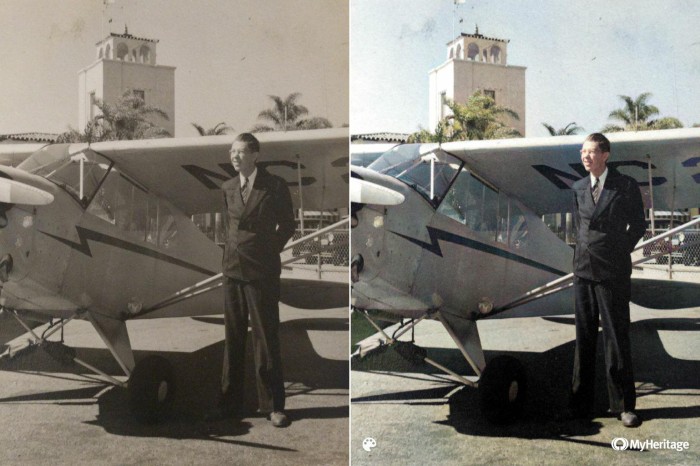 Viewing the colorization, my husband remarked that the hair color was incorrect. He clearly recalls that his grandfather had light brown hair. In fact, Sidney’s World War II draft card from 1942 confirms that he had brown hair, brown eyes, and a dark complexion. The remainder of the photo appears accurate. The coloring of the airplane, sky, and palm trees in the background drew my eyes to details I had overlooked in the original photo.

Among our family photo collection, I found a newspaper clipping from a Pearson family reunion in the 1980s. 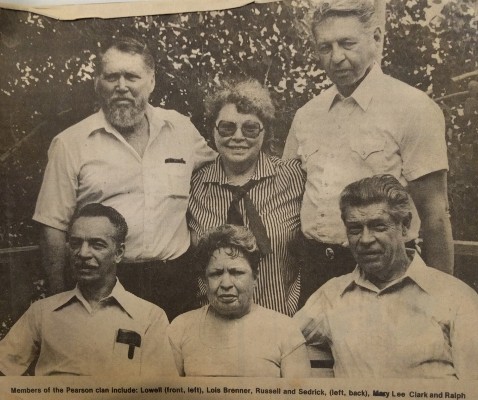 In the right foreground of the accompanying image sat my husband’s grandfather, Russell McClard Pearson. A first-generation American, Russell was born in Arkansas around 1913. After doing farm-related work as a boy, he worked in the dairy industry and eloped with the owner’s daughter. Disqualified from serving in World War II because of hearing difficulties, Russell instead moved his family to California, where he worked for an aircraft plant. After the war, Russell worked for a California dairy. 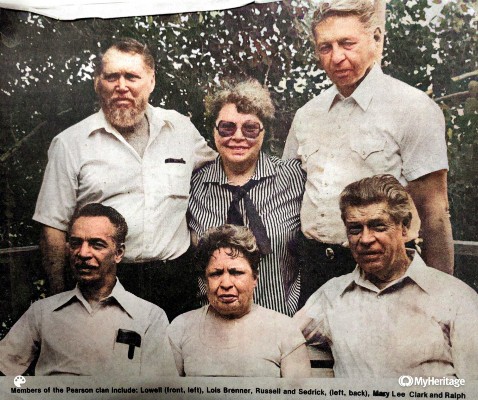 Running the newspaper clipping through the MyHeritage in Color™ tool produced a very realistic-looking image. Russell and his siblings appeared as they may have in the original photo.

The final image is a portrait of Callie Grantham Gibson, my husband’s second great-grandmother. Born in Tennessee during the 1870s, Callie grew up on the family farm. During the early 1900s, she and her husband, John Cannon Gibson, moved the family to Mississippi. While living there, John and several of their children worked at a cotton mill. By the 1920s, they had settled in Arkansas, where they ran a family farm.

After her husband died in the early 1920s, Callie cared for her youngest children until they were married. Then she lived with her son Virgil’s family. The picture I colorized was taken in Arkansas during her days as a grandmother, possibly in the 1950s. 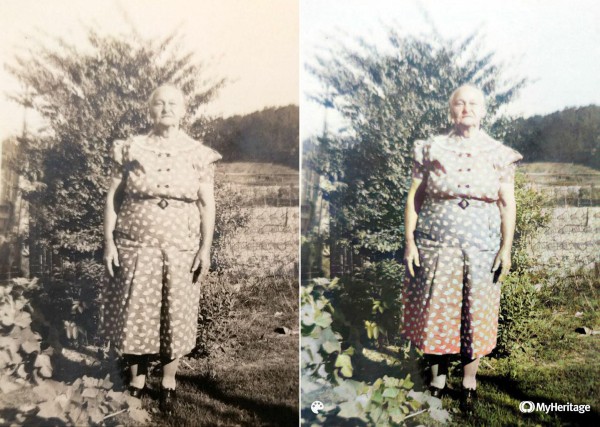 Although the multiple shades on the dress seem out of place, the landscape looks realistic. I am impressed with the results. With color added to these photos, I’m more likely to take a second look and notice something I missed in the original.

Related Content: How to Bring Life to Family History by Colorizing Photos

MyHeritage in Color™ has limitations and may not accurately colorize every image. Their algorithm may overlook a neck, leg, or arm that should have transformed into a skin tone. At times, sections of photos aren’t colorized at all. Without knowing the actual hair or eye color from other historical data, the rendering may be inaccurate. Despite the limitations, it’s a useful tool.

I had fun playing around with MyHeritage in Color™ and sharing the results with family members. Meanwhile, I’m not getting rid of the original image. As my husband accurately assessed, the original is a historical document; the colorized version is a recreation of it.

Do you have some old photos? Until April 23, 2020, you can process images for free using MyHeritage in Color™.