After a satisfying lunch at St Peter’s Restaurant, we boarded the bus. It was a short drive to Capernaum. With renewed energy we entered the seaside town that served as Jesus’ base of operations during his ministry. 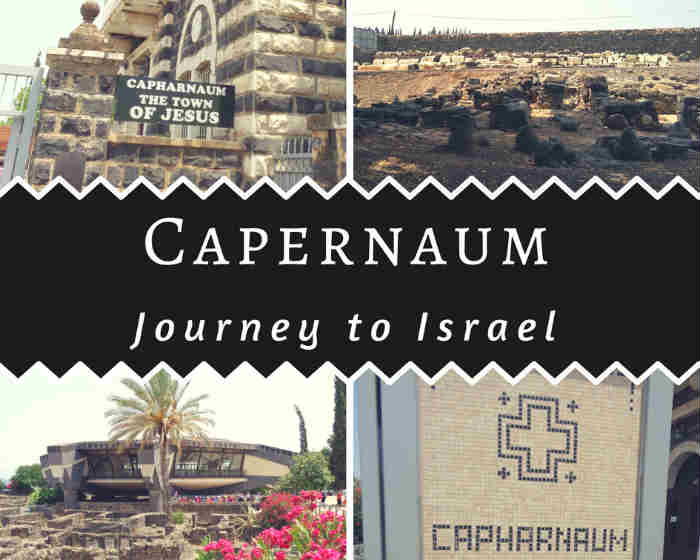 Much of the original town has been excavated. First, we stopped to observe carved stonework recovered from the synagogue. Grapes, pomegranates, stars, figs, and other designs greeted us from antiquity. 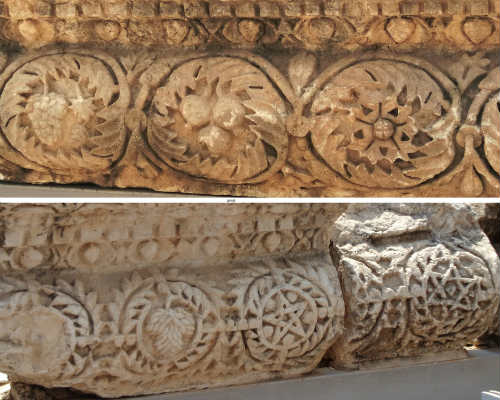 One of the capitals we observed held the image of a menorah. 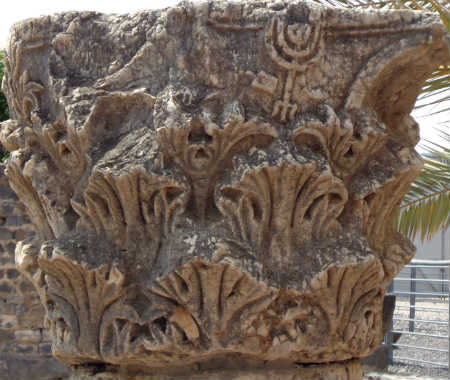 Mika, our tour guide, pointed out the carving of the Ark of the Covenant at the edge of one of the stones.

Vines and flowers adorned other artifacts from the synagogue.

We were glad to move out of the hot sun to a shady spot from which we could see the remains of the small town. Many of the original structures were constructed from basalt. This black volcanic rock which was plentiful in the area during Bible times.

Next, we entered the remains of a monumental synagogue. This structure was built around the fourth century. Beneath us lay the basalt foundation of the synagogue that existed at the time of Jesus.

Two large stone steps line the western wall of the synagogue. We welcomed the opportunity to sit on them. While we rested there, our pastor read a passage in Scripture which mentions the synagogue of Capernaum.

Now when He concluded all His sayings in the hearing of the people, He [Jesus] entered Capernaum. And a certain centurion’s servant, who was dear to him, was sick and ready to die. So when he heard about Jesus, he sent elders of the Jews to Him, pleading with Him to come and heal his servant. And when they came to Jesus, they begged Him earnestly, saying that the one for whom He should do this was deserving, “for he loves our nation, and has built us a synagogue.” Luke 7:1-5 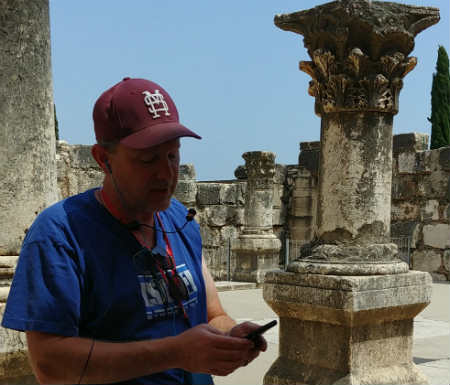 Our pastor went on to explain, “If you look at most synagogues around the Galilee region, they’re not that big—most of them. The one at Nazareth was itty bitty; the one at Chorazim was small. This is huge. This is a mega-church! If you look at the foundation stones, this is big! It’s very probable that this man of whom they’re speaking in Luke 7 could very possibly have built the synagogue that was mentioned.” 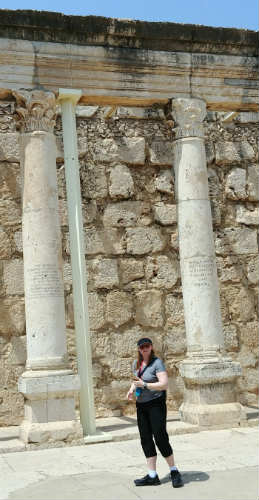 A nearby sign corroborated our pastor’s perspective: “Under the monumental synagogue a basalt-stone wall was found, which is interpreted by the excavators as the remains of an earlier synagogue either of the time of Jesus or a later date. A first century AD stone pavement, found under the artificial podium of the monumental synagogue in the central area of the prayer hall, seems to belong to the synagogue built by a Roman centurion (Luke 7:5).”

The synagogue here was also the site of one of Jesus’ seven “I am” statements: “I am the bread of life.” John 6:35-59 records this statement and Jesus’ explanation of it. 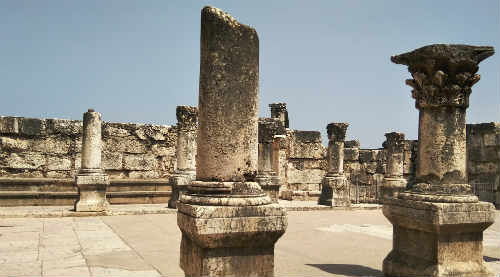 Mika took time to explain how every synagogue faces in the direction of Jerusalem. What about synagogues in Jerusalem? They are oriented toward the location of the Temple.

Continuing southward, we exited the front of the synagogue. Beyond a metal fence we could see more remains of first century Capernaum. 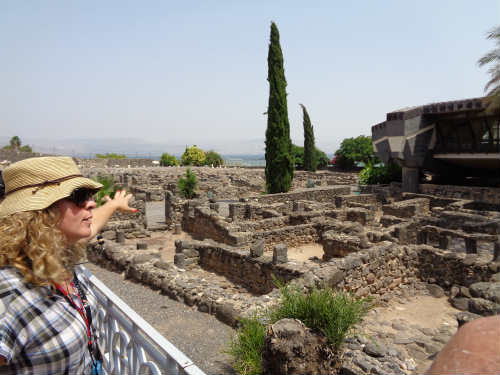 At the edge the ruins loomed a church resembling a UFO. 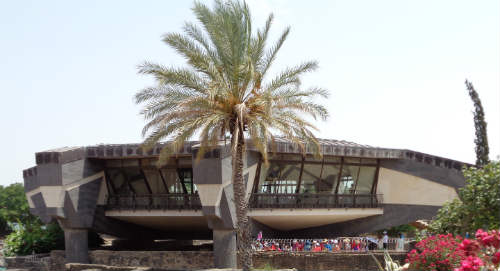 As we explored beneath the strange-looking church, we encountered what I was most excited to see. Simon Peter’s house once stood on this site. This is probably the home where Jesus’ healed Peter’s mother-in-law. Isn’t this also where a lame man’s friends made a hole in the roof to get him to Jesus? What amazing events occured here!

Eventually, an octagonal shaped church was built on this location. Having viewed the ruins from ground level, we ascended the stairs into the church. From inside, we peered through the glass floor to see the excavations from a different perspective. 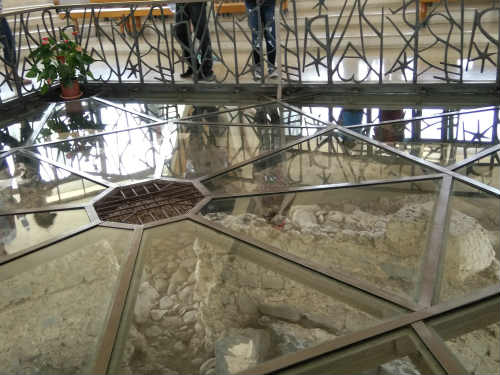 We had explored the archaeological remains as much as we could. It was time to investigate the church we had entered. Built in 1990, this edifice is also octagonal in shape. Each corner displays a wood carving of a scene from the Gospels. 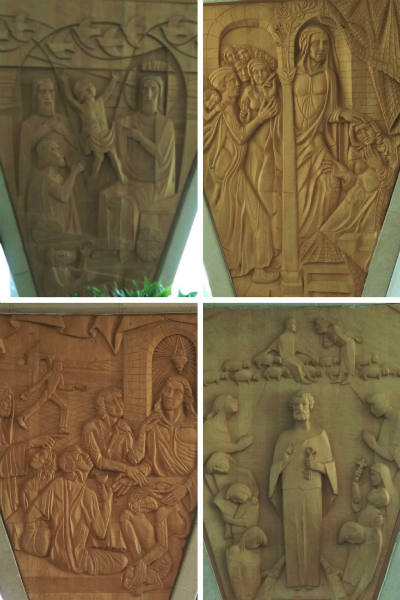 On the wall behind the pulpit, John 6:51 was inscribed in Latin:

I am the living bread which came down from heaven. If anyone eats of this bread, he will live forever; and the bread that I shall give is My flesh, which I shall give for the life of the world. 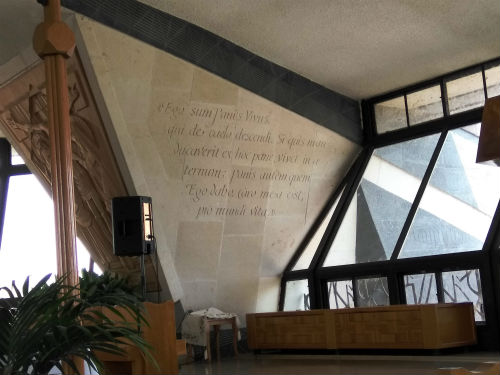 Toward the Sea of Galilee

Leaving the church, we entered a plaza featuring a statue of Simon Peter. His right hand holds the keys of the Kingdom, which Jesus promised to give him. His left hand grasps a shepherd’s staff, reminding us that Jesus asked him to feed His sheep and shepherd his flock. At his feet is a fish. It brings to mind Peter’s occupation as a fisherman before meeting Jesus and his subsequent ministry as a fisher of men. Behind him, the Sea of Galilee beckons. 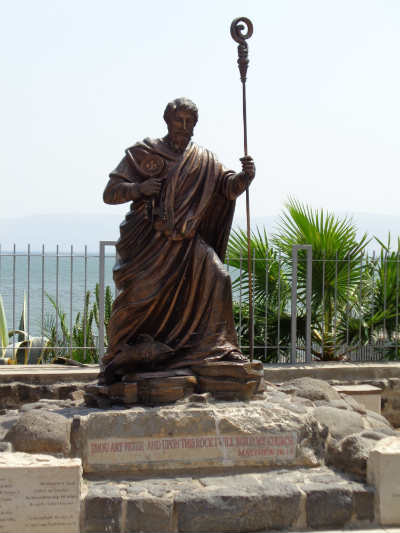 At our next stop, we would learn about the preserved first century “Galilee boat.” Then we would have the opportunity to sail on the lake in a modern boat. I couldn’t wait to experience more of the Sea of Galilee.

Can you recall any other teachings or miracles that occurred at Capernaum? Please share in the comments below.