While watching Drive Thru History with the kids last semester, the story of the “Jesus Boat” intrigued me. It was discovered in Ginosar about 32 years ago. 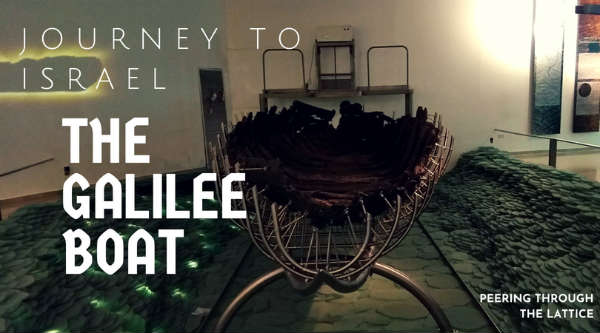 During a period of drought, the water in the lake was very low. Two brothers noticed an oval shape in the mud near the bank of the Sea of Galilee. They called in experts, who identified the protrusion as an ancient boat from around the first century AD.

They wanted to excavate it. Yet the waterlogged wooden boat could not be easily moved without falling to pieces. It took eleven days to remove the structure from the mud. How could they relocate the vessel without it disintegrating along the way? They encased it in polyurethane and floated it out.

Experts slowly removed the polyurethane shell. They submerged the boat in a covered, temperature-controlled pool. Nine years of chemical baths prepared the wood of the boat to be able to dry. The process was slow and painstaking. Some things must not be rushed. 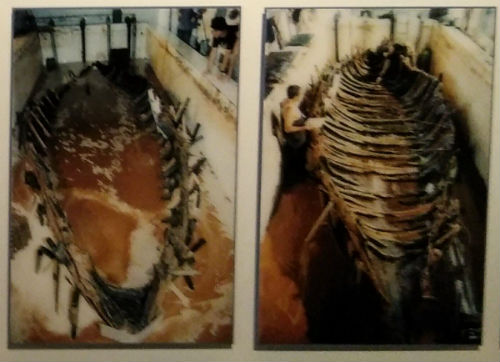 Today, the preserved boat is on display in a Kibbutz Museum at Ginosar. From Capernaum, we drove ten minutes southwest along the upper edge of the Sea of Galilee. 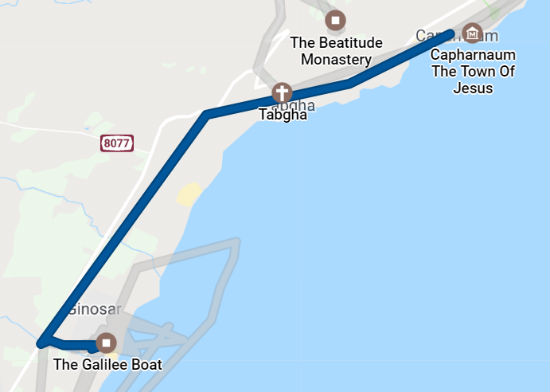 Departing from the bus, our group entered the museum. 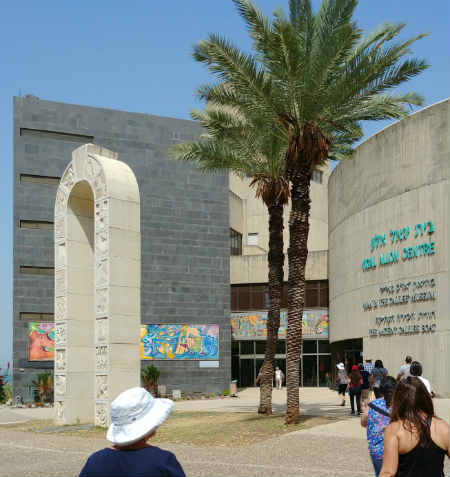 We crowded into a spacious room containing the boat and a large screen. While another group surrounded the preserved vessel, we watched a short movie. We learned about the boat’s discovery and the challenges of removing it from the mud.

By the time the movie was over, the other group had departed. It was our turn to check out this amazing artifact. It rested on raised scaffolding atop a patterned aqua surface resembling water. An image of this type of craft, complete with mast and oars, was projected onto the wall beyond it. 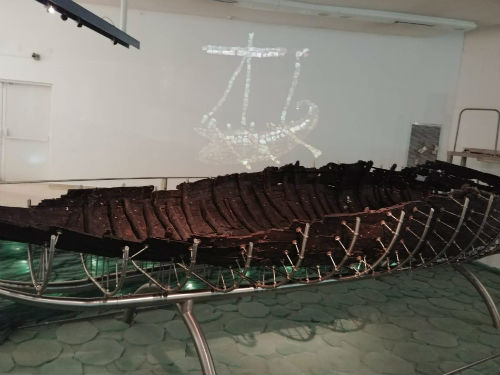 After gazing at the boat, we turned to read the informational display. An entire wall was covered with words and pictures explaining the preservation process.

One area focused on the types of wood used in this ancient vessel. 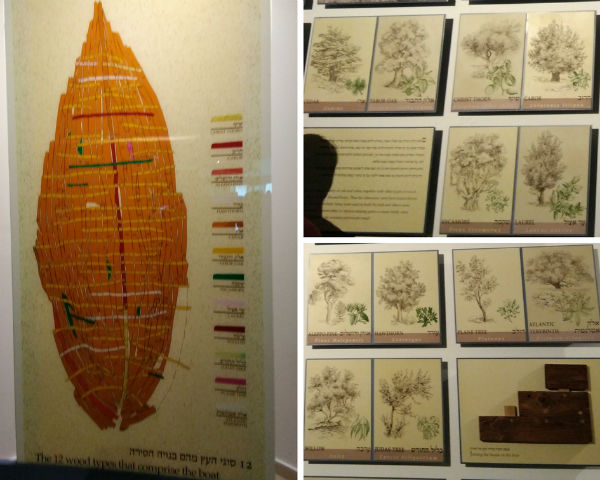 About a dozen varieties of wood were used in its original construction and repair:

It was incredible to see a boat that Jesus might have sailed in. Of course, there is no way of knowing whether He actually did. Seeing this artifact firsthand definitely colors my reading of Scripture though. Fishermen like Peter and John were using this type of watercraft in the time of Jesus.

The Boat in a Storm

I can practically picture Jesus and the twelve crowded into a vessel like this while crossing the lake. There’s Jesus, asleep in the back while a sudden storm rages around the small craft. The disciples take turns bailing water from the boat. Huge waves threaten to batter it into bits. One or two disciples are out of sight, lying as flat as they can. They cling to one another for fear of falling overboard.

Imagine their incredulous faces as they suddenly realize their teacher is sleeping! How could anyone sleep at a time like this?

They scramble to Him in the tossing boat, shake Him awake, and plead for help. Do they expect Him to grab the bucket and help them bail out water? That’s not what happens. Instead, Jesus stands upright in the precariously rocking vessel. He stretches out His hands, and commands, “Peace, be still!”

The wide-eyed disciples cannot believe what happened. During the storm, they had been fearful. Now they are shocked and terrified at the amazing miracle. They had expected to be fish food! Instead, they are safe in the boat with Jesus.

What a whirlwind of an experience! Can you imagine the questions running through their minds? ”Did I dream the whole thing? Was Jesus sleeping, or was I?” Aloud, they ask each other, “Who is this guy? How can he control the weather and quiet the sea?” (Mark 4:35-41)

How do you think you would have reacted to this miraculous event? Would you have been terrified like the disciples or grateful to be alive? Share in the comments below.

Next adventure on our trip: Sailing on the Sea of Galilee. Click here to journey along with me!