A few weeks ago, most of our family spent a week at my parents’ house. We enjoyed connecting with extended family, researching our ancestry, and exploring the C & O Canal. Since my nineteen-year-old daughter has a full-time job, she stayed home to exercise her independence.

While shopping for groceries one day, she spotted a can of coconut milk. Her mouth watered as she imagined how delicious it would be. After bringing it home, though, she could not decide how to use it. When we returned from our trip, it was still sitting unused on the kitchen counter.

For two full weeks, I contemplated an appropriate use for the coconut milk. My fourteen-year-old daughter was considering it as well. One day, she decided to take action.

“Can I make something with that coconut milk?” 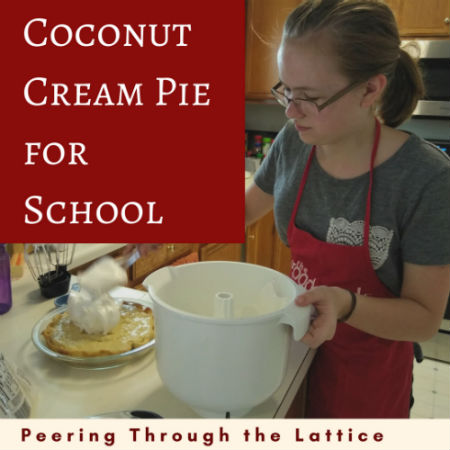 “Sure!” Her older sister quickly responded before heading off to work. My budding chef had completed her schoolwork early that day, so I allowed her to use the kitchen. What would she make?

She searched online for recipes. Finally, she decided to make a coconut cream pie. Since baking a homemade cream pie is pretty complicated, I was skeptical that she would succeed on her own. I allowed her to try anyway.

She abandoned the Internet in favor of the ubiquitous red and white checkered cookbook. While the twins and I continued the day’s lessons, she donned an apron and made a beautiful crust. That was the easy part. She had practiced with a lady from our church while making rhubarb pie a couple of months ago.

“What should I do with the extra dough?”

She had a small amount of dough left. I suggested she press it into a custard cup to make a mini-pie.

We had all the pie ingredients… except for shredded coconut. The recipe called for two cups. What a great opportunity for my daughter to practice shopping on her own! I supplied her with a bit of cash and dropped her off at the entrance to Publix.

Several minutes later, she returned to the car with two bags of coconut. She was afraid that one might not be enough. After all, each bag holds only seven ounces, and a cup is eight ounces. She would need close to sixteen ounces, right? 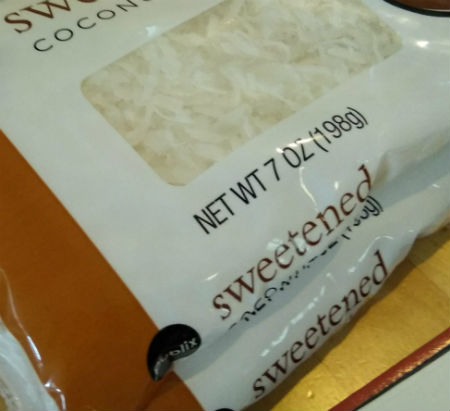 An impromptu math lesson ensued. She now understands that ounces can stand for weight or volume. By multiplying the serving size by the number of servings in the bag, she discovered that each bag held more than two cups.

Pie crust, instant pudding, and Cool Whip was the limit of my experience making cream pies. When I attempted to make homemade pudding years ago, it resembled a thin gravy even when chilled. My daughter set out to accomplish something I never had—preparing a creamy homemade filling. Would she fare better than I had?

Following the recipe, she combined sugar, flour, coconut milk, and almond milk in a saucepan. She heated and stirred them until the mixture was thick and bubbly. It looked and smelled amazing! 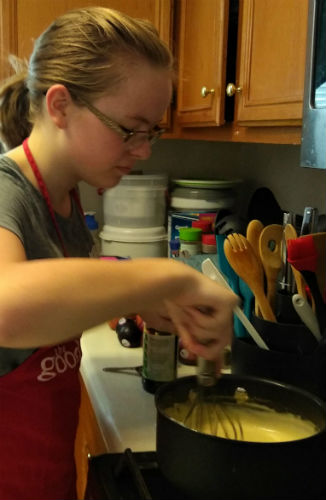 Next came the challenge of separating eggs. She would add the yolks to the filling and save the whites for the meringue topping. But separating eggs was easier said than done. When she cracked the first egg, the yolk broke and mixed with the whites.

Saving the mixed-up egg in a plastic container, she tried again. Success! She used a fresh container when cracking the next egg, in case the yolk should rupture. It was a smart move. She cracked a total of six eggs in her quest for four properly separated eggs. 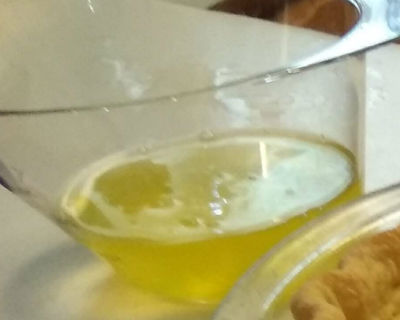 She added some of the warm filling to the egg yolks then added the mixture back into the saucepan. While continuing the stir, she heated it up once more.

“Hey, Mom, can you stir this while I start on the meringue?”

I took a few minutes to help her out. The filling thickened up beautifully. When she realized it was ready, she paused to pour it into the pie shells. 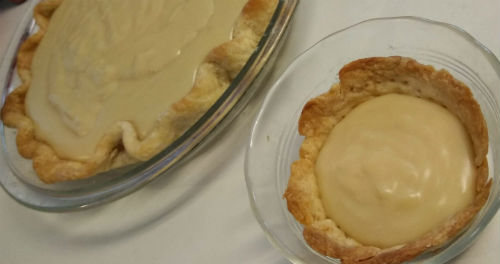 After pouring all she could into both crusts, she had some leftover filling. What should she do with the surplus? Save it in a plastic container, of course! It would make a delicious dessert on its own.

After filling both pies, she spotted the bag of coconut and realized she had missed a step. She should have stirred the coconut into the creamy custard while it was still in the saucepan. Oops! She creatively used a fork to mix the shredded coconut into the pies. 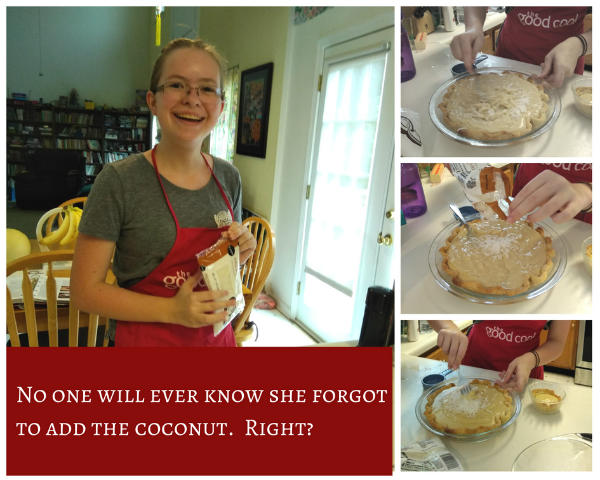 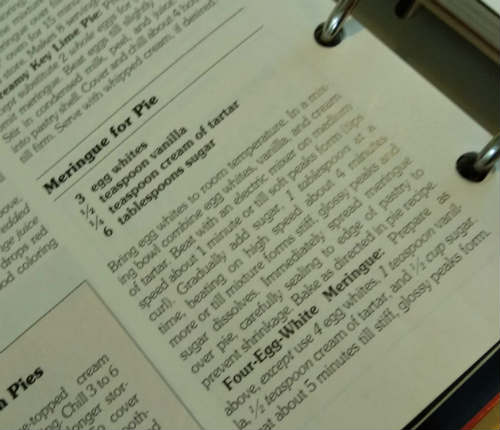 With the filling complete, my daughter concentrated on the meringue. Egg whites, vanilla extract, and cream of tartar went into the bowl of the electric mixer. She experimented to find the appropriate speed to transform it into a light and fluffy meringue. Along the way, she added sugar.

When stiff peaks formed, she knew the meringue was ready. She spread it onto the waiting pies. 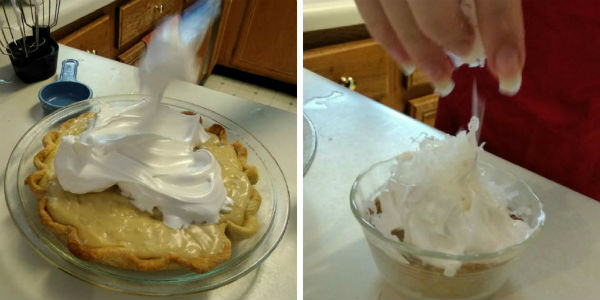 After adding shredded coconut atop the meringue, she baked the pies. The tips of meringue and coconut turned a beautiful golden-brown hue. My daughter placed the pies on a cooling rack and sent her older sister a picture of the finished product. 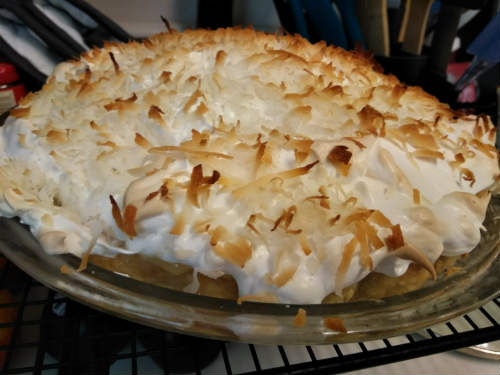 “What should I do with the extra meringue?”

I was amazed my daughter had not used all of the fluffy meringue. I suggested placing a few spoonfuls on a parchment-lined cookie sheet and baking them. The delicious result reminded us of toasted marshmallows. 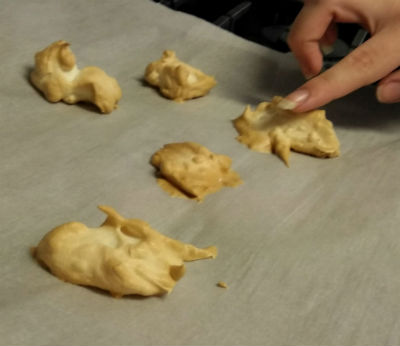 After the pies had cooled for about an hour, she refrigerated them until we finished eating dinner. None of us could wait to sample her masterpiece. We each had a slice of the larger pie for dessert even though it was still warm.

When my oldest daughter returned from work late that evening, her first inquiry was, “Where’s the pie?” She enjoyed a piece as I headed to bed. In the morning, she packed the mini-pie for lunch. Rather than keeping it to herself, she shared it with a co-worker she has been witnessing to. Now that’s cool! 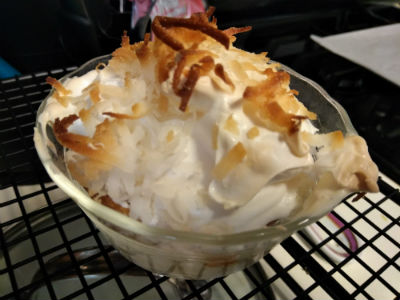 My fourteen-year-old daughter’s determination and ability in the kitchen is impressive. In a single afternoon, she learned cooking skills I have never been brave enough to attempt. Using three different recipes, she made a delicious dessert. I learned that her ability to accomplish a task is not dependent on my experience or confidence. 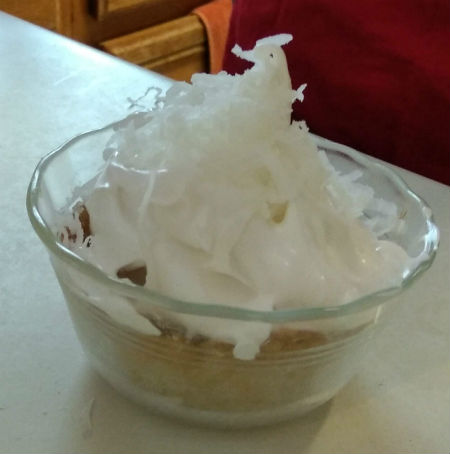 She learned life lessons no textbook could ever teach her:

My daughter practiced being frugal: 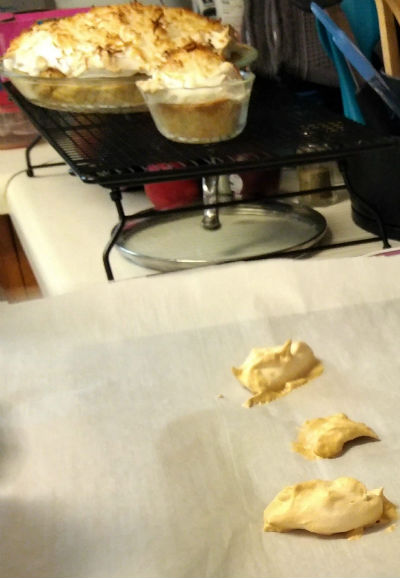 While measuring ingredients, she used math and science skills. Distinguishing between ounces of weight and volume was an important lesson as well.

Of course, she developed cooking skills too:

I am proud of her success. Her repertoire of pie recipes now surpasses mine. With all that she learned in one afternoon making pie, shouldn’t she earn some school credit for it? Absolutely! I urged her to add the time she spent preparing the delicious dessert to her ongoing tally of hours in home economics.

I can’t wait to see what she’ll cook up next! 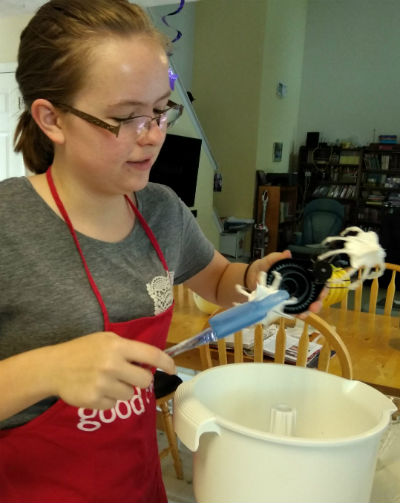 Have any of your children ever outdone you in the kitchen? What did they make?