More than 2,000 years ago, wise men from the east traveled to Israel looking for a new king. For months they traversed the varied landscape, following a special star to the Holy Land. Upon their arrival, they went straight to King Herod’s palace in Jerusalem. After all, a palace is where a king, or even a prince, should live. But the new king was not there.

The chief priests and scribes searched their scrolls and found a prophecy about a great ruler who would be born in Bethlehem:

But you, O Bethlehem Ephrathah,
who are too little to be among the clans of Judah,
from you shall come forth for me
one who is to be ruler in Israel,
whose coming forth is from of old,
from ancient days. (Micah 5:2)

With this new information, the wise men continued on their journey. They followed the star from Jerusalem to Bethlehem, in search of the new king.

On our own journey to Israel nearly six months ago, we traveled that last leg of the journey to Bethlehem, just as the wise men did so many years ago. Like the wise men, we wondered, “What will we find there?” 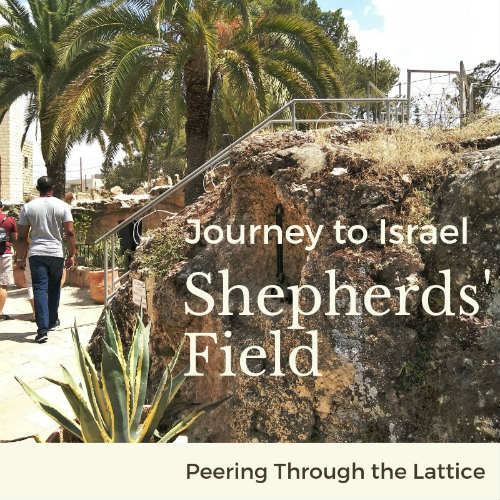 For the wise men, the twelve-mile trip may have taken a few hours by foot or swaying atop a camel. We enjoyed a short 35-minute ride on a comfortable, air-conditioned bus.

The “Little Town of Bethlehem” is not in modern-day Israel. It is part of the Palestinian territory. Israelis like our tour guide were not permitted to enter. 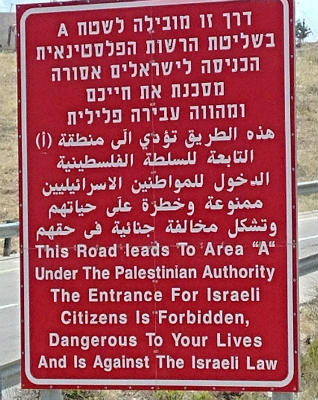 Mika said goodbye in Jerusalem before sending us off. We would meet up with an ethnic Christian guide in Bethlehem.

Mosques came into view as we approached our destination. 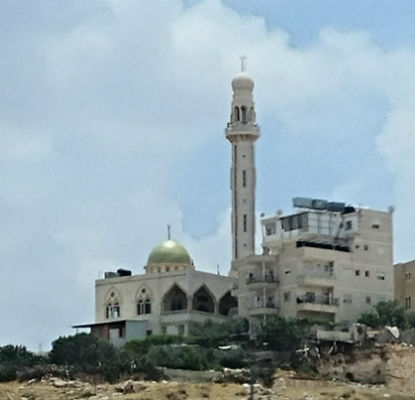 Our first stop was the Shepherds’nai Restaurant. A delicious meal would give us the strength we needed for the afternoon. We feasted on a variety of salads, pita bread, cinnamon-skewered meatballs, chicken, and fries. Baklava and coffee rounded out our meal. 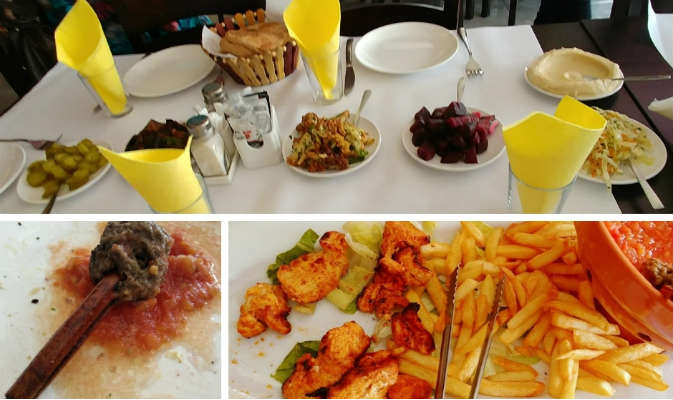 Through the windows surrounding us, we could see the hills of Bethlehem. To the wise men’s eyes, those hills would have been bare, perhaps speckled with shepherds caring for their sheep. But in the twenty-first century, the hills are covered with buildings of all shapes and sizes.

As the waiters cleared the tables, we walked across the street to the shepherds’ fields. We passed under an archway reminiscent of the angelic message on the night of Jesus’ birth. 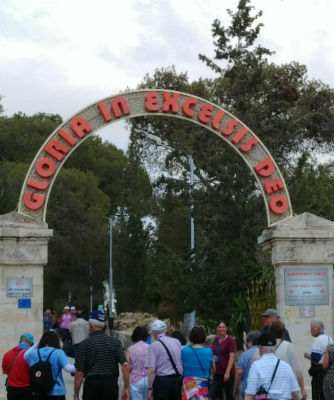 Following the pathway, we came to a fountain topped with the statue of a shepherd. Three sheep were carved at its base. 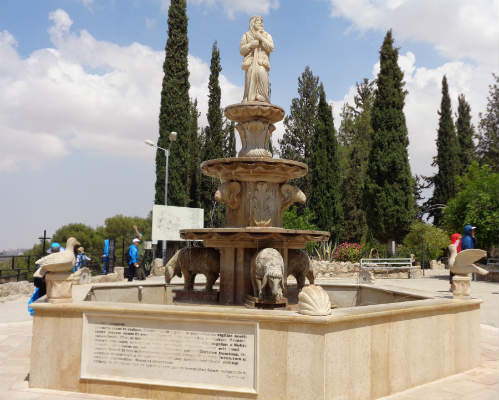 Nearby was a convent, built on the site of a cave that once sheltered shepherds. 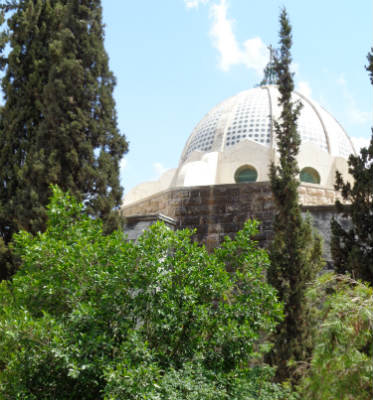 We approached the building which houses the shepherds’ cave. Atop the entrance stood a cross made of stone. Twin lanterns on the facade would light the way for evening worshippers. 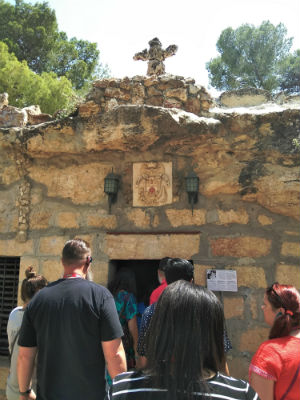 Our feet brushed across mosaics declaring glory and peace as we crossed the threshold.

The cave now serves as a chapel. We sat on simple wooden benches and observed our surroundings. 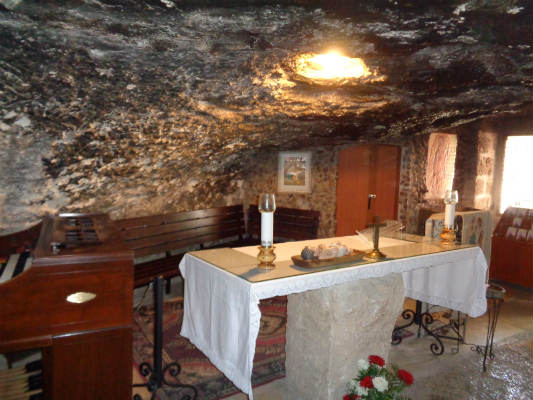 The ceiling was black from the smoke of shepherds’ fires. An organ sat off to one side. At the front, a table displayed an infant Jesus, candles, and a cross. While seated inside the chapel, we lifted our voices to sing a Christmas hymn. 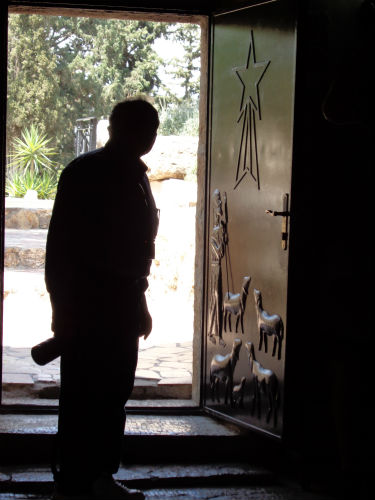 Walking back outside, we passed by the fountain once more. 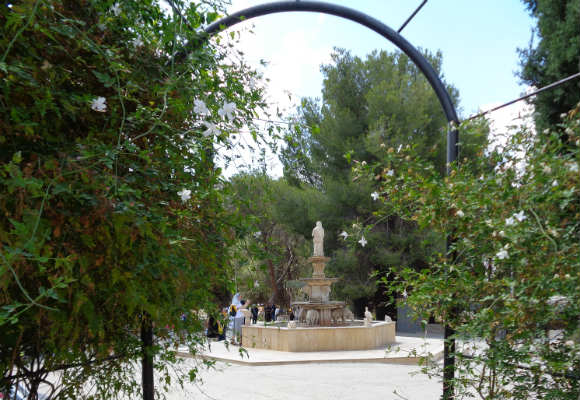 Beyond it lay the remains of a Byzantine-era church and monastery. We took a quick peek before returning to the bus. 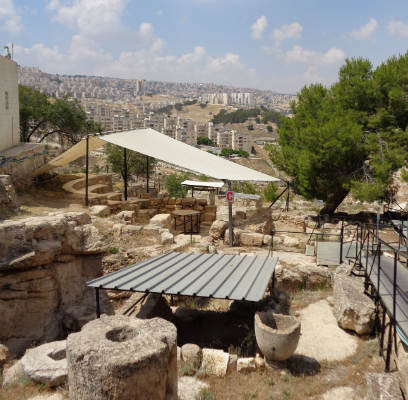 It was refreshing to be out in the open that afternoon, exploring historical sites of the Bible. Although museums like Yad Vashem can be quite informative, I traveled to Israel to experience places like Bethlehem.

Looking back on my visit to the shepherds’ field, I still want to experience more. What would it have been like to be one of the shepherds at night, watching over a flock of sheep? How would I have reacted when the sky lit up with heavenly fireworks and angelic music? After their announcement, would I have dropped everything and run to the manger where the Christ-child lay? That would be our next stop—the Church of the Nativity.