Fifteen years ago I purchased our first Sonlight curriculum package. Together, I snuggled cozily on the couch with my two kids to read picture books and novels together. I appreciated the literature-rich approach to learning, and my kids thrived on it. Within a couple years, though, we added three more children to our family. Crying babies interrupted otherwise fascinating read-alouds. When my youngest kids reached school-age, the thought of using multiple levels of Sonlight at the same time overwhelmed me. I abandoned the curriculum in favor of a more traditional approach.

While my youngest girls were studying American History using ACE PACEs a few years ago, a friend gifted me her used Sonlight American History curriculum. I was thrilled to supplement their PACEs with the amazing read-alouds. Although we all enjoyed the wonderful books, I was not ready to shift completely to Sonlight. After all, I was still homeschooling five children.

Last year, my second child graduated. With only three kids left at home, could we use Sonlight? 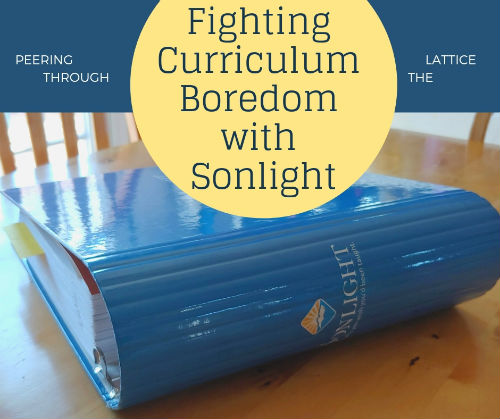 Over the summer, I browsed their website again to see if it was a realistic option. Knowing my older daughter would not want to do the same level as her younger sisters, I considered purchasing two Sonlight Cores…until I glanced at the prices. With a sigh of regret, I dismissed the option. I made a couple small curriculum purchases elsewhere and filled in the gaps with resources I had collected over the years.

Several weeks into our fall semester, it became apparent that my older daughter’s literature and social studies textbooks were not a good fit for her. Exploring curriculum websites together, she and I searched for alternatives. Because she was constantly asking for book recommendations, and our textbook approach to learning had not worked, I could not stop thinking about Sonlight. Should we take the plunge?

It was the first option my daughter really got excited about. Seeing her enthusiasm, I decided we would find a way to use Sonlight. 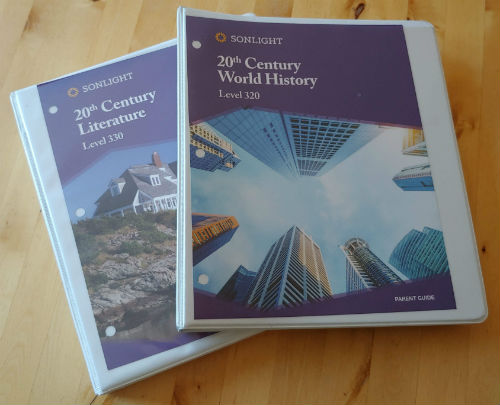 After purchasing a used Instructor Guide and Student Guide, I bought many of the books used, either at Amazon or 2nd & Charles. Checking out books from the library could have saved us even more money, but my daughter insisted on owning the books herself. That way she could highlight and take notes in them. Within a couple weeks, she was ready to dive in. 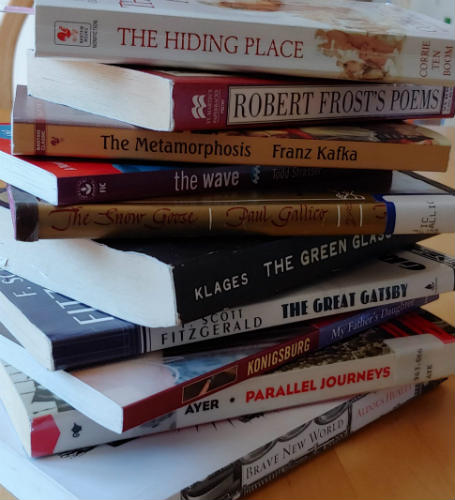 At first, it was a bit rough since my daughter is on the lower fringe of the age/grade range for the package she chose—20th Century History & Literature. Even though the high school course has no read-alouds, I quickly realized that I needed to read as many of her books as I could. Then I would be better equipped to help her engage with the challenging literature.

When she wasn’t looking, I “borrowed” The Great Gatsby, understanding it on a much deeper level when I read it in high school. Voraciously, I plowed through Brave New World. I digested just enough of All Quiet on the Western Front to discuss it intelligently with her. I also relied heavily on the notes, questions, and answers in the Instructor Guide.

Reading the material on my own, I began to understand more about the years my parents, grandparents, and even great-grandparents grew up in. The books breathed life into the 20th century and made me eager to learn more.

I selected a few Sonlight books, like The Great Brain and The Hiding Place, as read-alouds for the entire family. My daughter seemed to learn more effectively when I read to her, and her siblings enjoyed the stories too. Within a few weeks, I was so pleased with Sonlight that I began daydreaming about using their materials with the twins.

As I window-shopped on the Sonlight website, my eyes fell upon a course I had wanted to do fifteen years ago when my kids were all too young for it—Eastern Hemisphere. Could the twins and I use it to study Asia and the Middle East next year? Disappointment clouded my eyes when I realized that they were already at the top of the age range. By the next school year, they may be too old for that particular core.

As I continued to contemplate the curriculum, a cautious smile lit my face. Could I justify adding that curriculum this year?

Since the twins love learning about Asia, I suspected the Eastern Hemisphere material would be a perfect fit. The curriculum would fill gaps in their understanding and mine. Much of what I learned in school and have taught so far has been focused on the western world.

I took a quick inventory of what the girls were already studying. Realizing that we could set aside the literature program they had begun, I began making room in their schedule for Sonlight. From Ebay, Amazon, and the library, I secured all the titles we needed. 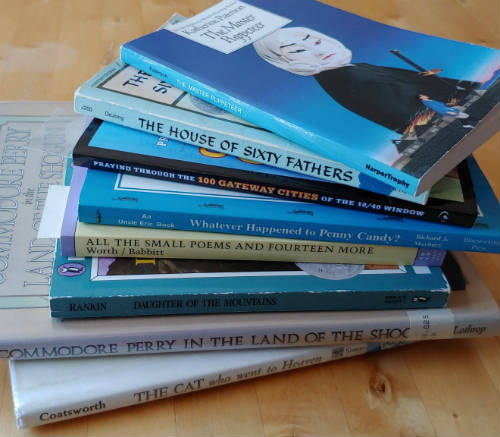 We began our literary tour in China. Sonlight balances engaging read-alouds like Kung Fu of the Upper Yangtze with nonfiction works, including articles from the World Book Encyclopedia. (My SchoolhouseTeachers membership includes World Book Online.)

From China, we took a short excursion to Korea. Because this part of the world is often in the news, the curriculum helped me better understand current events. We supplemented the Sonlight books with a short novel about a boy who escaped from North Korea. 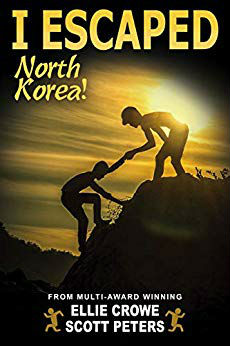 The highlight so far has been our study of Japan. Both twins love everything Japanese and have even learned to speak some of the language. I was humbled when trying to pronounce the Japanese names in our read-alouds—the girls were more than willing to correct my floundering attempts at the strange syllables. 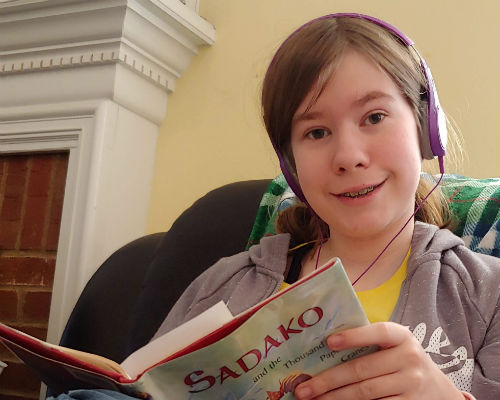 Their enthusiasm has rubbed off on me. As we read, I was amazed to discover how long feudalism dominated that country. I became so fascinated with the Japanese culture that I found a historical fiction novel to read for myself—The Samurai’s Heart. In an era when Christianity was outlawed in Japan and foreigners were forced to leave, some believers were martyred and many met secretly. Even though the unfamiliar character names made the story confusing at times, I completed the book, adding to my understanding of this mysterious country. 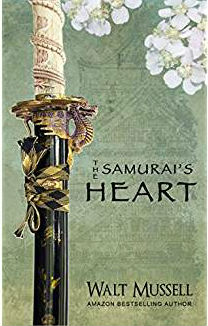 Next week our armchair tour will land in Russia, a significant country for me since my three sisters were born there. I wonder what fascinating new things we will learn.

This is definitely the ideal year for us to tackle Sonlight’s Eastern Hemisphere core. Since the twins are at the older end of the age continuum for this level, they can complete much of it independently. Because of their maturity and prior interest in the topic, both girls are benefitting more from the study than they would have a year or two ago.

Loving to Learn with Sonlight

The biggest surprise since we started using Sonlight again has been my older kids’ interest in the books. While the twins and I were reading The Master Puppeteer, a novel set in Japan, my twenty-year-old daughter listened from across the room. One day our reading ended right before the climax. Hours later, while she was at work, she texted me about the story, asking questions and trying to decipher the puzzle of the plot. I was thrilled that she and the twins were all engaging with the book on such a high level.

She’s not the only one who’s been listening in though. Even though my son read The Hiding Place for his own schoolwork a couple years ago, I noticed him listening intently as I read the first chapter aloud. And when my husband hears me reading our Sonlight books, he often makes comments which add to my daughters’ understanding.

Do you remember my high school daughter who was reluctant to learn with her younger sisters? Occasionally she interjects a comment while I am reading to the twins. When I discuss the questions in the Instructor Guide with my youngest daughters, she sometimes offers her opinion.

The best thing about Sonlight, though, is that I am actively learning. Over the years, I have realized that using the same homeschool curriculum level over multiple years with different kids is boring for me. Since we started using Sonlight this year, I am definitely not bored!

Planning for Next Year

I’m already contemplating which Sonlight Core to tackle next. 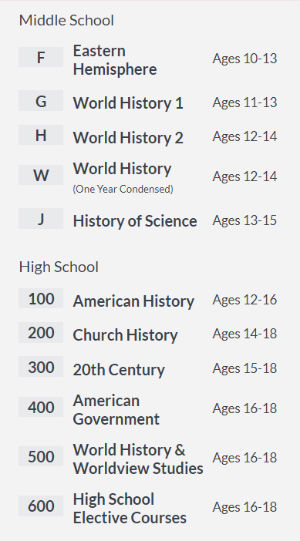 World History 2 might be a great fit for the twins next year since we’re reading Mystery of History, Volume II this year. Sonlight picks up right where our book ends.

Oooh! Did you see the History of Science package? The twins love science so much that I know it would be a great fit. I’d love it too!

If I could convince my older daughter to use the same program as the twins, we could all study American History together!

Of course, we still have about 26 weeks left in the Eastern Hemisphere Core. Since we will take a break for summer, it should last us well into fall. That gives us plenty of time to decide.

If you have used Sonlight in the past, please tell me what your favorite Core was!