Have you ever heard of Masada? Until we watched Drive Thru History—the Gospels last year, I had never heard of this wilderness fortress near the southern end of the Dead Sea. It was one of Herod the Great’s many marvelous building projects. In June, my husband and I had the chance to visit Masada. 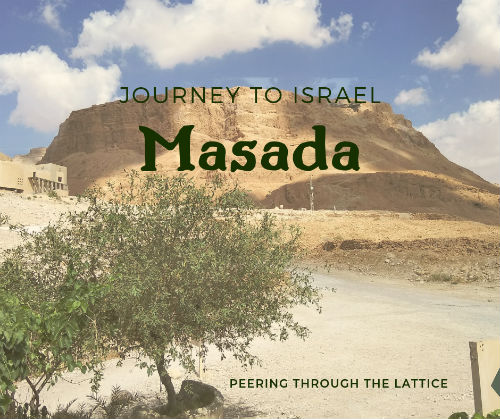 Approaching the historic site, I was completely oblivious to the tragic event that had unfolded there in the first century.

Escaping from the Romans

Before exploring Masada on foot, we paused in the visitor center to watch a short movie which explained the woeful tale. After the Romans had destroyed the Temple in 70 AD, a group of Jews fled to this mountain fortress. Surely they would be safe on such high ground!

It was only a matter of time before the Romans tracked them down. Setting up camp at the base of the cliff, the army began building a siege ramp to capture Masada. There was no escape.

When the Romans completed their ramp and ascended to Masada, silence greeted them. Where had the Jews gone? All but a handful of women and children had killed one another or themselves rather risk Roman capture and torture.

When the movie was over, we filed out of the theater and climbed aboard a tram for a three-minute ride to the top. 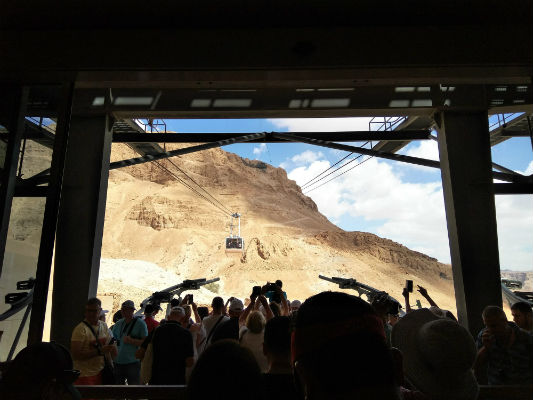 Peering through the windows of the crowded tram, we could see a footpath snaking its way up to the top of the mountain. The trail is aptly named the Snake Path. 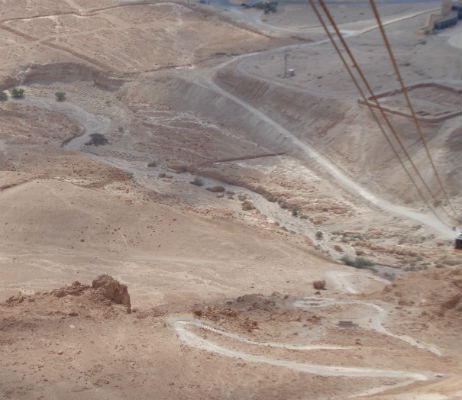 The view at the top was breathtaking. We could see the Dead Sea off in the distance.

The locations of the Roman encampments were marked out below. 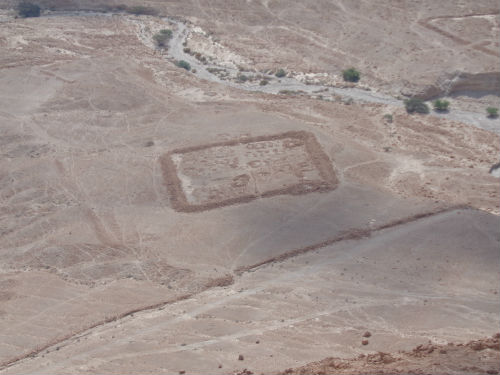 From the tramway exit, we traversed a wooden walkway suspended alongside the cliff.

Tristram’s Starling, which is native to this part of Israel, cheerily greet us. We continued to sight this species as we explored. 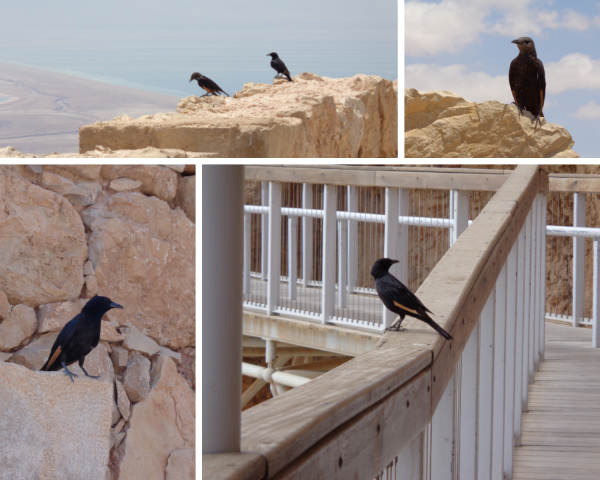 Once our feet were on solid ground again, we paused at a 3-D model to get the lay of the land. 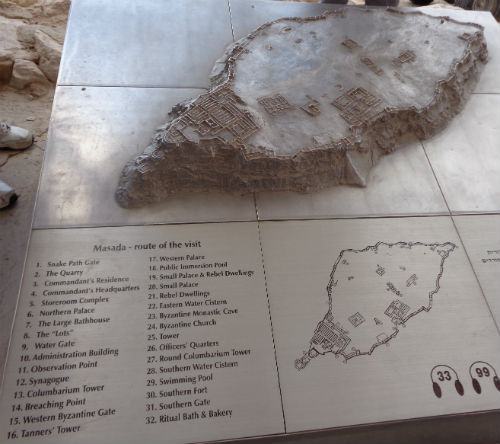 Then we followed a paved pathway as we explored Masada. Though some of the walls were crumbling, a number of buildings still stood. 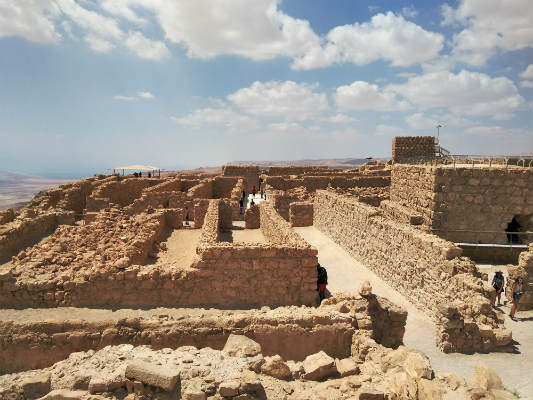 Inside the remarkably-preserved Commandant’s House, we observed the original frescoes. 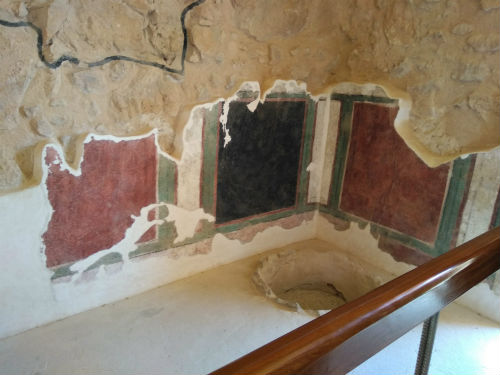 Further on, we entered one of several storerooms. As we rested in the shade, Mika, our tour guide, told us more about their purpose. These long rooms once held food, weapons, and other supplies.

At the northern end of the mountain, Mika showed us a 3-D model of the original palace structure. 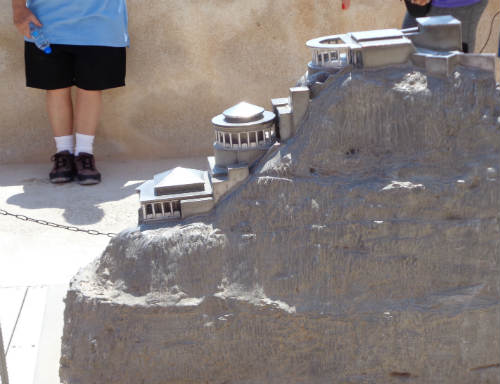 Looking over the side of the cliff, we could see part of the palace still standing. 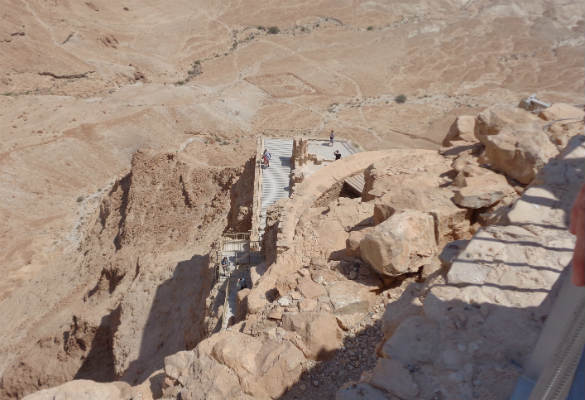 Next, we walked to the bathhouse. In the hot, dry weather, we would have welcomed a refreshing bath. Unfortunately, the Roman-style facility was no longer functional. We ambled through, pausing to check out a scale-model which depicted the original complex. 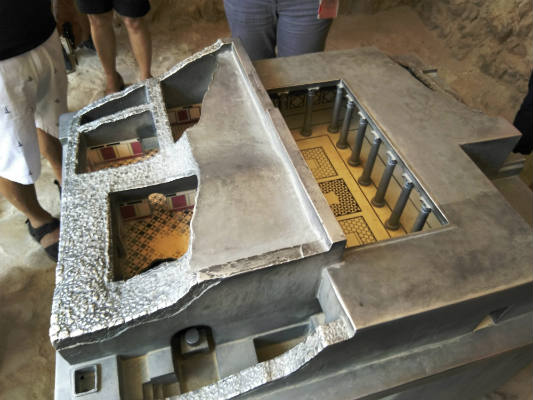 Inside the bathhouse, remnants of the tile floors and frescoes, which had decorated the once-beautiful building, caught our eye. The complex was comparable to the bathhouse we had toured at Beth She’an earlier in the week. 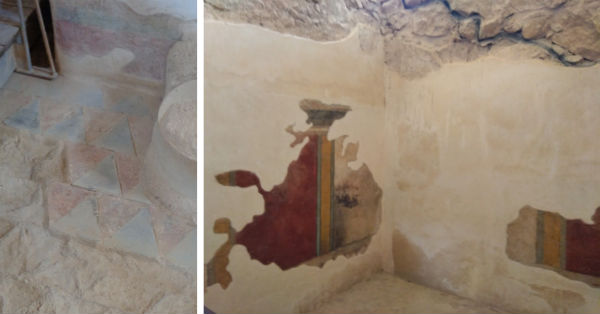 Next, we paused the investigate the site where “lots” had been discovered. On the night before the Roman army broke through to Masada, the Jews realized they would be facing a losing battle. It would be better to die at their own hand than face capture and torture by the Romans. The leaders drew lots to determine who would be responsible to kill the others and then face the tough task of committing suicide. 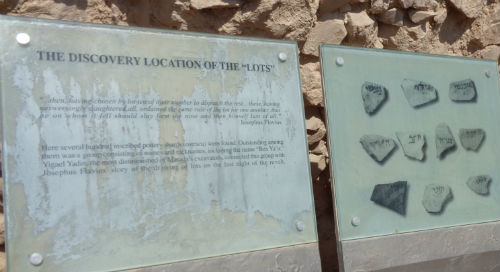 Continuing across the mountaintop, we approached a model of Masada’s water system. Rain at higher elevations rushes towards the low-lying Dead Sea and often causes flash floods nearby. Manmade canals diverted rainwater to cisterns, which could easily be accessed from Masada. 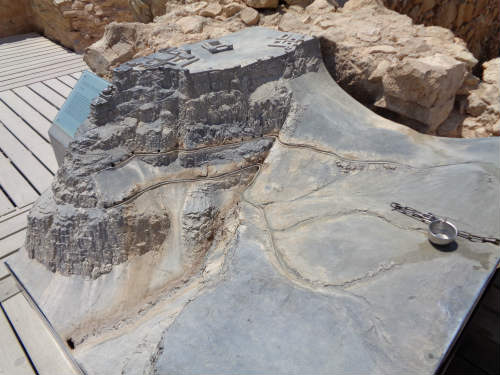 We paused farther on to explore the remains of a synagogue.

Then we continued on toward the breaching point, through which the Roman army had entered Masada.

The final stop on our morning tour was at the remains of a Byzantine church which once stood atop Masada. 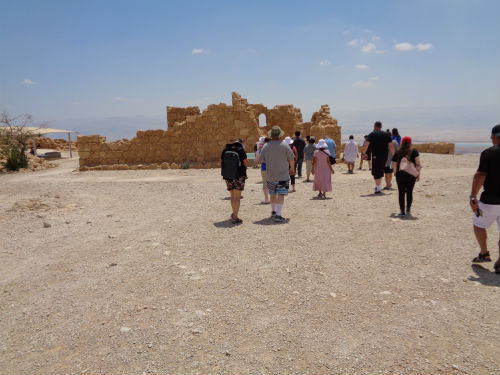 We paused to admire the tiled mosaic floor and the decorative stones on the crumbling walls. 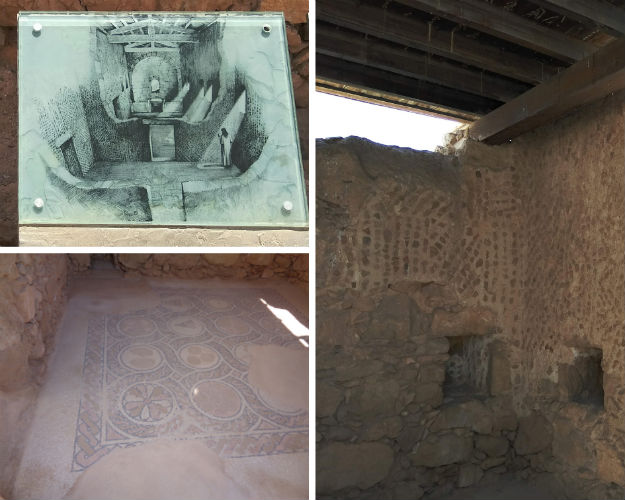 By then, it was midday. We were ready to find shelter from the sun and food to eat. We gratefully boarded the tram to the visitor center. After a quick bite, we explored the museum. Audio headsets sensed when we left one exhibit and approached another. The museum experience retold the story of Masada in a pleasantly air-conditioned setting. Unfortunately, no photos were permitted, but I highly recommend the journey through the museum.

Before we knew it, our time at Masada was over, and we boarded the bus. Next, we would drive to the northern end of the Dead Sea to float in the super-saturated saltwater. 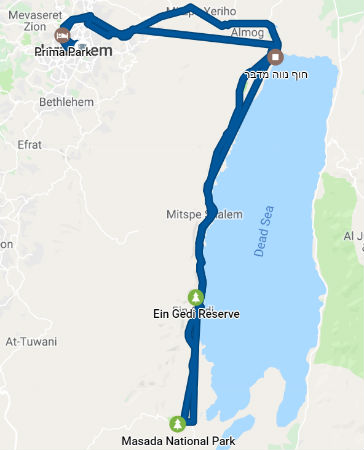 Although I did not know it at the time, our visit to Masada gave me a preview of a history lesson I would be teaching my twin twelve-year-old daughters two months later. Imagine my surprise when I opened their textbook, Mystery of History, Volume II, and discovered a whole section on Masada! To supplement that day’s lesson, the twins and I clustered around my computer and clicked through the pictures my husband and I had taken during our visit.

Have you been following along on our Israel journey? This entry is part of a series of more than 30 blog posts, which chronicle our visit to various sites. Click here for easy access to all of them.