When a family friend invited us to spend the weekend in his mountain cabin, how could we say no? Although modern conveniences like cell signals would be inaccessible, quality time as a family would be worth the sacrifice. 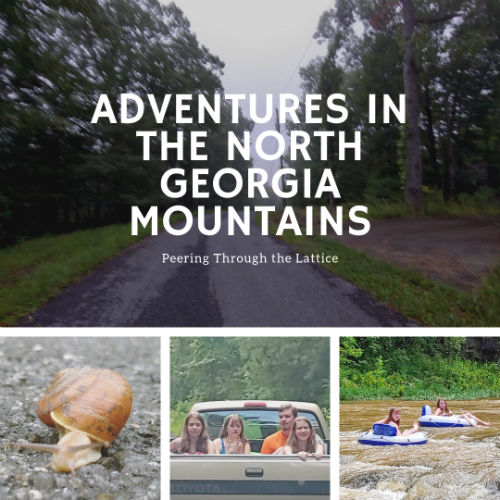 An Evening in the Cabin

As soon as our guys finished work last Friday, we made a beeline for the mountains. Our host greeted us with a delicious dinner, and we enjoyed exploring his surprisingly spacious cabin and the nearby creek. 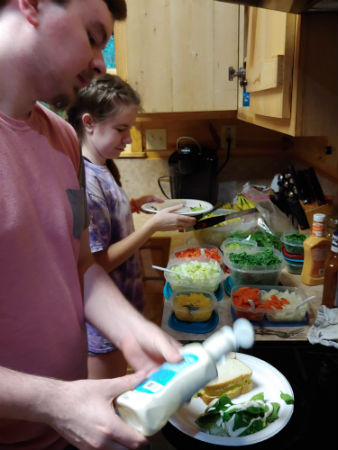 After giving dinner some time to digest, we sang “Happy Birthday” to my sister-in-law. German Chocolate cake made for a delicious dessert. 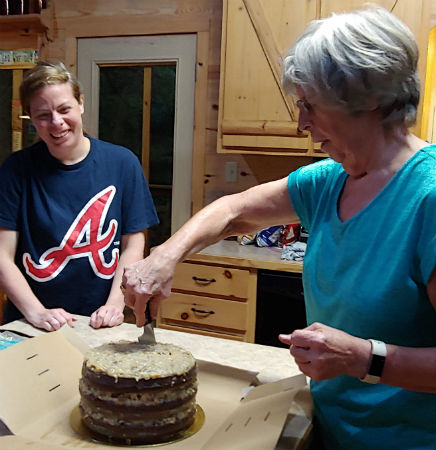 We spent much of the evening relaxing, chatting, and playing card games. Meanwhile, my kids were fascinated by the stuffed wildlife decorations. 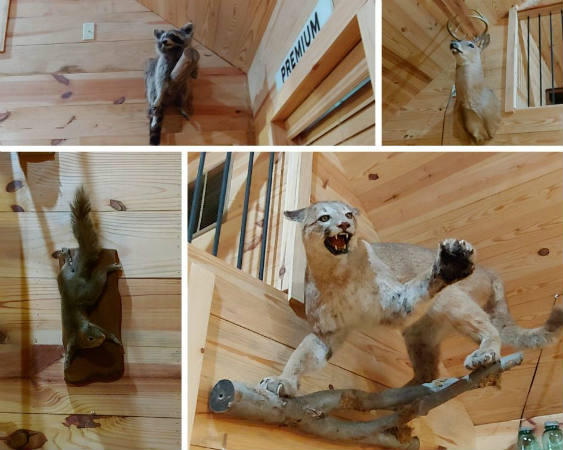 After a late-night movie, we headed to bed, dreaming of plans for the next day.

Navigating the Mountain on Foot

When Saturday morning dawned, I grabbed water and walking shoes. Then I hit the road with my mother-in-law. Turning left, we encountered a steep hill that went straight up the mountain. Pausing at a pond near the base, we listened as a frog croaked his morning greeting. 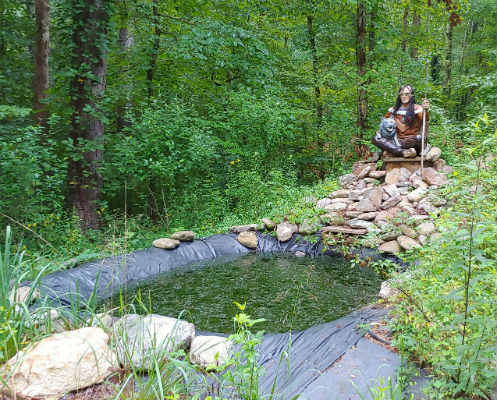 Unable to snap a picture of the camera-shy creature, we began our ascent. We climbed at a steep angle for more than half a mile before the road leveled off enough for us to catch our breath. We continued for another mile before making the wise decision to turn back. 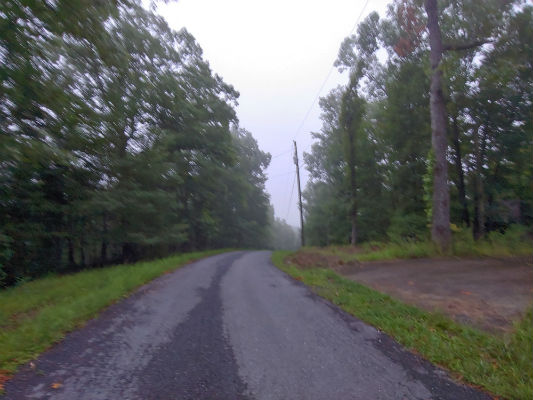 Along the way, we paused to admire a snail inching slowly up the mountain. 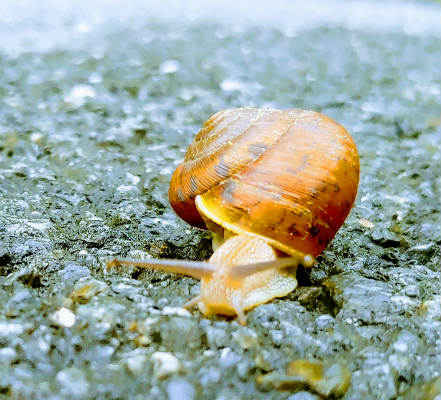 Although I expected the return trip to be easier, my knees started complaining when we were halfway down the final hill. Thankfully, we made it back to the cabin with no problem. After all, we couldn’t use our cellphones to call for help!

A Relaxing Morning at the Cabin

The kids were all awake when we returned. After a quick shower, I began brewing coffee. While our host prepared brunch, our crew crowded around the kitchen table to snack on bacon and play Settlers of Catan with Grammy. 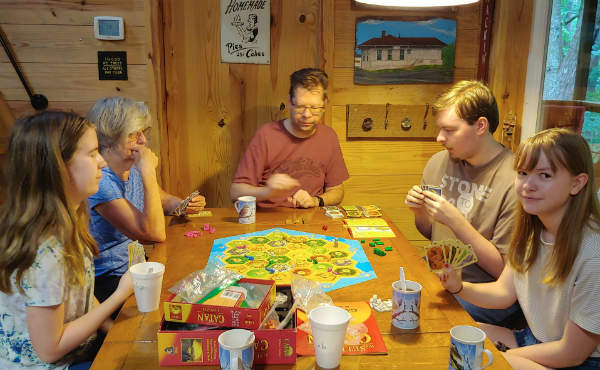 With brunch in our bellies and the kitchen cleaned up, I headed to the back patio and listened to the rain falling through the trees. We could hear the creek gurgling a few yards away. 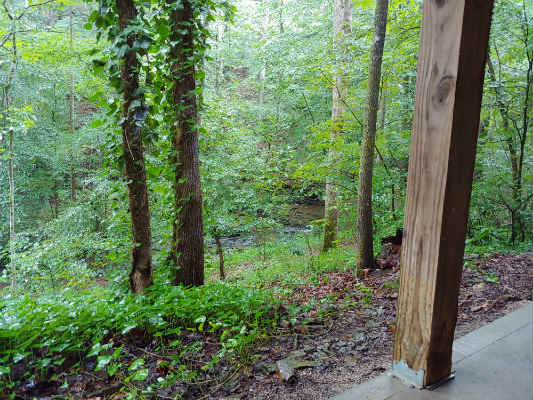 While some of the kids explored the art studio, one of my daughters curled up on the sofa to read a book. 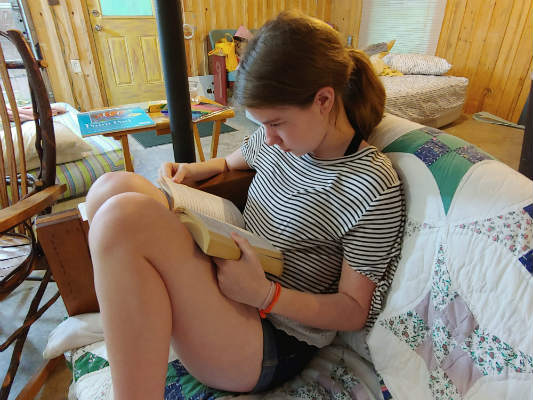 Tubing in the Creek

Shortly after noon, the rain stopped, signaling the perfect time for a swim. Opting for nature’s swimming pool, we drove to a deeper section of the creek. On the creek bank, we admired a beautiful black and blue butterfly. 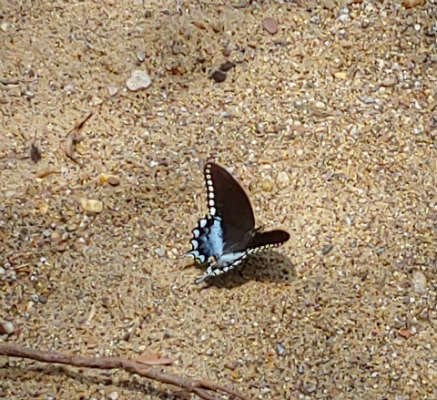 Our host inflated some floats he had recently found. The creek was the perfect spot for tubing. 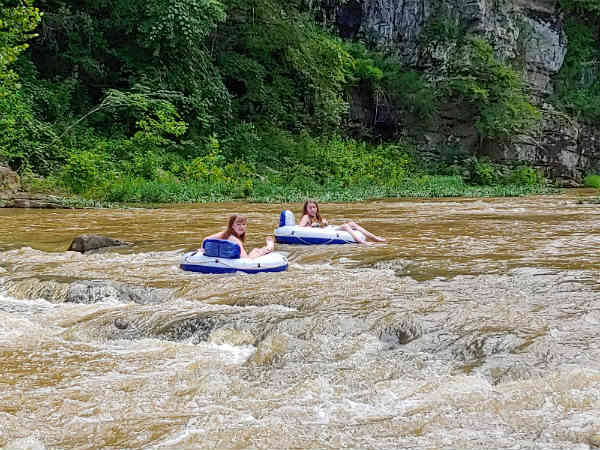 At one point, my husband had to slip off his Croc to allow an agitated crawfish to make an escape. 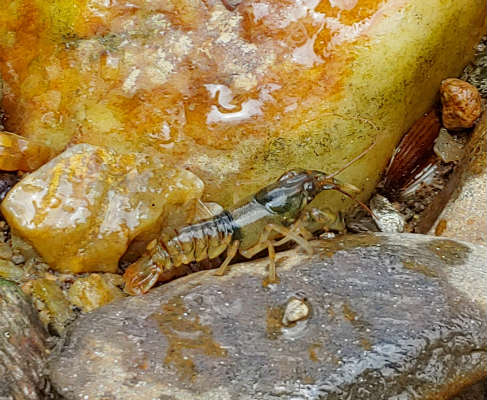 Realizing we’d left the cabin without sunscreen, I called a halt to our outdoor activities before the kids began to resemble lobsters. Since they were all wet from the creek, we let them ride in the back of a pickup truck—a rare treat for my suburban family. 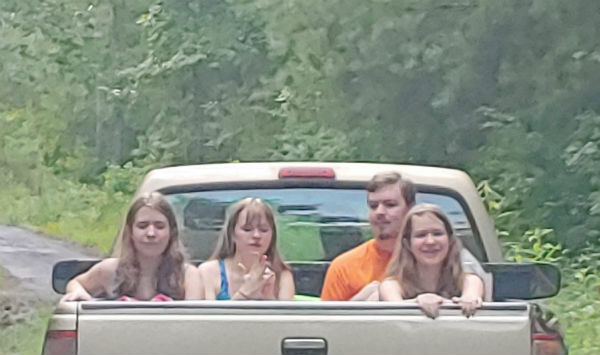 Saturday Evening in the Cabin

Before long, it was time to start preparing food for dinner. The ladies took over the kitchen while my husband and kids introduced our host to Settlers of Catan.

He took a break to grill the meat after their first game but quickly settled in for another round or two later that evening. 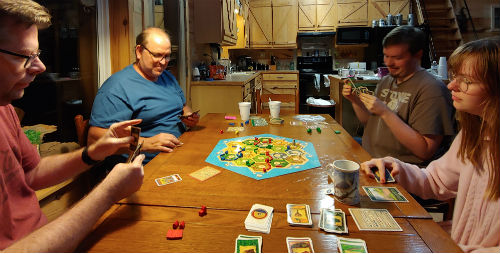 Although my husband and I had contemplated an early departure, we decided to not to rush home. Grammy was delighted that I could join her for another 3-mile jaunt through the mountains. When we stepped out of the cabin, it was foggy and sounded like it was raining. In reality, water from earlier rain was dripping from the trees. Sounds from the stream accentuated the effect.

Heading in the opposite direction of Saturday’s walk, the road was hilly, but not too strenuous—at least for the first mile. But what should we expect in the mountains? Eventually, we had to decide whether to traverse another never-ending hill or turn back. Determined to press on, we marched forward. When we had nearly reached the top, my phone began dinging. We had discovered cell service in the mountains after all!

I paused to download my email and reply to a friend’s text message before we began our descent. Halfway down, another snail crossed our path.

Near the end of the walk, my calves became noticeably sore, though my knees were fine. I was glad when the cabin once again came into sight.

While breakfasting on Saturday’s leftovers, we gathered for a final round of Settlers of Catan. It may be our host’s new favorite game.

Even without a cell signal, the demands of civilization were calling us home. Reluctantly, we sent the kids to pack up their things and began loading the car to head home. 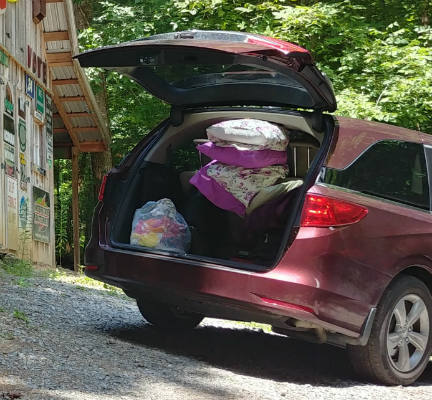 I paused to admire my girls’ paintings, which we left there to finish drying. Although they had begun as a collaborative effort, my high school daughter was responsible for the finished products. 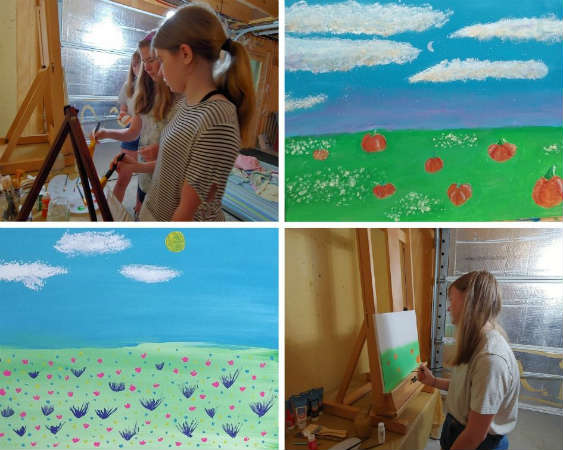 At the last minute, the twins discovered the cabin’s rock and shark tooth collection. Grammy sprang into science teacher mode and joined the girls as they attempted to identify the various rocks and minerals. 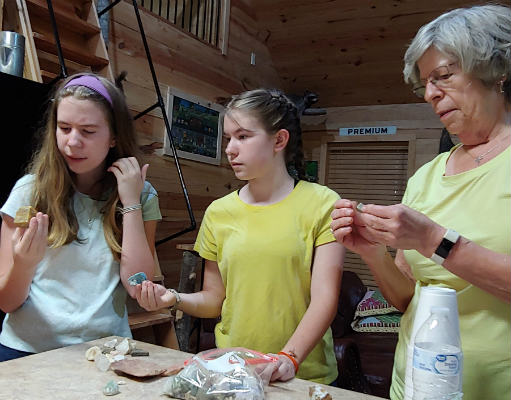 Shortly past noon, we pulled out of the steep gravel driveway and headed home. But our adventure wasn’t quite over. While driving past a lake, we stopped to rescue a turtle that was crossing the road. 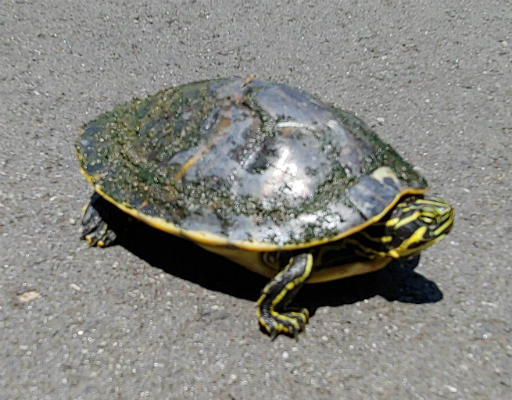 Recounting our time in the mountains makes it seem so short and simple. While we were there, however, time passed at such a relaxed pace that it almost seemed we’d been away for a week. The peaceful weekend was just what we all needed before greeting a crazy and hectic week.

Has your family taken time out for a summer adventure? Share what you did in the comments.