Disclaimer: I received a FREE copy of this product through the HOMESCHOOL REVIEW CREW in exchange for my honest review. I was not required to write a positive review nor was I compensated in any other way.

What do you know about Captain John Smith? Before my 14-year-old daughters read Heroes of History—Captain John Smith: A Foothold in the New World, they knew him only as the English explorer who helped settle Jamestown and was saved from execution by Pocahantas. YWAM Publishing’s biography of Captain Smith reveals much more about his life and influence. The corresponding Unit Study helped add to our understanding. 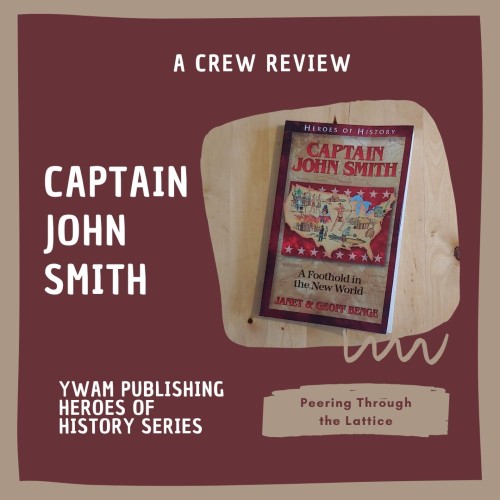 Rather than commencing with Captain Smith’s expedition to settle Jamestown, the book begins with John’s childhood. Longing for a life of adventure, John abandoned the prospect of becoming a farmer to pursue a soldier’s life. His experiences took him all over Europe, where he developed the skills that he would need when he traveled to America.

This background information was my older twin’s favorite part of the book since it was all new to her. 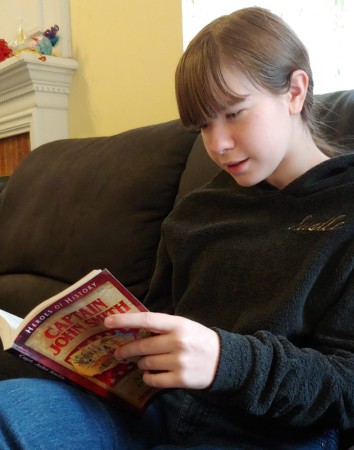 ”When he was venturing in Europe, that was really cool. I didn’t know about that part at all. He went all over Europe, made a difference, and then went to America. He’s a pretty amazing guy, and it’s fun to read about him. It’s a very adventurous and exciting story. ”

I loved how the historical context dovetailed with our ongoing survey of world history. John rubbed shoulders with other historical figures we had met briefly in our studies: Sir Francis Drake, Henry Hudson, and Sir Walter Raleigh. During a time rife with religious conflict, John had to decide who to fight for. It was interesting for the girls to put themselves in John’s shoes and think about what they would have done in his situation.

As the girls read on, they journeyed with Captain Smith across the Atlantic to settle Jamestown. John’s encounter with the Native Americans set the stage for my younger twin’s favorite part: “When Pocahontas saved him.” Appreciating the bigger picture the book presents, she adds:

”It was very exciting, and John Smith accomplished so many monumental things that it seemed like fiction.” 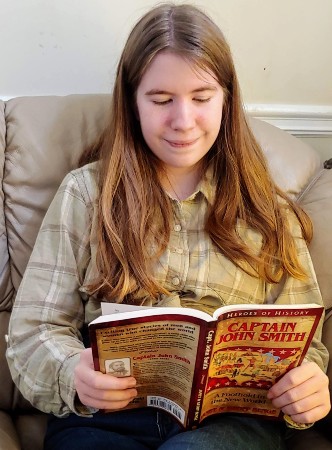 What did the girls gain from reading Captain John Smith: A Foothold in the New World? A better understanding of history. My older twin acknowledges, “I wouldn’t have known about how influential John Smith was without the book; it summed up his life nicely.” The younger agrees. From the book, she gained “knowledge about that time of history in America” and “details about the first permanent English colony in America.”

Before this review, we had never read from YWAM’s Heroes of History Series. Although I was initially uncertain how valuable the biography would be for the girls, I am glad we included it. Because they read the book, they can understand the historical context of the Jamestown colony. They have essentially experienced it through the eyes of Captain John Smith. 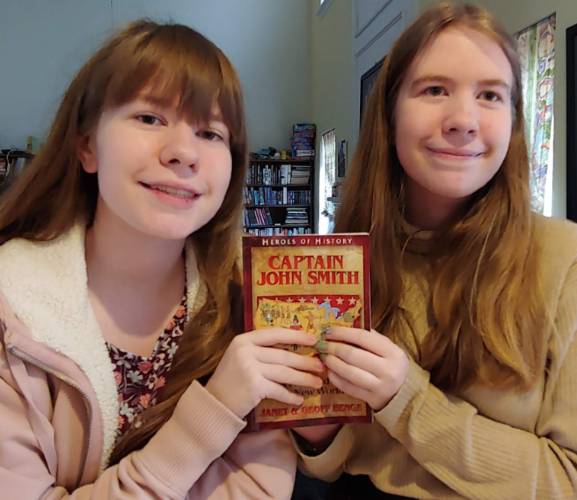 “We learned more of the background for everything. The book also told us more about what Captain Smith helped accomplish.”

In addition to receiving a softcover edition of Captain Smith’s biography, we also downloaded a corresponding Unit Study. 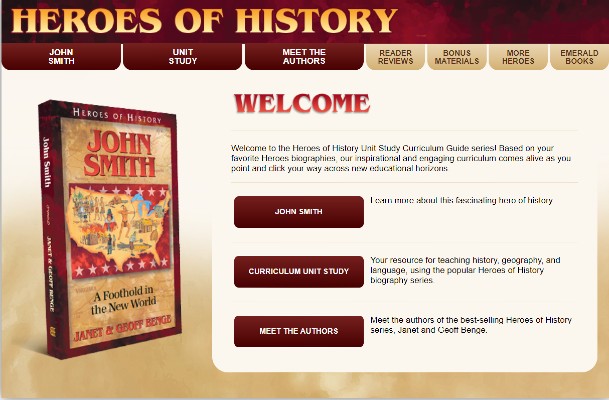 Glancing through the Unit Study materials, it was clear that I could have built an entire month-long curriculum around the book. For English, there are Key Quotes to copy and discuss. 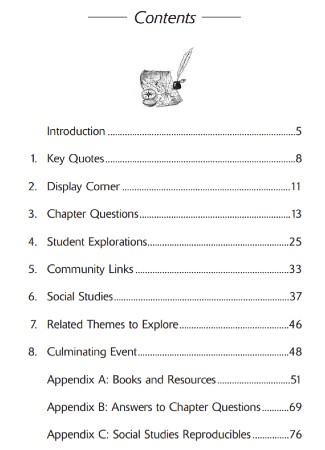 For students who appreciate hands-on activities and materials, there are suggestions for creating a Display Corner with materials related to the life of John Smith.

Since we included Smith’s biography as a supplement to our history curriculum, we used Chapter Questions from the Unit Study to discuss each chapter as the girls read. We utilize this same question and answer approach for much of their education, so I was thankful that the Unit Study provided questions. An Answer Key is available in the Appendix. It came in handy when the girls read faster than I did. 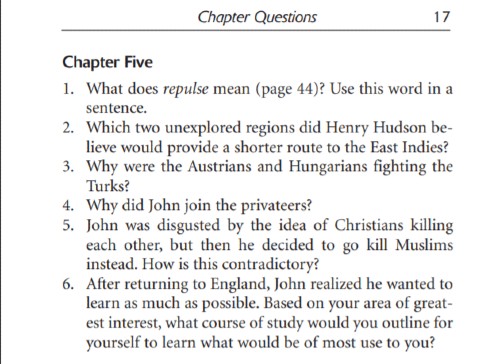 The Unit Study offers several suggestions for Social Studies. In addition to labeling places from Captain Smith’s life on a map, students extend their knowledge by contemplating conceptual questions. Ordered according to the degree of difficulty, these questions progress from simple (identifying various bays in the US and comparing their size) to analytical (researching and comparing slavery in the Ottoman Empire and in the US).

Ideas for incorporating subject areas like Math, Science, and Literature are offered on a handy chart of Related Themes to Explore. 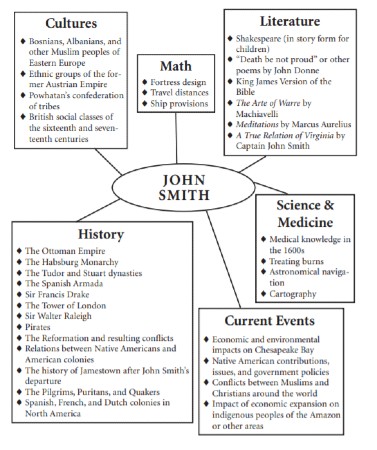 As with any Unit Study, parents should read through the study guide and select a few activities that would enhance their child’s education. Trying to do everything is like trying to eat every item on a buffet. Think of a Unit Study as a menu, and order wisely.

In the past, I’ve always gravitated towards YWAM Publishing’s Christian Heroes: Then and Now Series. Each book highlights an influential Christian—usually a missionary. We’ve read several: Jacob DeShazer (read our previous review), Mary Slessor, David Livingstone, William Carey. I’m glad we opted to read from the Heroes of History Series this time. The book helped us get to know a historical figure far better than any textbook can explain.

As we wrapped up our study of Captain John Smith, the girls were already daydreaming about reading more books from YWAM’s Heroes of History Series. My 16-year-old daughter recently posed a question to her sisters: “What’s your ideal curriculum?” Without hesitation, one of the twins selected the YWAM biographies.

Given her enthusiasm, I purchased another Heroes of History title—William Penn: Liberty and Justice for All. Having begun reading the book together, we better understand life in England during the mid-1600s, when Penn was a boy. It is the perfect supplement to our continuing survey of world history. I look forward to finishing Penn’s biography and reading others in the series.

For this Crew Review, we could select a YWAM Publishing book from either the Christian Heroes Then and Now or the Heroes of History Series. Other reviewers chose different books. Visit the Homeschool Review Crew Blog to read their reviews.