We had been in Taiwan for about a week when we stopped for a closer look at a food stall we’d passed several times. The pastries cooking on the specialized griddle resembled hockey pucks. Correctly surmising that we didn’t speak Chinese, a worker handed us an English menu.

Officially called Car Wheel Cakes, the delicious pastries could be filled with red bean paste, custard, sesame paste, taro, or even loaded baked potato filling. With so many options, which ones would we choose? 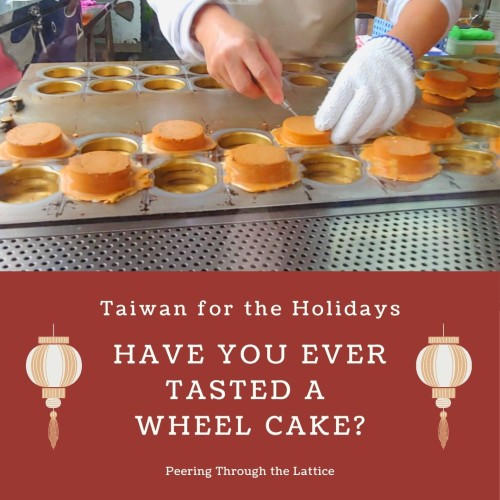 The twins requested sesame paste with custard. My older daughter chose taro. My husband’s mouth started watering as soon as he noticed loaded baked potato filling, so of course, he had to try it. After placing our order, we watched as our food was prepared.

The “pastry chef” was finishing up a previous order but had already poured the top shells for ours. We watched as she seasoned several of the disc-shaped molds on the cooking surface. After pouring some batter across the remaining slots, she used a brush to spread it evenly in each one.

Next, she scooped sesame paste into the first four shells and mashed taro into the next three. Two slices of cheese preceded a scoop of mashed potatoes into the pastry at the far end.

After scooping custard into the remaining four shells, she dolloped some atop the sesame filling for the twins.

Since all of the shells were filled, she began sealing the wheel cakes. Adding a bit of batter around the edges of the filled shells, she lifted each empty top crust from the cooking surface and flipped it onto the base.

We watched as she used a utensil that resembled an icepick to release each piece from the pan and finish assembling the wheel cakes.

Since several of them weren’t fully sealed, she added extra batter around the edges while they finished cooking. With our order nearly complete, she began preparing the other side of the cooktop for the next batch of wheel cakes.

Her assistant placed each completed cake into a small paper bag and labeled it so we would know what filling it contained. Then she placed our entire order in a plastic bag and handed it to us.

A ten-minute walk later, we were home in our kitchen, ready to taste this Taiwanese treat. The twins bit into their sesame-custard filled wheel cakes. A chorus of “Mmmm…” immediately erupted. The verdict: “This is real good!”

Next, my husband bit into his loaded baked potato wheel cake. He described it as “mashed potatoes with a little bit of cheese, kind of like mushy hashbrowns.”

My older daughter tasted her taro wheel cake amidst a discussion of what taro is. The flavor of this purple root vegetable is almost like a combination of sweet potato and regular potato.

In the weeks that followed, the wheel cake stand became a favorite place to grab a hot snack. Sometimes, as we headed home, my husband would hand the girls some Taiwanese cash and send them off to buy wheel cakes. It was astonishing to see the three develop such independence in a foreign culture. They soon became experts at ordering and eating this tasty Taiwanese treat.

Did this post whet your appetite to learn more about Taiwanese food? For more of our foodie adventures in Taiwan, check out these related posts: Have You Ever Tasted Bell Fruit? and What Can You Eat at the Raohe Night Market?