Since Taiwan is located in a tropical climate, I looked forward to trying new varieties of fruit during our six-week visit. One of the Taiwanese friends we met at church on our first Sunday suggested several fruits we should look for at the store. What did they look like? Could we even find them?

My husband was thrilled to discover a pear-shaped fruit he remembered from his childhood years in Taiwan. He called it a wax apple or bell fruit. In other countries, it goes by numerous other names: java apple, wax gambuor, samarang rose apple, or makopa. 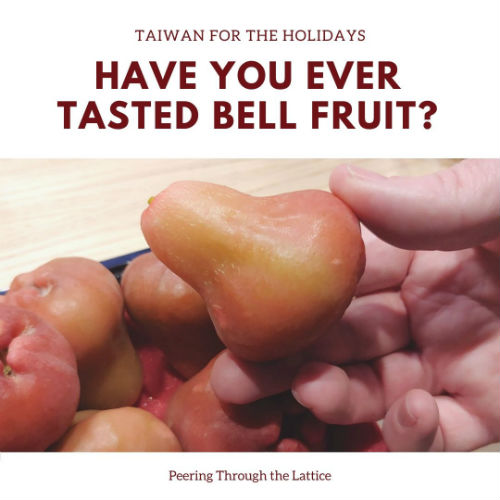 We found a shrink-wrapped package of bell fruit at the local grocery store. Assuring me that it was a tasty treat, my husband bought it, brought it home, and took off the plastic wrap. 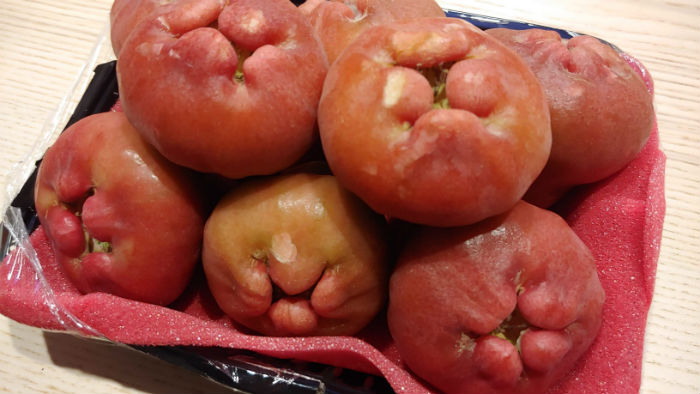 As with any new fruit, I was not quite sure what to do with it. My husband started preparing it.

First, he sliced it in half from top to bottom. Inside, we could see the seeds and core. There was a hollow area near the bottom of the fruit. Much of the flesh looked very similar to an apple or pear, but the outer edges had a slight green tinge.

My husband removed the core just as he would from a pear. He carved out the round section with seeds near the base as well as the skinny area just above it. 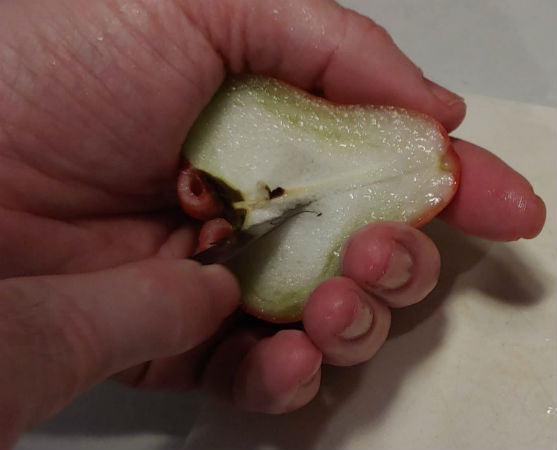 Finally, he cut off the hollow area at the bottom of the bell fruit. 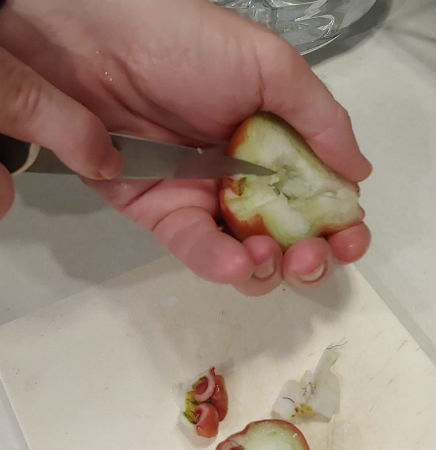 After handing half of it to me, he eagerly bit into the other piece and relished the sweet, juicy flavor.

Expecting it to be similar to a pear, I followed suit. Both the texture and taste of the fruit surprised me. It was crisper than a pear and juicier than an apple. The flavor was not quite as sweet as either of those more familiar fruit. It was reminiscent of apple combined with celery, as in a Waldorf salad. I quickly finished off the delicious fruit.

When the girls entered the room moments later, my husband prepared another bell fruit for them to sample. They eagerly bit into it, enjoyed the sweet taste, then attempted to identify the flavor. Was it more like celery, grass, chocolate, or star fruit?

During our six weeks in Taiwan, we tried several new fruits, but this was undoubtedly a favorite. We enjoyed it throughout our visit and miss it now that we are back in the US.