Our second day in Israel was even more amazing than the first. We enjoyed a surprise stop in the Golan Heights Tuesday morning. Afterwards, we drove another forty minutes to Banias.

Originally, the name of the site was Panias after the half-man, half-goat god Pan. The Greeks and Romans built temples next to the Grotto of Pan, which they considered to be the gates of hell. The city here was also known as Caesarea Philippi. 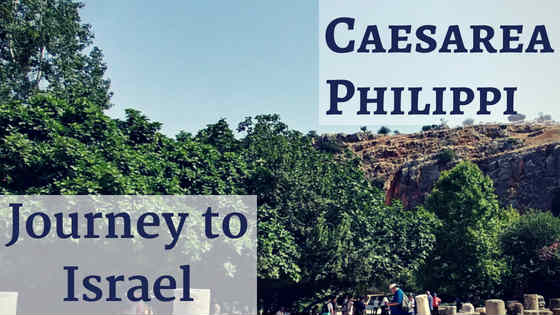 We exited the bus and gathered in the shade near a flowing stream. Our pastor read from Scripture an important event that happened here. 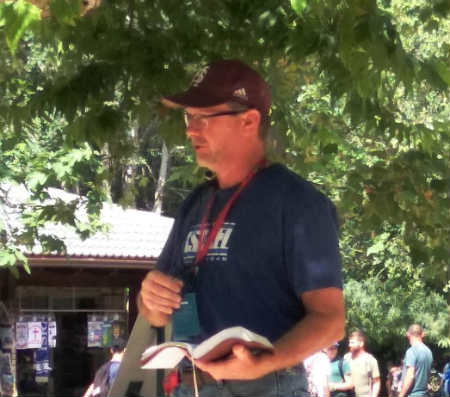 Now when Jesus came into the district of Caesarea Philippi, he asked his disciples, “Who do people say that the Son of Man is?”

And they said, “Some say John the Baptist, others say Elijah, and others Jeremiah or one of the prophets.”

Simon Peter replied, “You are the Christ, the Son of the living God.”

And Jesus answered him, “Blessed are you, Simon Bar-Jonah! For flesh and blood has not revealed this to you, but my Father who is in heaven. And I tell you, you are Peter [petros], and on this rock [petra] I will build my church, and the gates of hell shall not prevail against it. I will give you the keys of the kingdom of heaven, and whatever you bind on earth shall be bound in heaven, and whatever you loose on earth shall be loosed in heaven.”

Then he strictly charged the disciples to tell no one that he was the Christ.
Matthew 16:13-20

Our pastor pointed out that this event likely happened by the stream or the pool of water, which are fed by a spring. Jesus and his disciples would certainly not have ventured into the cave or the pagan temples. For Jews these were considered unclean. 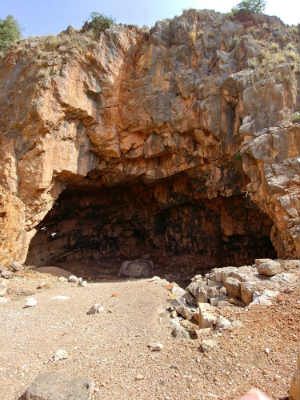 In Matthew 16:18, Jesus calls Peter petros, meaning “little stone” or “pebble” which can easily be picked up. Looking into the water, we spotted many such pebbles! 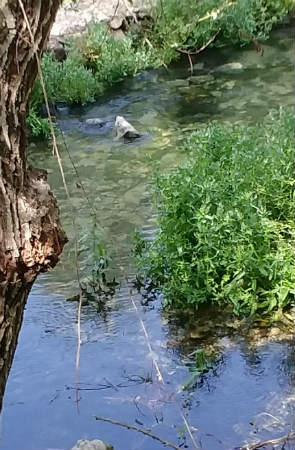 Next, Jesus says He will build his church on this petra. This distinct Greek word indicates a large stone, boulder or cliff which juts up out of the ground. The immovable truth of Jesus’ divinity is the foundation of our faith and of the church. 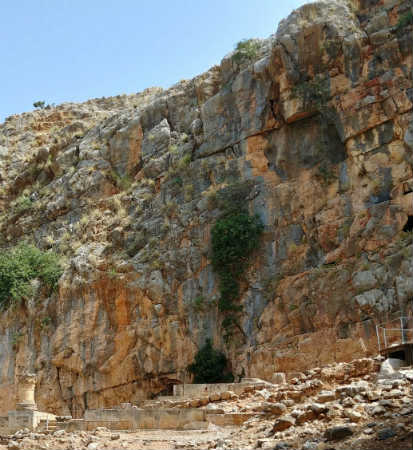 As our pastor spoke, he clarified that Jesus’ reference to the gates of hell is a “double entendre.” Gentiles considered the cave of Pan to be the entrance to the underworld.

The Jews believed Mount Hermon to be the gates of hell. Did Jesus point in the direction of that nearby mountain as he spoke?

Nothing can not hold back the church’s message of the gospel—not even the gates of Hell. The truth of the Word blows away every obstacle.

After understanding the biblical context of Banias, we meandered to the cave entrance.

For hundreds of years, people sacrificed animals to Pan. The Greeks and Romans threw an animal into the deep pool of water inside the cave. If the animal disappeared without a trace, the sacrifice was accepted. If it floated to the surface, however, they had to sacrifice another animal. 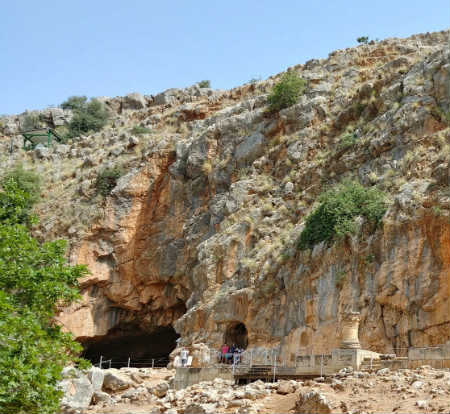 To the right of the cave entrance, we encountered the ruins of the pagan temples. Herod himself built one in honor of Caesar Augustus. 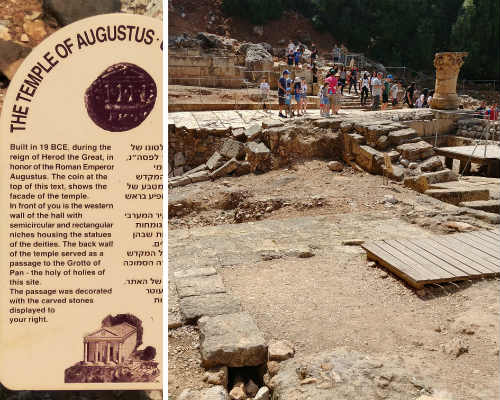 Initially, it astonished me that a “Jewish king” would build a temple to a false god. Of course, this is the same murderous king who killed anyone who might be a threat to his authority. No one was safe from his paranoid vengeance. He killed friends, relatives, and even all the baby boys of Bethlehem around the time of Jesus’ birth. Considering the negative character Herod displayed, his pagan building projects should not surprise me.

As we walked, I noticed various niches carved into the rock. Mika explained that statues of pagan gods were once placed in them. 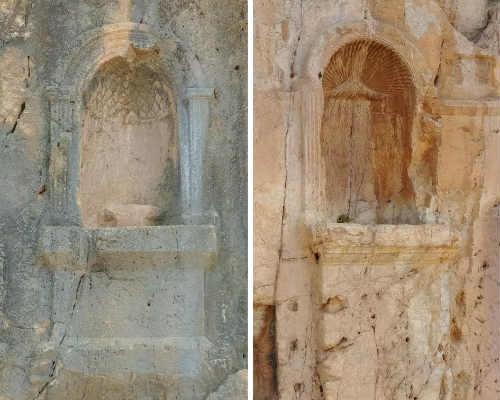 Continuing on, I paused to admire an elaborately decorated Corinthian column. 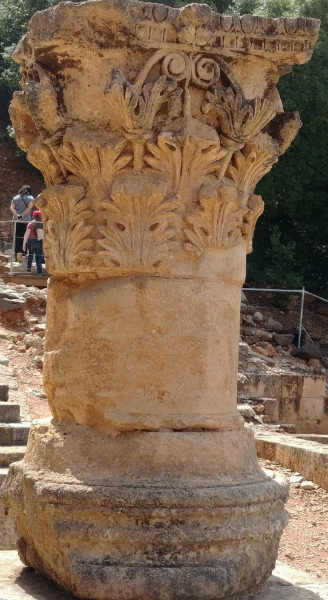 Under a low wooden roof, pieces of stucco from the temples were protected from weathering. 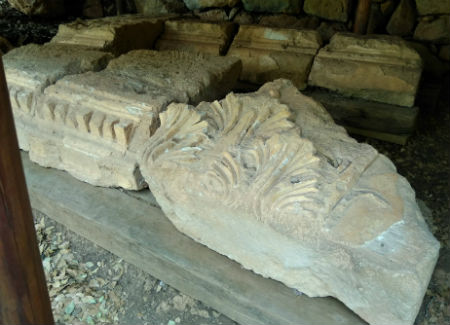 Nearby stonework was etched with Greek lettering. 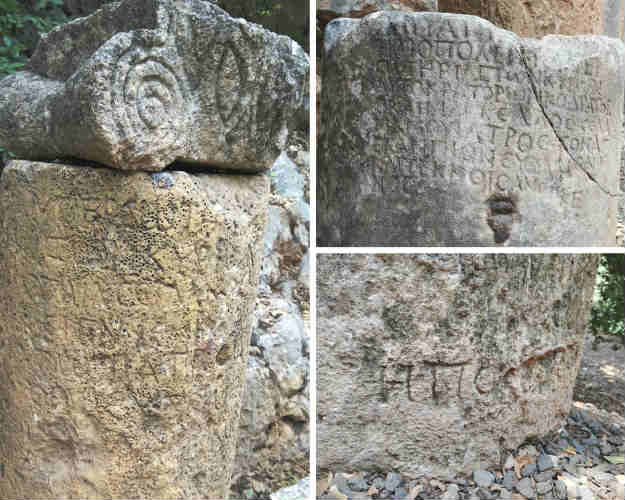 I really appreciated the natural beauty of Banias and wished we had time to explore it more. Someday I want to return, see the remains of the city that once existed here, and hike to the nearby waterfall.

On this trip to the Holy Land, we visited many sites but often did not have time to fully explore them. We sampled much of what Israel has to offer only to realize how much more there is to discover. Which site would you most like to visit?