It had been a long morning. We had already traveled through the Golan Heights to Banias and on to the Mount of the Beatitudes. Our energy level was low during the ten minute drive down the hill. A few minutes past noon, we arrived at Tabgha, the possible site of the feeding of the 5,000. A feast of fish and bread would have been welcome upon our arrival! 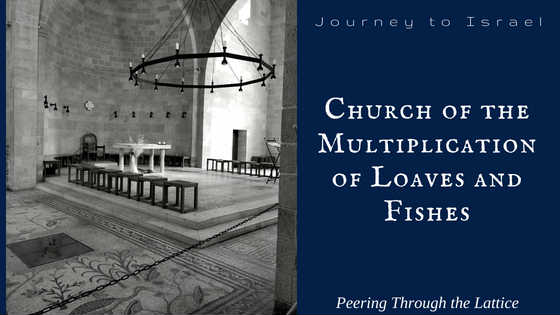 Kobi parked our bus expertly in the long line of tour buses which had already arrived. From the parking lot, Mika led us to the Church of the Multiplication of the Loaves and Fishes. We paused in the courtyard while Mika recounted the church’s history. 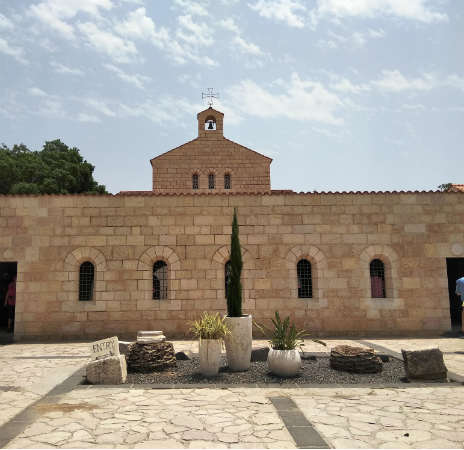 It all started with a special rock. According to tradition, Jesus placed the loaves and fishes atop it. After he blessed the food, the disciples distributed the meager rations to the 5,000. When everyone was full, they collected twelve baskets of leftovers.

For three centuries, Christians considered the historic rock holy. In 350 AD, a Jewish nobleman named Josipos built a church on this site. At its center, the rock served as the altar.

More than 100 years later, a Byzantine church was built here. The rock was moved and placed under the altar. Then, in 614 AD, the Persians destroyed the church. For centuries, there was no Christian activity in the region. 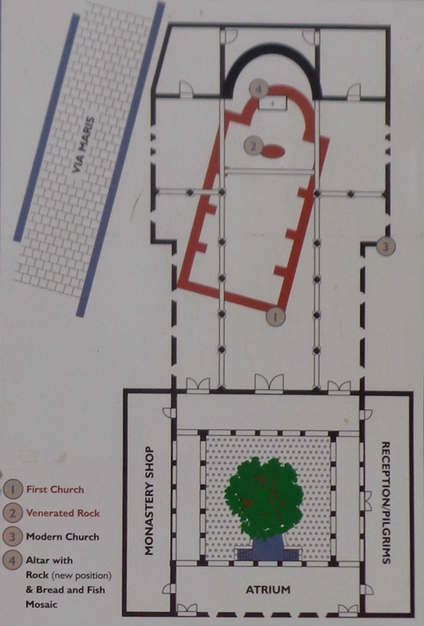 It was time to escape the heat and explore the church ourselves. On the way in, we paused to check out the fish in a small pond by the entrance. 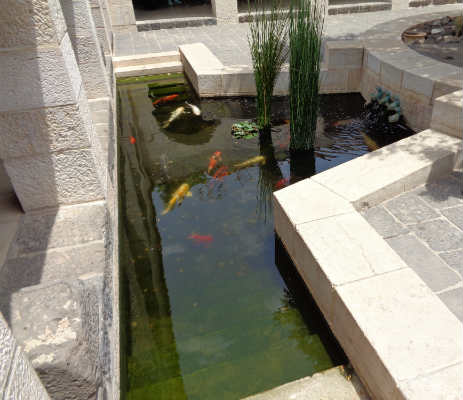 Passing through a covered colonnade, we entered the church. Windows below the vaulted ceiling allow plenty of natural light to enter. 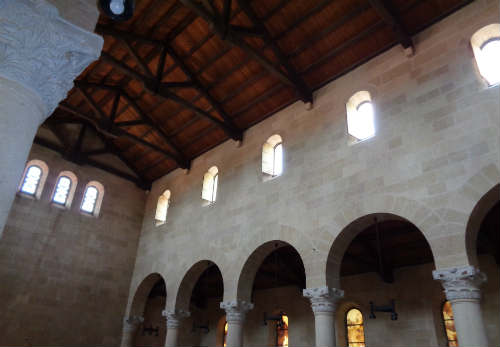 Under the altar at the front of the church is the historic rock. Loaves and fishes are depicted in the mosaic floor immediately in front of the altar. 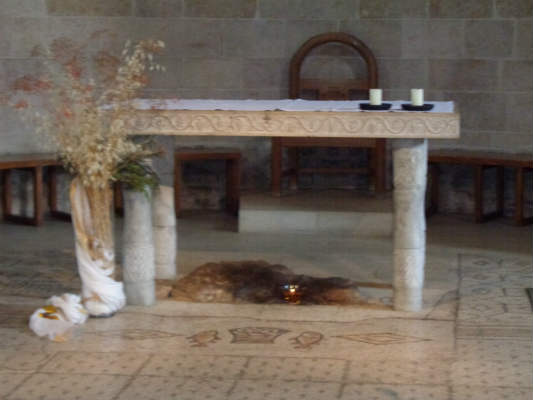 Progressing to the left of the altar, we admired the fifth century mosaic floor. We were amazed at the variety of birds and plants represented. 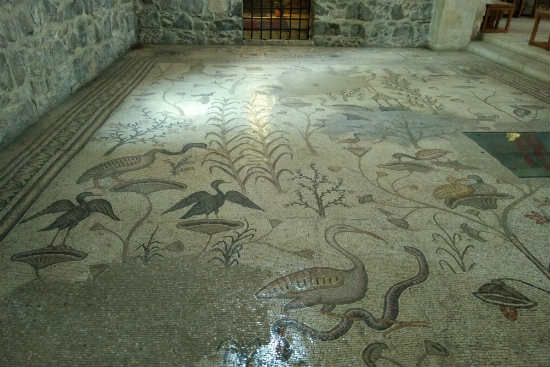 On the way back to the bus, I paused to read a sign giving more details about the location. The Bible refers to Tabgha as Magadan and Dalmanutha. 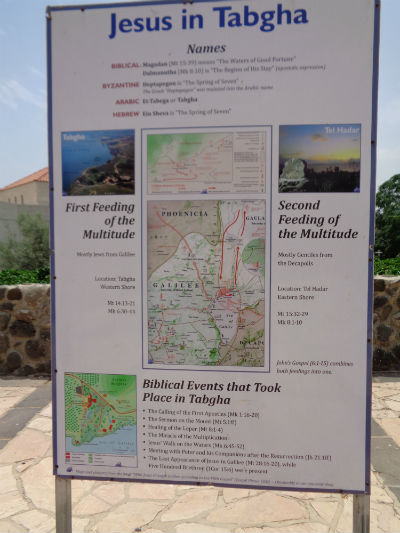 The name Tabgha is actually from the Greek word Heptopegon. It refers to seven springs flowing into the Sea of Galilee here. The warm water they provide makes it a perfect breeding ground for fish. It is easy to understand why fishermen Peter, Andrew, James and John were working in the harbor here when Jesus called them (Mark 1:16-20).

Just up the hill, Jesus taught the sermon on the Mount (Matthew 5-7). On his way down to the harbor, he healed a leprous man (Matthew 8:1-4).

Jesus blessed the five loaves and two fishes to feed thousands of people here. Afterwards, he walked on the water in the midst of a windstorm on the Sea of Galilee (Matthew 14:13-33).

Following His resurrection, Jesus met the disciples here on the shore of the lake. He cooked fish for them over an open fire and specifically encouraged Peter (John 21). Later, Jesus likely spoke the Great Commission at this location (Matthew 28:16-20).

Looking back at our time in Tabgha, I am awed by the historic ground on which I stood. It would have been awesome to see the ancient harbor that recent drought has made more evident. However, I was glad this particular visit was short since we were all tired and ready for lunch.

Which feature of Tabgha is most striking to you? Please share in the comments below.