Our trip to Israel provided opportunities to experience four significant bodies of water—the Mediterranean Sea, the Sea of Galilee, the Jordan River, and the Dead Sea. On Sunday evening in Tel Aviv, we experienced the chilly Mediterranean. Two days later, we dipped our fingers in the Sea of Galilee then took a memorable boat ride there. As Wednesday dawned, my husband and I anticipated wading in the Jordan River. 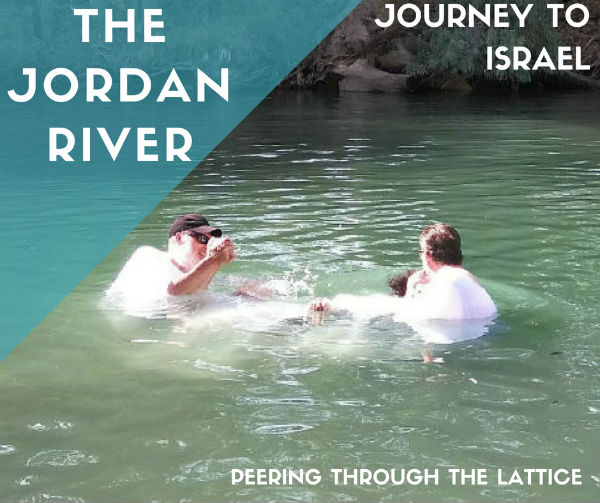 We enjoyed a final breakfast at the Ramot Resort. Then we checked out of the beautiful chalet that had served as our temporary home. We would miss this luxurious tropical retreat.

Joining our group aboard the bus, we headed south along the eastern coast of the Sea of Galilee. Half an hour later, we arrived at the Yardenit Baptismal Site at the head of the Jordan River. 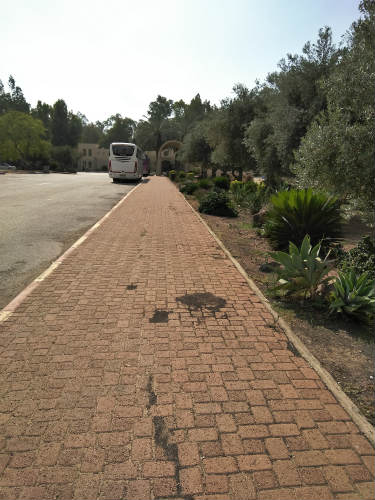 Almost a quarter of our group chose to be baptized (or re-baptized) here. What location could be more fitting? Jesus Himself was baptized in the Jordan before beginning His ministry.

People of many nationalities can read Mark’s account of Jesus’ baptism on the way to the Jordan.

It came to pass in those days that Jesus came from Nazareth of Galilee, and was baptized by John in the Jordan. And immediately, coming up from the water, He saw the heavens parting and the Spirit descending upon Him like a dove. Then a voice came from heaven, “You are My beloved Son, in whom I am well pleased.” Mark 1:9-11

Both biblical and modern languages are well represented in tiled displays of this Scripture passage. I could make out some words in the Greek, Latin, Spanish, and German translations. Of course, I could read the English version as well. Many of the other languages (such as Chinese, Arabic, and Hebrew) looked like gibberish to me. But it was neat to imagine the believers from many nations who have been baptized here. 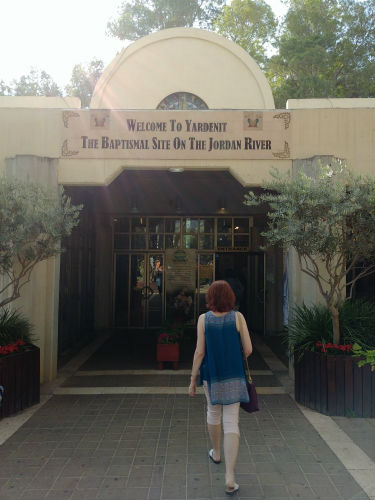 We walked into the main building on the site. Inside, those wishing to be baptized paid a fee and received white robes. While they prepared for the baptism, we looked through the gift shop. My husband bought a pair of much-needed sunglasses.

Headed out the back door of the building, we found the baptismal area. Several shelters accommodate group baptisms with steps right down into the Jordan. 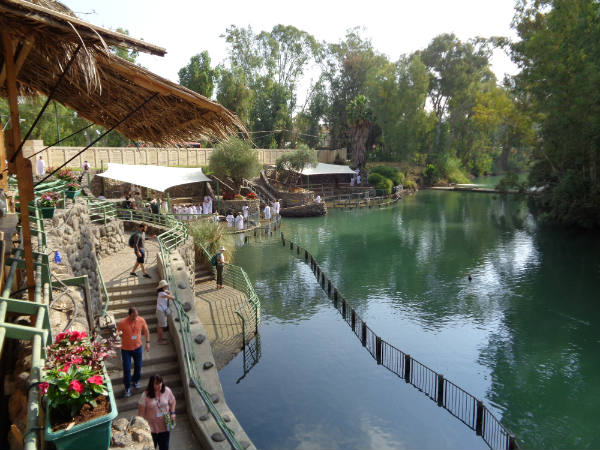 My husband and I were anxious to check out the river. We descended the first set of steps we came to. 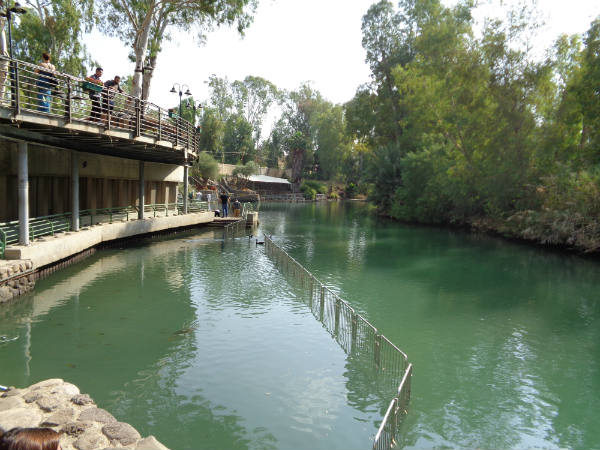 We watched as several ducks floated by.

Then we looked down into the water and observed the fish. 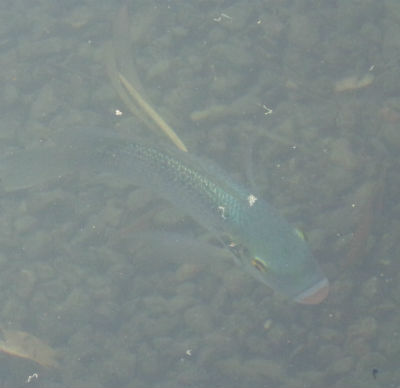 Even though I was not getting baptized, I was prepared to wade in the river a bit. Capris and Crocs were perfect attire for our brief visit here. Initially, I left my footwear by a bench and took a few steps toward the river. The hard stony surface bothered my sensitive feet. A bit of water wouldn’t hurt my plastic shoes, so I put them on again before wading in.

Our white-robed friends joined us, lining up by the river. It was time for the baptism.

Our pastor was the first to enter the water. He gave instructions for how the baptism would proceed. Another pastor from our group walked out to assist, and the candidates waded in. 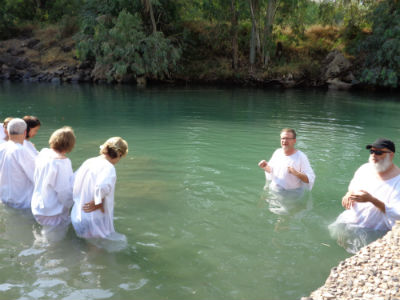 Most of the baptisms were simple. Each candidate in turn walked out and stood between the pastors. One pastor announced the person’s name. Together, both men baptized them.

A few unusual requests made the event more memorable.

One of the older ladies in the group was being baptized for the very first time, and she wanted to do it Naaman-style. Do you remember the story from the Old Testament? An Israeli girl had been taken to Syria as a slave. Her master, Naaman, had leprosy. The girl expressed her concern for Naaman: “If only you could go see the prophet in Israel. He could heal you of your leprosy!”

Naaman, who was a commander in the Syrian army, relayed the girls’ words to the king. With great concern for his officer, the king drafted a special letter and sent him to Israel. There, Naaman met the prophet, Elisha. Instead of healing Naaman on the spot, Elisha sent him to the Jordan River, saying, “Wash yourself in the Jordan seven times, and you will be healed.”

This idea went over like a lead balloon with Naaman. Why would he want to dirty himself in the muddy Jordan when there were far better rivers back home? He was ready to stalk back to Syria until one of his men spoke wise words:

“If he had asked you to perform a grand challenge to be healed, wouldn’t you have done it? Why won’t you do this simple task?”

His words convinced Naaman. They all went to the Jordan. Naaman trudged into the muddy river. He dunked himself into the water six times; nothing changed. But the seventh time he came up his skin was soft and smooth. The leprosy was gone! (2 Kings 5: 1-14)

As we all looked on, our friend was baptized—not once, not twice…but seven times in the Jordan river. 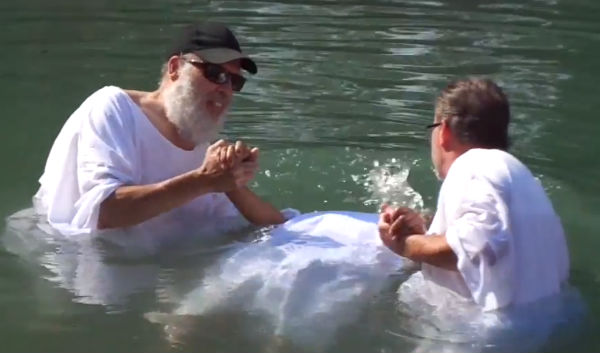 The gentleman who walked into the Jordan next carried his cell phone with him. Holding it high above the water to keep it safe and dry, he commemorated his own baptism with a selfie.

Another unusual baptism involved a married couple from our church. What was their request? To be baptized at the same time. They entered the Jordan side by side.

The pastors had been working together up until now. This request caught them off guard. Would they do it? 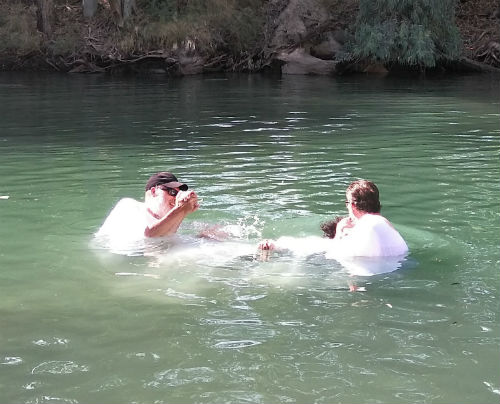 Our pastor announced their names. While he baptized the wife, the other pastor baptized the husband. The couple shared a special moment after coming up out of the water. I know they will always treasure this amazing experience.

With the baptisms complete, we had some time to relax while our friends showered off. We found a comfortable bench and chatted while we waited. Soon it was time to pass between the beautiful palm trees and return to the bus. 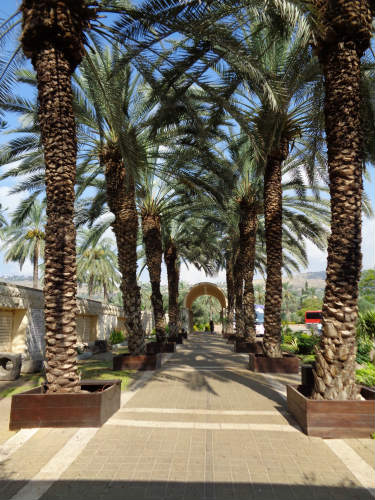 On the Road to Beth She’an

Heading south, we drove parallel to the Jordan for about half an hour on the way to our next stop. Along the way, we enjoyed the beautiful scenery. Fruit trees are closer to the road here than in other places. A screen covering protects the trees from the wind and offers a slight shade from the sun. These measures help reduce the amount of irrigation necessary. 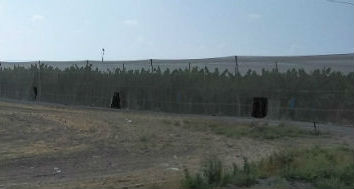 We passed flat farmland, where a farmer was busy baling hay. The Jordan River flows unseen between the field and the mountains in the distance. Those mountains lie in the country of Jordan.

Within thirty minutes we would arrive at the archaeological site of Beth She’an. For the moment, I was content to relax in air conditioning, gaze out the window, and listen to Mika’s explanations of the sites surrounding us.

Being baptized in the Jordan River was a bucket list item for some of the people on our tour. What is on your bucket list?

Next adventure on our trip: Beth She’an. Click here to journey along with me!