I love visiting my parents, siblings, nieces, and nephews in Maryland. For my kids, one of the highlights of our trips is visiting interesting places. While we were in Maryland last week, they went on an afternoon adventure with my husband. Their destination? The Catoctin Creek Park & Nature Center. 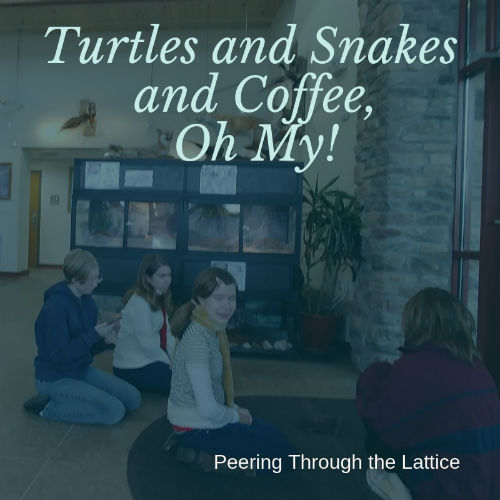 We had discovered it while geocaching on a cold winter day a few years ago. On a couple of occasions, the kids had played at the park. But they had never been inside the nature center.

Upon arriving, the kids raced to the playground. Within minutes, they were perched atop the large rocks in the play area. 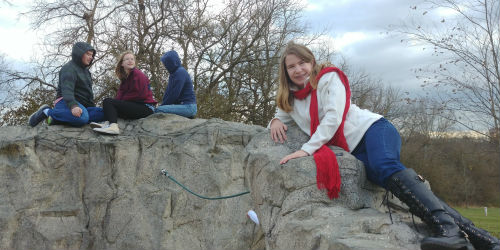 A nearby area of the park boasts musical features such as drums and chimes. My daughters loved it! 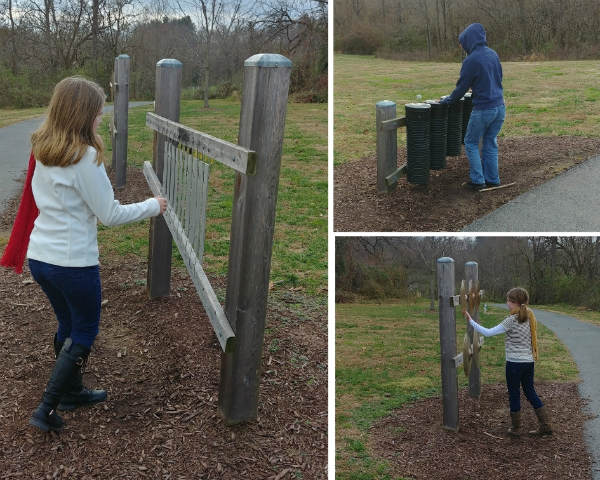 Curiosity soon drew them toward the building. Was it open on this Tuesday afternoon? Yes, it was! Inside, they observed snakes and turtles inside terrariums. 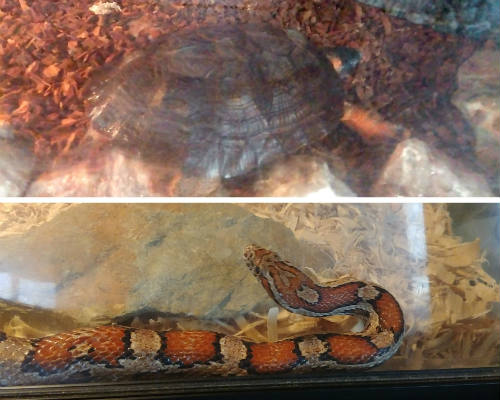 Wild animals had been stuffed and placed atop the cages. 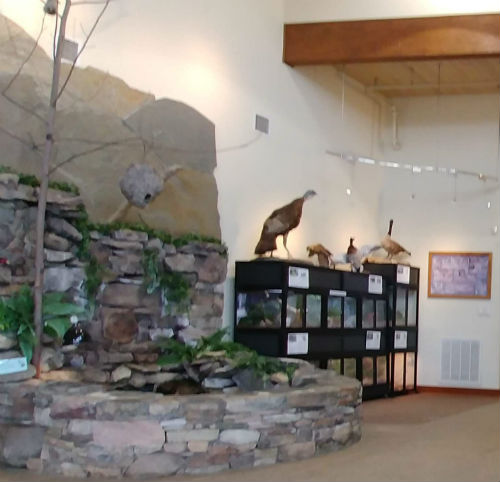 As other patrons left the nature center, the girls asked the lady in charge, “Can we touch the turtles in the pond?”

“No, they bite, but you can touch some of our land turtles,” she replied.

She pulled a wood turtle named Bark from behind the glass and placed it on a rug near the entrance. The girls gathered around and took turns petting the turtle’s shell. 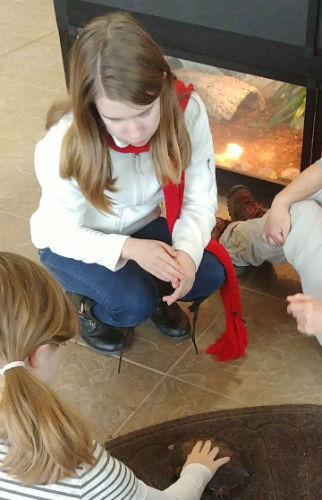 At first, the girls and the turtle were shy. But soon the girls were plying the “onsite expert” with questions. Likewise, the turtle eventually stretched its head out of the shell.

“If you drop a turtle on its back, will the shell break?” my fourteen-year-old wanted to know. The short answer is no, at least for a full-grown turtle.

“Can it feel you petting its shell?” inquired one of the twins. The shell material is similar to our fingernails. The turtle can certainly feel the pressure of someone touching its shell.

The real fun began when the staff lady began pulling snakes out. First, she introduced the girls to a corn snake named Sweetheart. They gathered around and petted the snake, comparing its skin to leather and bubble wrap.

The girls continued warming up to these cold-blooded creatures. Next, they took turns holding a rat snake named Ember. For its size, it was surprisingly heavy. 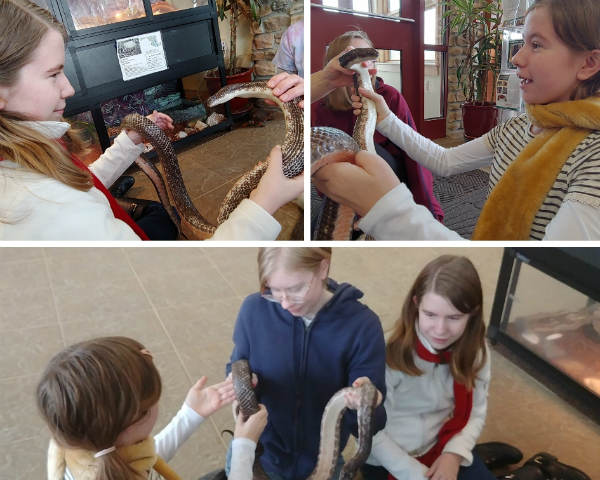 Was my son interested in petting or holding the snake? No, thank you! He was content to watch his sisters interact with it. 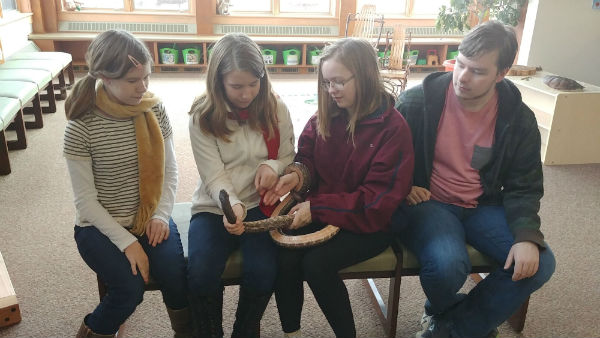 The kids enjoyed watching Ember try to form letters on the stone wall.

Interacting with the turtle and snakes was such a treat! As they were leaving, my husband observed a full activity schedule of programs offered by the Nature Center. Many of the events are designed specifically for homeschoolers. If you live near Frederick County, MD, it is definitely worth checking out.

Beans in the Belfry

As snack time approached, the kids wanted another treat. They asked if they could go out for coffee somewhere. This was the perfect time to check out a cafe we had seen signs for—Beans in the Belfry.

My husband drove them across country roads to the nearby town of Brunswick. They parked on the street and continued on foot to an old church which had been converted into a coffee shop. 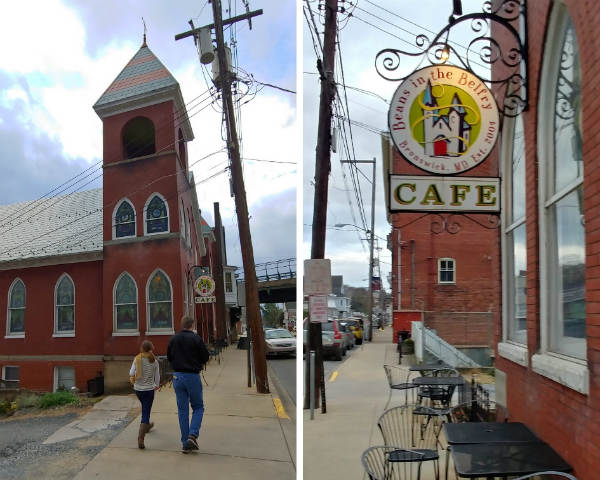 After ordering drinks, some of the kids climbed to the choir loft. 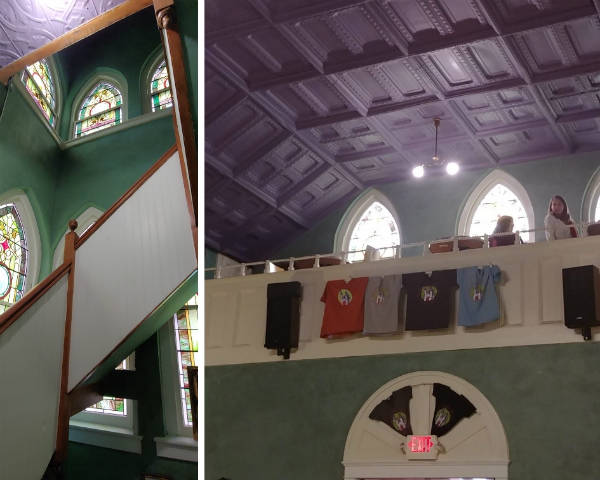 From there, they could see the entire cafe, which was already decorated for Christmas.

When the coffee was ready, they gathered around a table to enjoy iced lattes in various flavors—vanilla bean, caramel, ginger—even a root beer latte! 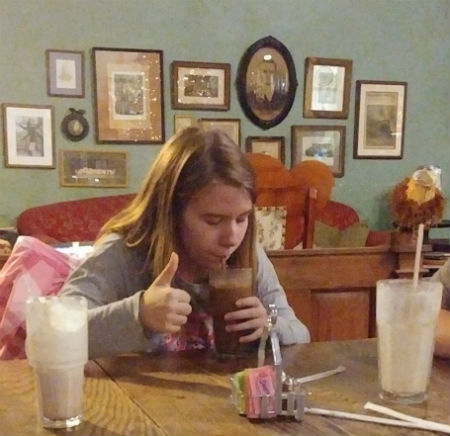 A few days later, they asked to go there again. They wanted to try java chip blended ice coffee, blended iced chai, and other delicious drinks. My husband was happy to take them. The kids enjoyed the unique atmosphere and delicious drinks at Beans in the Belfry.

Do you have a favorite nature center or a unique cafe you love? Tell me about it in the comments below.