It was hard to believe we had been in the city of Jerusalem for less than a day. Twenty-four hours earlier, we had been driving into the city. Since our arrival, we had seen many biblical sites.

One of the first places we visited in Jerusalem had been the Garden of Gethsemane. Now it was time to walk where the soldiers led Jesus after he was arrested in the Garden. We were on our way to Caiaphus’ house. 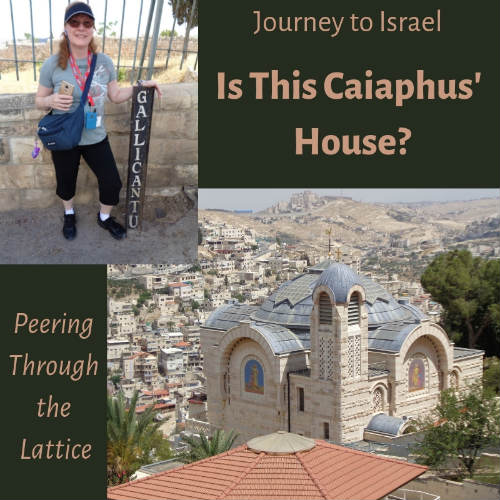 Leaving King David’s Tomb, we walked down the street and out of the city gate. At the top of a long hill, we found the entrance to St. Peter in Gallicantu, the church which commemorates Peter’s denial of Jesus. It stands at the possible location of the high priest Caiaphus’ house.

Was anyone too hot and tired to explore the church? Those who were waited on the cool bus. Although I was feeling rather worn out, I pressed on. We went to Israel to see as many places as we could. When would we ever have this opportunity again?

Before entering the church, we walked to an overlook adjacent to it. The Kidron Valley stretched before us.

Mika, our tour guide, pointed across the valley to the Garden of Gethsemane, where the soldiers arrested Jesus. From there, they led him across the Kidron Valley and up this hill to the high priest’s house. 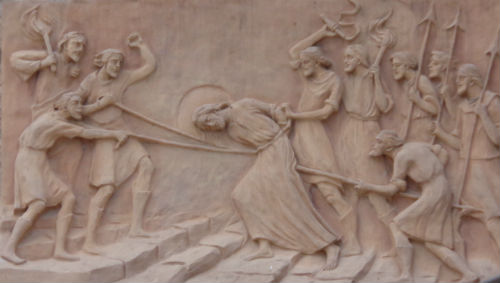 The Jewish leaders held a secret counsel at Caiaphus’ house to determine what to do with Jesus.

Peter followed the armed escort at a distance. Earlier that evening he had promised to follow Jesus even unto death. His boast was soon put to the test. After Peter entered the courtyard of the house, a female servant recognized him as one of Jesus’ disciples. He denied knowing Jesus—not once, not twice, but three times—just as Jesus had predicted he would. 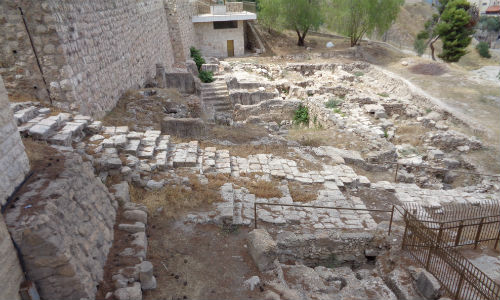 Once we understood the lay of the land, we headed into the church. 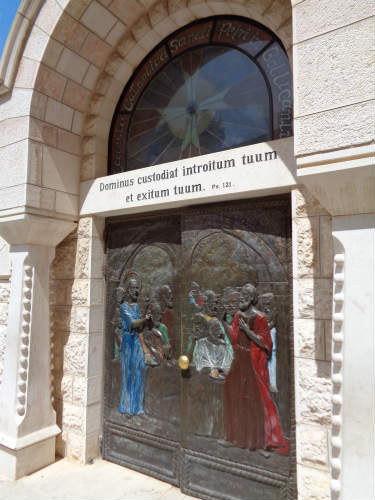 The upper level commemorates Peter’s denial. We entered the chapel and looked around. The colorful walls depicted scenes from the time of Jesus’ crucifixion. 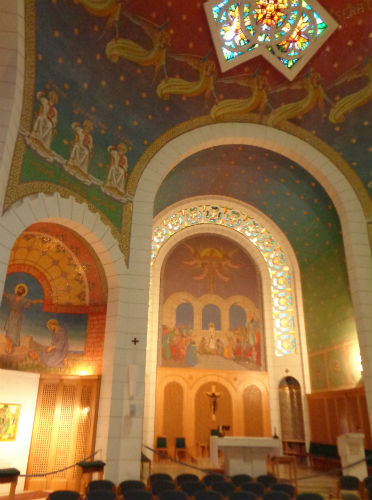 Next, we proceeded down a flight of stairs and entered another chapel. The middle level of the church focused on Jesus forgiving and reinstating Peter after the resurrection. 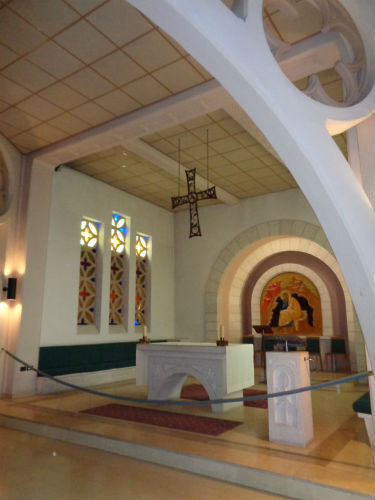 We continued down a final flight of stairs. 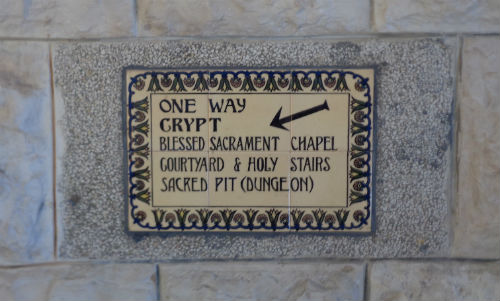 Part of the basement level had been a dungeon long ago. It had a cave-like ambiance. 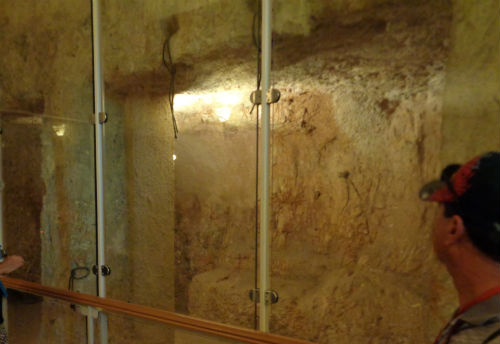 Could Jesus have been locked in this cell the night before the crucifixion?

In the chapel adjacent to the cave, a group of men was praying, singing, and reading Scripture in another language.

After briefly glancing inside the chapel, we exited through the back door of the church. The low wall under the portico was the perfect spot to rest. 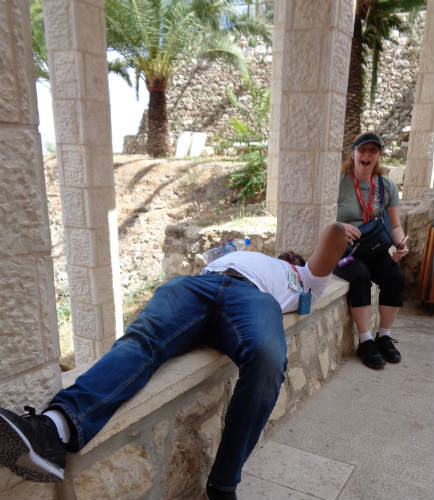 From our vantage point, we could see steps which led down into the valley. How amazing it would have been to walk that path, retracing the steps Jesus took the night before he suffered and died for our sins!

We had neither the time nor the energy for such a journey that day. Instead, we walked around the side of the church and climbed up a series of steps and ramps to reach the parking lot. On board the bus, we grabbed some fresh water bottles from a cooler and collapsed into the seats.

Because we had started our day early, it seemed much later than mid-afternoon. Since leaving the bus that morning, we had walked nearly four miles while visiting numerous historic sites.

Mika promised the next day’s pace would be much more leisurely. We would drive to the Knesset, the Israel Museum, and the Holocaust Museum in the morning. Later we would travel to Bethlehem and explore the birthplace of Jesus. I could hardly wait.

Have you followed our trip all the way through Jerusalem? On Wednesday we explored the Mount of Olives/Gethsemane and visited The Garden Tomb. On Thursday we visited the Western Wall, walked through the Western Wall Tunnel, saw the Pool of Bethesda and sang in St. Anne’s Church. Then we walked to the City of David, had lunch in the Jewish Quarter, and checked out the Upper Room and King David’s Tomb. Which one is your favorite?