We had enjoyed a delicious lunch in the Jewish Quarter of Jerusalem. After a bit of excitement in the plaza, it was time to move on to our next stop—the Upper Room. We would also visit King David’s Tomb. 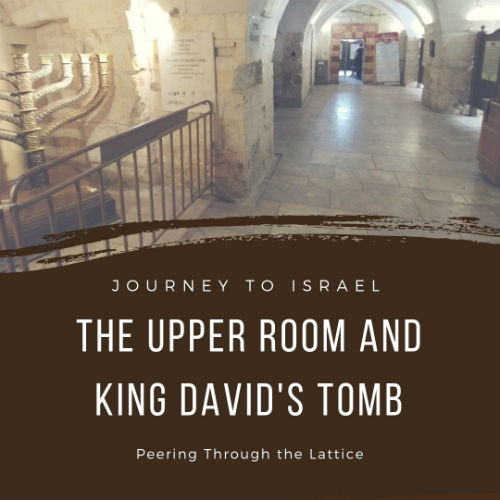 Though it was only a short walk to the Upper Room site, we quickly became hot and sweaty. The heat index on this final day of May rivaled that of a mid-summer afternoon in Georgia. 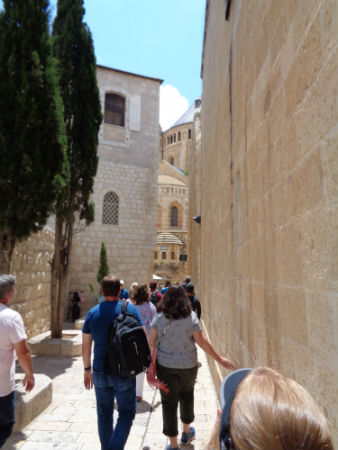 We followed our tour guide through the Zion Gate, which is riddled with bullet-holes from the Jewish war for independence. 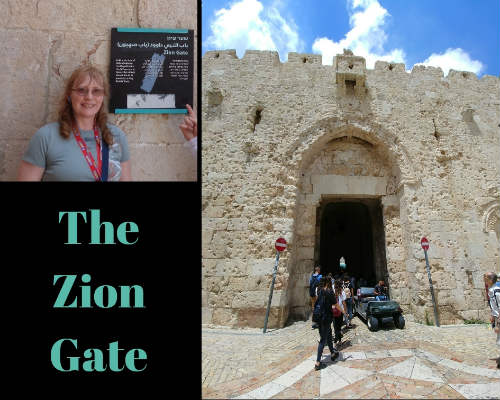 Soon we saw signs for the Upper Room and King David’s Tomb. 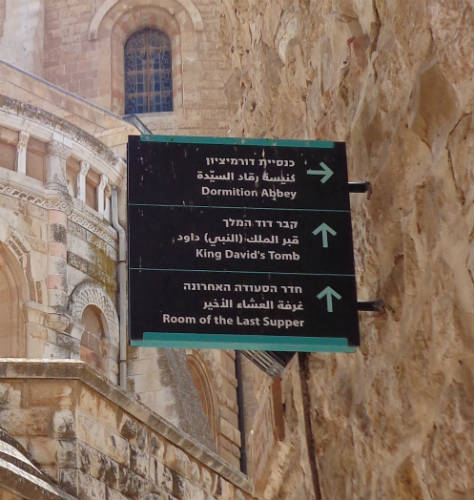 Turning to the right, we walked below a vaulted archway, thankful to be shaded from the hot sun. 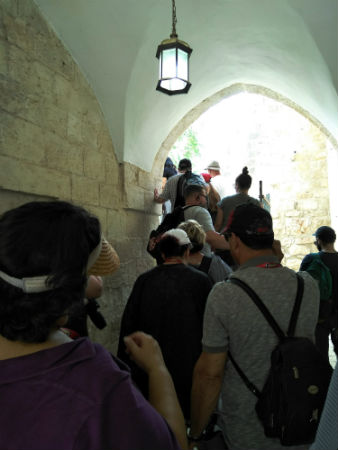 We ascended a short staircase and entered a large, open room. It was hard for me to imagine the Last Supper happening in a place like this. 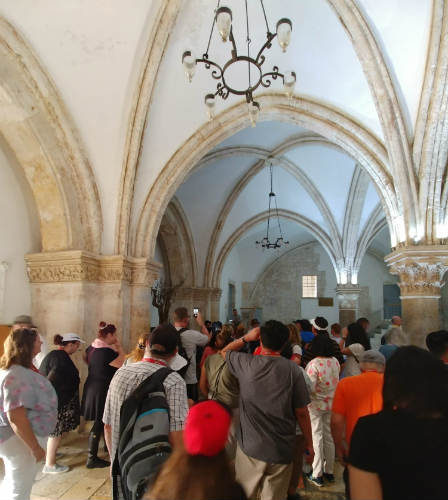 My eyes gravitated to a fig tree statue, which represented Israel. 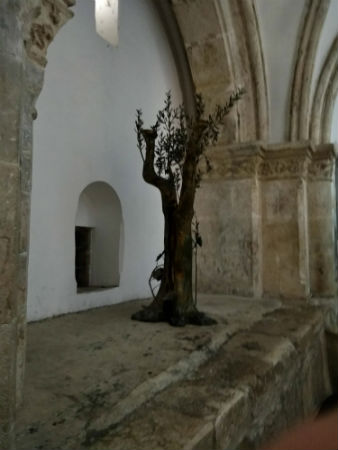 Directing us toward a corner of the room, Mika pointed out carved images of pelicans near the top of an archway. The image of baby birds pecking at their mother’s breast seemed out-of-place. However, this symbolism is a reminder of how Jesus shed His blood to give us life. 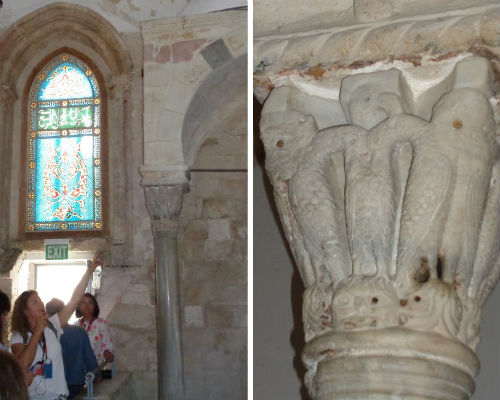 One section of the Upper Room was distinctly Arabic. Bright Ottoman-period stained glass windows captured our attention. Between them, a niche indicated the direction of Mecca. Next to one of the windows was a placard with flowing Arabic script. 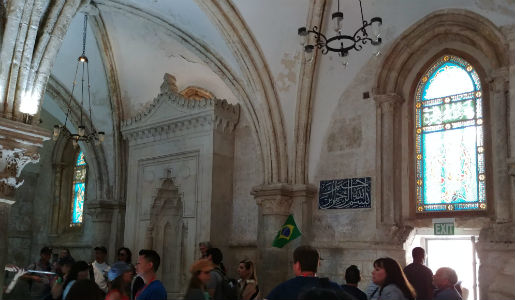 We exited down a second stairway and approached the entrance to King David’s Tomb.

Wait a minute….isn’t David buried in the City of David?

Then David slept with his fathers and was buried in the city of David. (1 Kings 2:10)

Nevertheless, this location beneath the Upper Room is revered as David’s Tomb. Jews, Muslims, and Christians consider it a holy site.

Men and women approach the tomb separately. My husband donned a yarmulke and entered the men’s side of the tomb. 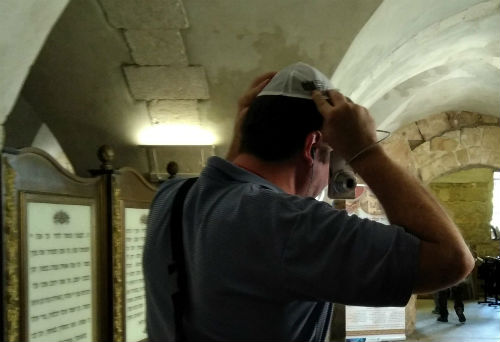 I walked through a beautiful stone entrance into the ladies’ section. 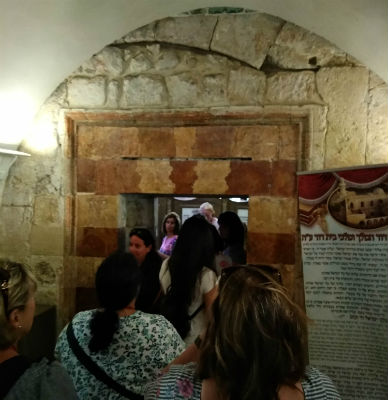 Inside, a beautiful cloth covered the tombstone, and a simple-looking lantern hung near one of the walls. Several women were praying. 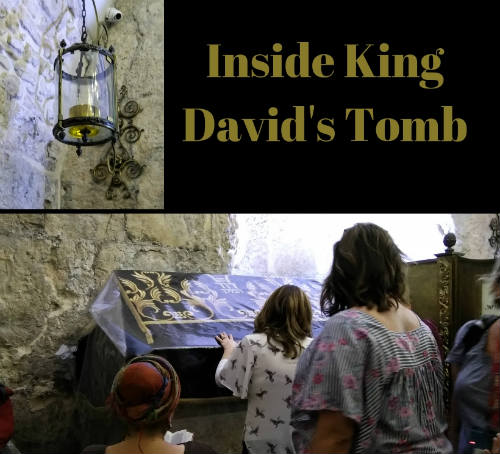 I quietly exited and joined my husband, whose experience on the men’s side had been similar to mine. 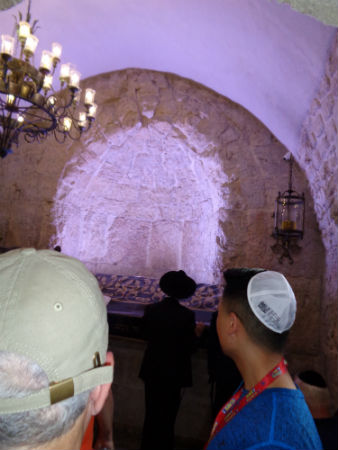 The Ramparts or Caiaphus’ House?

From here, the group from our church had planned to split off as we had earlier that morning. We wanted to walk the ramparts of Jerusalem. What an amazing experience that would be!

However, we had been exploring Jerusalem on foot since 7:30 that morning. The heat and humidity had sapped what energy the walking had not. Was it wise to risk overdoing it by walking atop the city walls during the hottest part of the day? We opted to stay with our tour guide.

Next, Mika would lead us to the church built on the site Caiaphus’ house. It was only a short walk from the Upper Room area.

Walking the ramparts around the old city of Jerusalem is definitely on the bucket list for our next trip to Israel. What’s on yours?