We began the long uphill trek from the City of David to Jerusalem’s Jewish Quarter. The hill seemed interminable. Were we even going the right way? 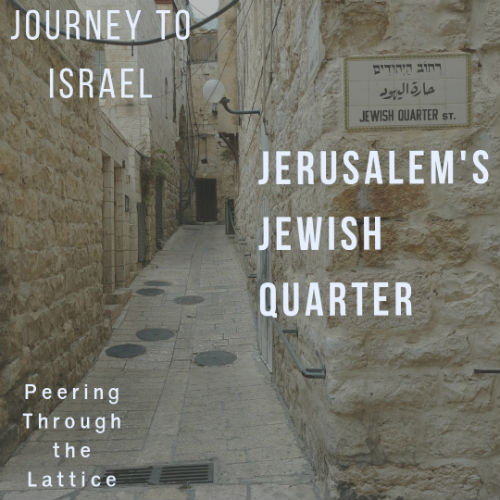 We asked a policeman, who directed us to continue up the hill and through the parking lot at the top. The Jewish Quarter would be to our right. 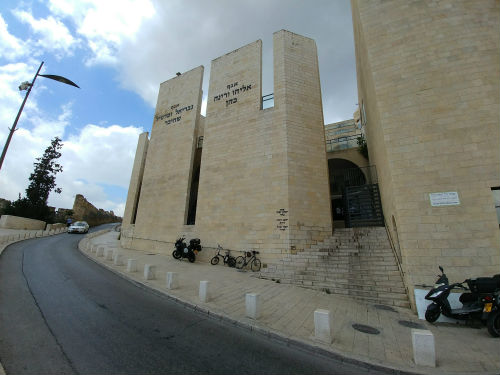 As we neared the top, we could hear music. Looking over the wall to our left, we saw people below with white and blue balloons. 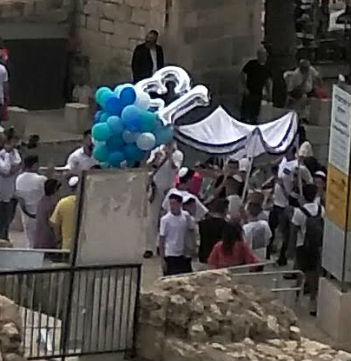 At first, I wondered what was going on. Then I remembered something Mika had mentioned earlier. Bar Mitzvahs are usually scheduled for Mondays or Thursdays. Since today was Thursday, it must a Bar Mitzvah celebration. We paused to watch a group parade past.

Then we continued our trek to the top of the hill. Across the parking lot, we spotted more groups celebrating Bar Mitzvahs. At the end of a row of cars, we turned right and inadvertently ended up leading the parade!

At last, we entered the Jewish Quarter. Leaving the parade behind us, we began searching for our tour guide and the other half of the group. We turned on our “whispers.” These light blue devices would transmit Mika’s voice to us over short-wave frequency if we were in range. When we heard her voice through the earbuds, we knew we were close. Where was she? 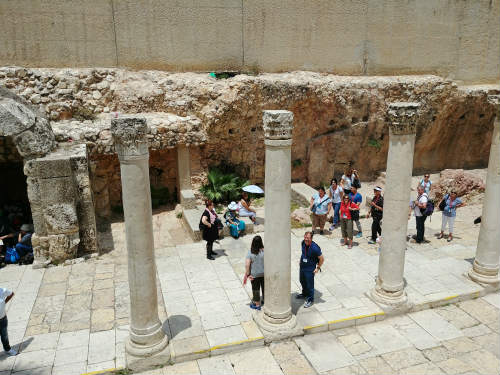 We found the group exploring the Cardo. It was off to our left, below street level. During the Byzantine era, the Cardo was the main thoroughfare and shopping center.

Although Mika had planned for us to shop nearby, we were tired and hungry. Food was our top priority. Mika described several restaurants in the area, giving directions to each one. Which should we choose? When she told us about her favorite restaurant, the decision was simple. We could just follow her.

We stood in line to order food, which was clearly displayed behind glass. My husband chose fish cakes. 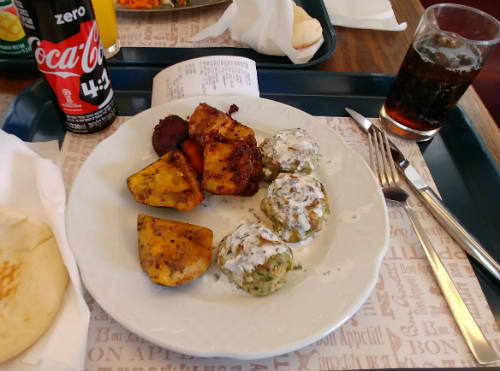 I opted for the falafel, hoping it would be as good as what I had eaten at the Druze restaurant on Mt. Carmel several days earlier. 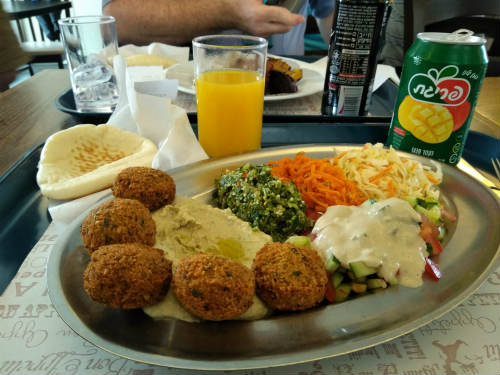 My daughter’s 15-year-old friend joined us and ordered a pizza even though she had to wait while they prepared it. What would Israeli pizza be like? Since pork products like pepperoni are not kosher, she had a cheese pizza. 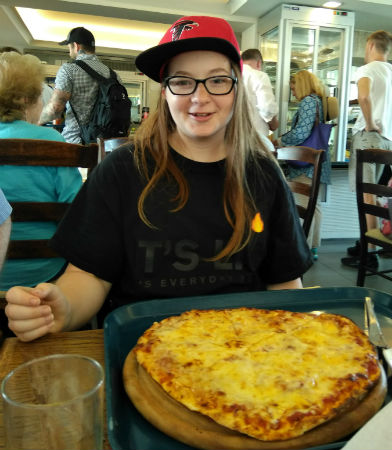 The supposedly personal-size pizza was huge. There was no way she could finish it by herself. My husband was more than willing to help her out. Though the falafel had filled me up, I sampled the pizza too.

It was nothing like the cheese pizza I typically turn my nose up at in the US. The cheese tasted different, and the spices in the sauce were delicious. The combination was amazing.

Refreshed from our lunch, we gathered in the plaza. While waiting for everyone to arrive, we made friends with the local cats. 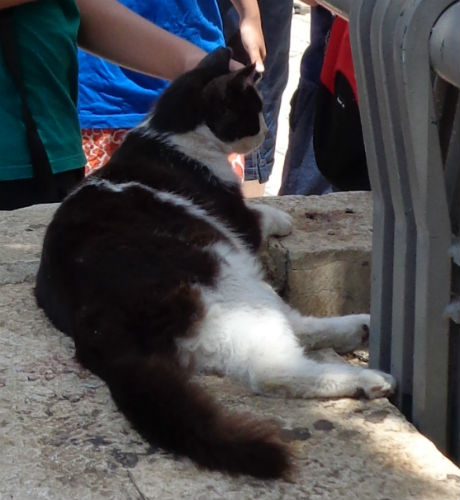 When our group was together again, Mika told us about the Hurvah Synagogue which stood across the plaza from us. It was destroyed seventy years ago and was not rebuilt until 2010. 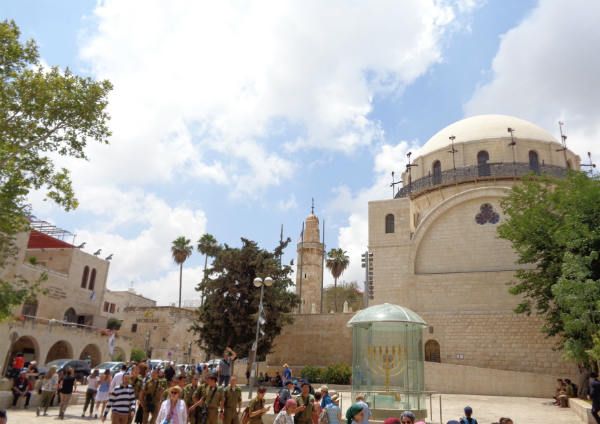 In front of the synagogue, a large menorah made of solid gold was impossible to miss. The Temple Institute built it according to the specifications given in the Torah. It is intended for use in the next Jewish Temple when it has been built. 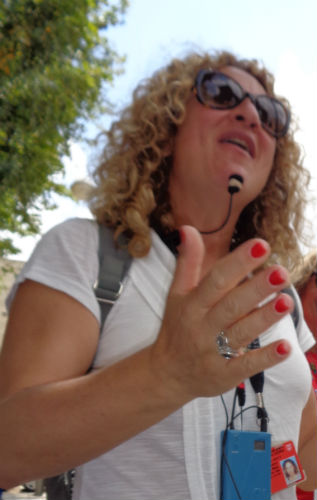 We were puzzled when a random guy approached our group as Mika was talking. He walked toward our tall, muscular friend who sports a ZZ Top beard.

He put his arm around Abe and posed for a picture. As he walked away, we looked at each other in wonder. What was that all about?

Even our tour guide was surprised by this unexpected turn of events. Recovering quickly, she concluded her explanation. Then it was time to retrace our steps past the Cardo and into another section of the city. There, we would visit the traditional location of the Upper Room. 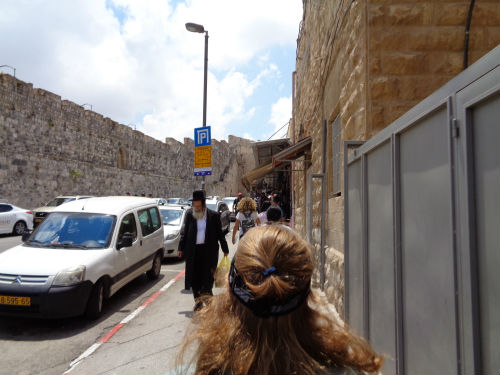 My husband and I enjoyed fish cakes and falafel while our young friend ordered a pizza in downtown Jerusalem. What food would you be curious to sample in Israel? Feel free to comment below or on Facebook.