After achieving success on the trails at Zhishan Park, we felt prepared to venture further from our Airbnb (affiliate link) the next morning. We had heard that the top of Elephant Mountain was the best place to view Taipei 101, which is the tallest building in Taiwan and the fifth tallest in the world. Like most trails in Taiwan, though, the climb up Elephant Mountain was reported to be composed entirely of stairs. Although one girl, who was still acclimating, was reluctant to give it a shot, we all rose to the challenge anyway. 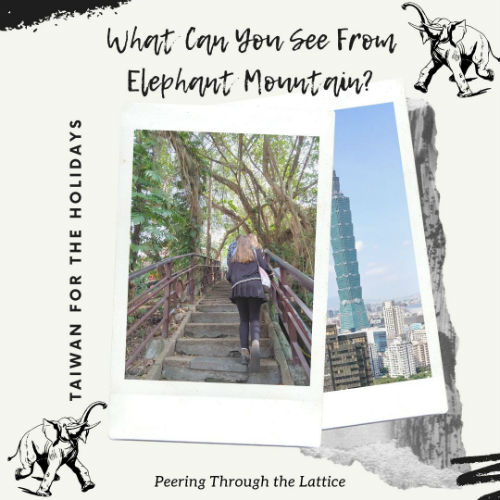 The route to the MRT station was becoming more familiar to us every day. We left our apartment and made our way to Zhishan station.

From there, we rode the subway’s red line to Xiangshan (象山), its southern terminus. The station’s name is the same as the mountain we were setting out to climb—it directly translates to Elephant Mountain.

After exiting the train, we followed signs to the trail entrance, stopping along the way to grab some liquid refreshment to help us stay hydrated during our hike.

At the trailhead, we gathered for a group photo. 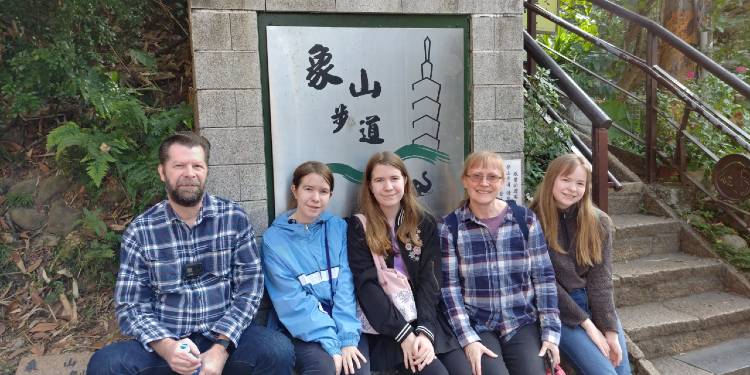 Then we turned and saw the endless stairs ascending to the top. Could we make it? Sensing our uncertainty, tourists returning from the summit encouraged us that we could do it. 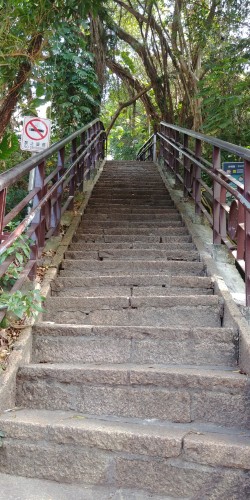 How do you climb a mountain? One step at a time. We each put one foot in front of the other and began the arduous ascent. While my husband took the lead, I brought up the rear, determined not to lose any of our daughters on this challenging hike. 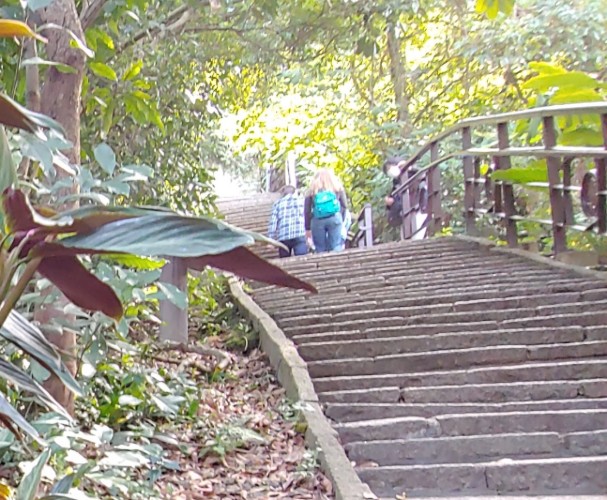 Benches in the shape of elephants appeared on the left of the trail. The seats on the opposite side bore the Chinese characters for the mountain, Xiangshan (象山). 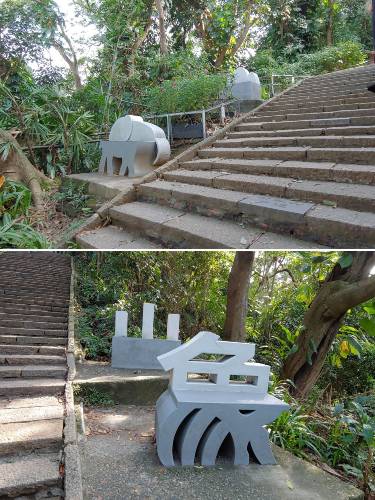 Halfway up the mountain, the stairs ended, and a walking trail continued to our left. Following it, we came to a platform that provided a beautiful view of the Taipei 101 tower and much of the city. 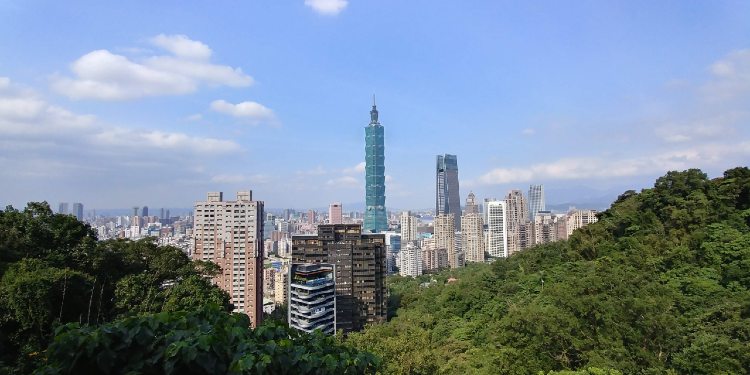 Opposite the platform, stairs ascended higher up the mountain. Since one twin refused to climb any further, I waited with her and enjoyed the view from there. 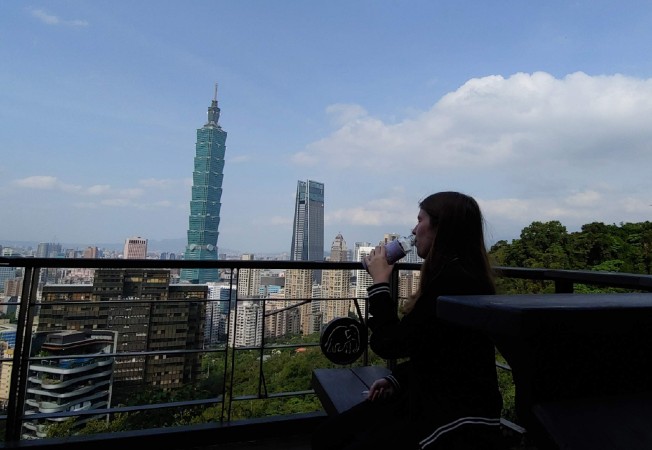 Meanwhile, Dad continued to the top with the other two girls.

Atop Elephant Mountain, they had a fantastic view of the city. 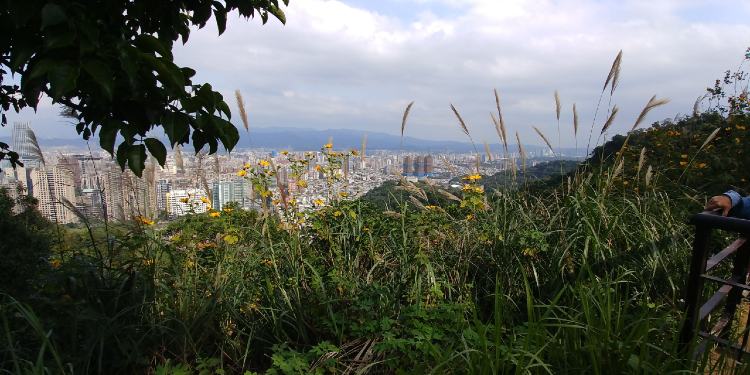 A huge boulder jutted up from the trail, beckoning my daughter to climb up even further. Was she taller than Taipei 101? 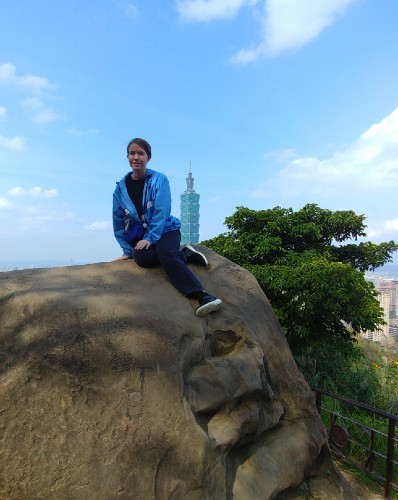 After their aerial adventure, Dad and the girls rejoined us at the lower platform. Rather than retracing the trail to the bottom, we ventured further along the flat path. Eventually, it led to a viewing platform that would be perfect for watching fireworks at New Year’s.

From there, we spied another set of steps heading down to the street. We turned and began our descent. The stairs on this trail snaked down the side of the mountain. 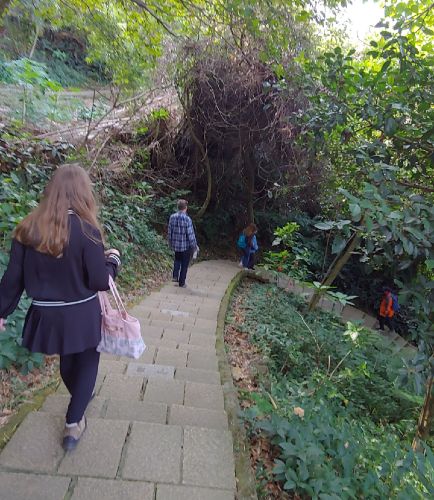 About halfway to the bottom, my older daughter spotted a grassy area and paused to take portraits of her younger sister. 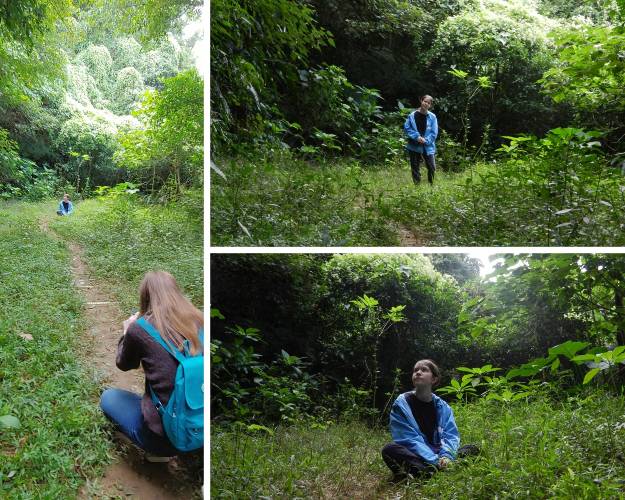 After returning to the trail, we quickly reached the bottom of Xiangshan and headed back toward the MRT station. Our final view of Taipei 101 that morning was from ground level. 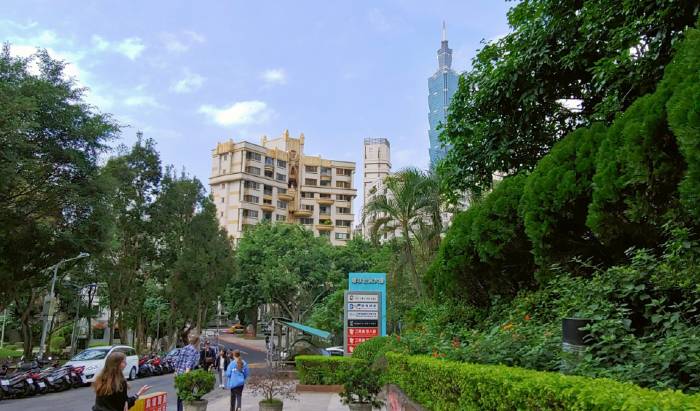 Worn out from our successful venture, we rode the subway back home. On a later excursion, we planned to visit the tower and ride the elevator to the top. If we timed it just right, perhaps we could get daytime and nighttime views from the observation deck during the same visit.

We were in Taiwan from the end of November to the middle of January. Watch for more blog posts about our trip in the coming weeks, and explore our Instagram hashtag #Taiwan4theHolidays to view more pictures of our Taiwan adventures.