Last summer, while my mother-in-law was visiting, we bought a container of bean sprouts to add to her amazing salads. Though several of us consumed them, we barely made a dent. A week or two after she left, I discovered the forgotten “science project” hiding in the fridge. Ew! Immediately, I tossed the whole slimy mess.

Recently, I took a gut biome test and discovered that those sprouts are a “superfood” for me. Though my taste buds have never been a big fan (except in pad thai), my body feels better when I eat them. Afraid to invest in a large container that would sit forgotten in the fridge, I scoured the internet for alternatives. How hard could it be to sprout a few bean seeds myself? 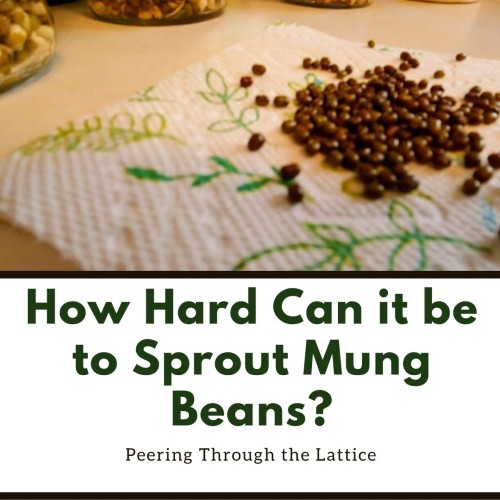 The process I discovered was simple. No soil and no planting is necessary since the beans have all the nutrients they need to produce healthy young sprouts. After soaking the beans for six to eight hours, strain them. Then allow the damp seeds to sit in a loosely covered jar. Rinse and drain them two to three times a day. Within about three days, there should be edible sprouts. It sounded so easy that even I could do it.

Uncertain of exactly how many beans to sprout at a time, I coated the bottom of a clean pickle jar with a layer of mung beans one morning and filled it with water.

Before dinner, I rinsed the beans several times, covered the jar with a damp paper towel, and set it in a dark corner.

After faithfully rinsing and draining the beans three times a day, I found small sprouts growing by day three. 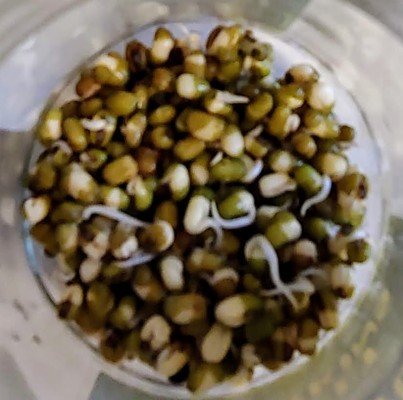 They were the perfect size to start munching. I stuffed a few into some black olives to enjoy at lunchtime.

By the fifth day, the seeds were shedding their green covering, and the sprouts were growing longer. 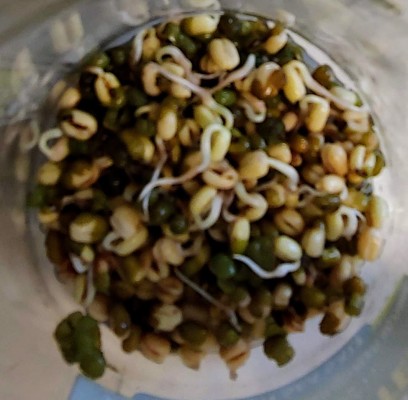 I continued enjoying them along with my meals. For one lunch, I added them to my avocado toast and topped it with fresh lettuce from our Aerogarden and a slice of roast beef. On the next day, I added them to chicken and rice. They contributed a healthy, delicious crunch. 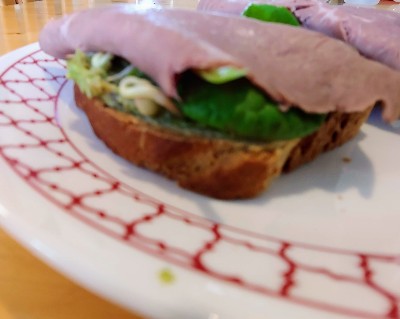 I wasn’t the only one eating them. At dinner one evening, the jar found its way to the table, where my twin daughters enjoyed them. They were eating the sprouts by the handful. Thankfully, I had already decided to start growing a new jar of sprouts every other day. 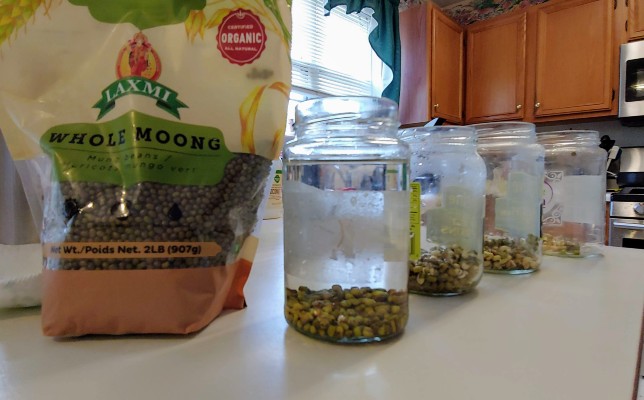 By the seventh day, several of the seeds in the first batch were beginning to produce small leaves. 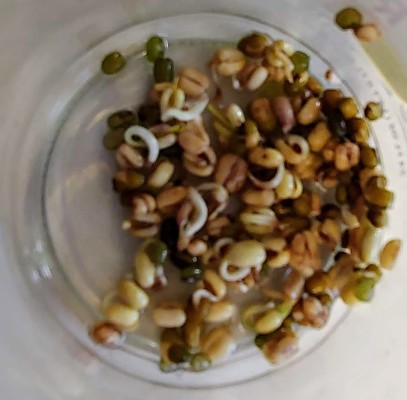 Time to gobble them up! One of the girls polished off the remains of the first jar on her slice of peanut butter bread. 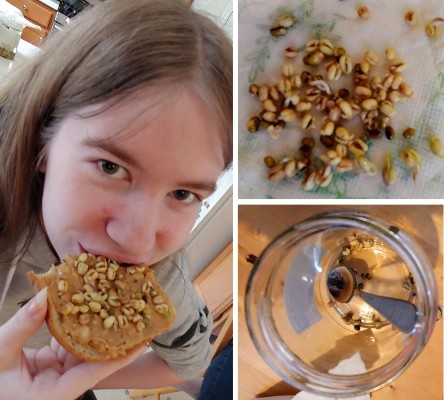 Sprouting mung beans is even simpler than I expected. My only investment was the beans. Although I could have purchased tools to simplify the process, I did not need them. Instead of buying a straining lid to fit the jars, I could use a strainer I already owned. Ultimately, I discovered that covering the top of the jar loosely with my hand to drain the water works just as well.

Surprisingly, sprouts can be a delicious addition to a variety of foods—not just salads. Although I was not a fan of the flavor at first, I love the delightful crunch they add. What is your favorite way to enjoy mung bean sprouts?