While publishing progress reports for my rising high school senior, I noticed my mistake. I had forgotten to share the final segment of the twins’ eighth-grade progress report. I’m not sure how this post slipped through the cracks, but I certainly want to share how my youngest students earned their first high school English credit this year. 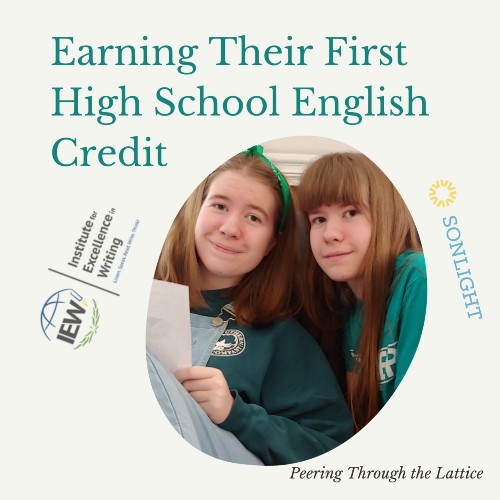 In addition to orally evaluating the literature included in our Sonlight World History curriculum, the twins built their English skills with resources from the Institute for Excellence in Writing (IEW). For grammar, they used two books from the Fix It! Grammar series. To improve their writing skills, my daughters completed a Student Writing Intensive Course.

Last spring, the twins completed the first half of Fix It! Grammar 2: Robin Hood. After pausing for summer break, they were eager to continue. As they approached the end of the book, I asked if they wanted me to purchase the next level. Their answer? A definitive yes!

Beginning in January, my fourteen-year-old daughters began Fix It! 3: Frog Prince, or Just Deserts. Most weeks, a new skill was introduced. After marking up and editing a short passage each day, the twins checked their work using the Teacher’s Manual. Then each girl carefully copied the lines into a spiral notebook. The copywork provided an excellent opportunity for them to show off their penmanship. 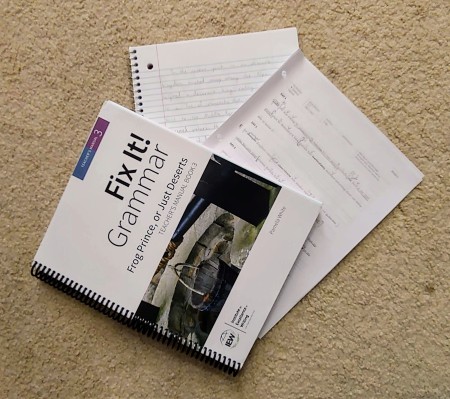 Fix It! Grammar is applied grammar my daughters are eager to complete. To practice each week’s new skill, they correct and improve a sentence or two just like they would if they were editing their own writing. Since each curriculum level tells a complete story, the girls are pretty motivated to do each day’s short lesson.

Even so, making steady progress was sometimes a challenge. In April, I discovered that one of the girls had “forgotten” to do her lessons and had fallen behind. When she realized the assignments had to be done, she picked up the pace to complete them before summer. Since each day’s work typically required about 15 minutes, it was quite doable. 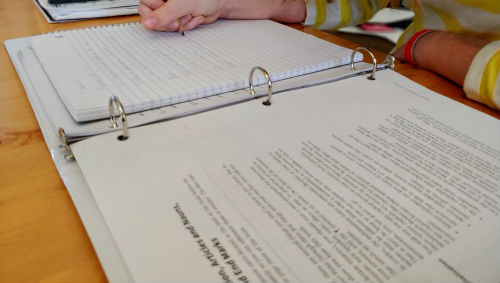 Now that the girls have completed half of book 3, it’s nice to take a well-earned break. But they’ll be eager to finish the second half in the fall.

At the beginning of 2019, I began to understand the philosophy behind the Institute for Excellence in Writing. After attempting to teach the girls using IEW’s methods on my own for a few months, I realized they would benefit from using a complete writing curriculum. For the 2019-2020 school year, I purchased the IEW Student Writing Intensive Level C. I received a set of Instructional DVDs, a binder of printed resources for each lesson, and a link to download and print extra copies. 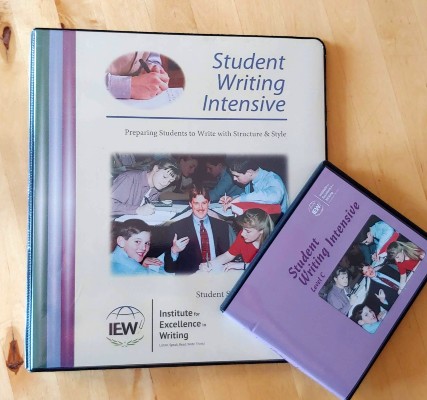 My older daughter joined the twins for these lessons. Once every two weeks, the three girls and I gathered around the TV to watch Andrew Pudewa present new material. Between video lessons, the girls completed one or two writing assignments.

Initially, they practiced making keyword outlines from a source. Later, they used their notes to rewrite or summarize the information. They even rewrote stories and discovered how they could use an existing narrative as a model for creative writing. As the year drew to a close, they practiced brainstorming ideas and writing essays. 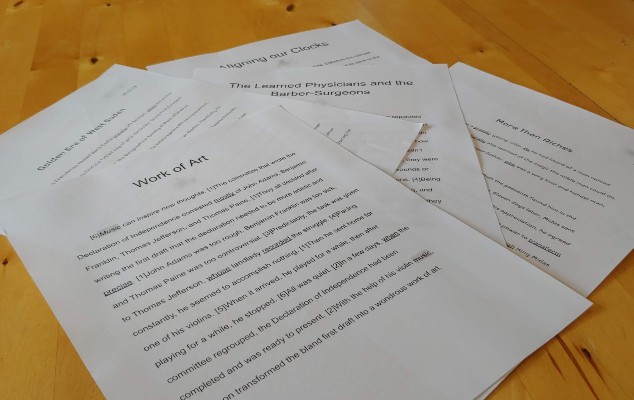 In addition to completing various assignments, the girls improved their writing style. A paragraph full of similarly-structured sentences can be monotonous to read. Following a checklist, they practiced adding stronger verbs, quality adjectives, and complex sentences to their writing. 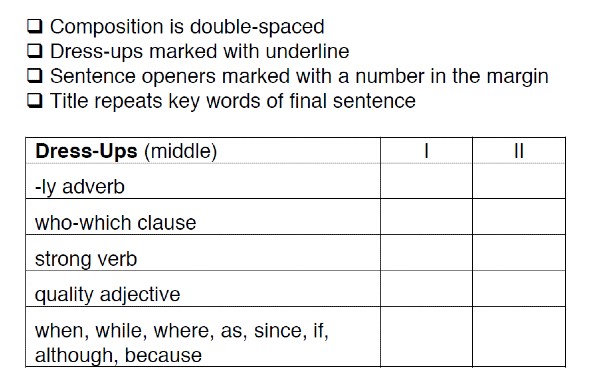 As they progressed through the program, the checklist grew. By the end of the year, the girls practiced starting sentences in a variety of ways—with a dependent clause, an -ly adverb, or a prepositional phrase. The final item on their checklist encouraged them to add something special to decorate each paragraph—like alliteration, a metaphor, or a question. 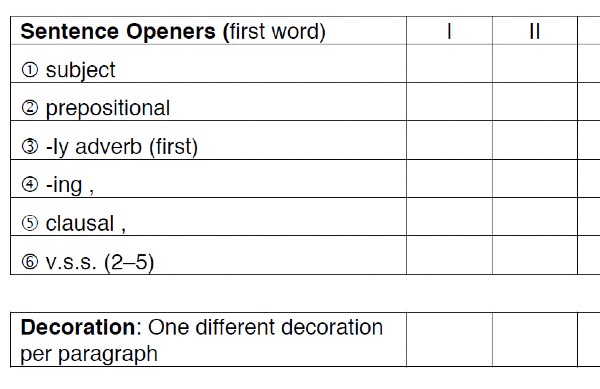 All three girls improved their writing skills tremendously, but not all of them enjoyed the process. Although the twins loved watching Andrew Pudewa’s lively explanations, my high schooler tended to tune out. The twins’ enjoyment of the videos translated into enthusiasm for writing. Still, despite my high school daughter’s lack of interest, her work improved with every assignment.

The course progressed quickly. At times, the presentation of multiple skills overwhelmed all three girls. But they worked hard and became accustomed to completing at least one writing assignment each week. I was often inundated with papers I felt unmotivated to grade.

Now that the girls have completed the course, none of them will continue to the next one. We expect to head in a different direction in the fall. The twins will likely focus on writing poetry and short stories.

Having completed IEW’s high school level Student Intensive Level C, the twins can certainly receive high school credit. Based on the time the girls spent using the curriculum, I can give them half a credit for completing the course. Their work in Sonlight Literature and Fix It! Grammar provides the other half-credit. Each of them earned an A.

Even though they have only officially completed eighth grade, it’s exciting to see high school credits for Algebra and English on their transcript this year. The twins and I are excited to continue with Sonlight and Fix It! Grammar in the fall when they will begin earning their second high school English credit.