Can you believe our spring semester is already coming to a close? Time has flown by. While preparing to write the twins’ eighth-grade progress report, I took a final look at this year’s math and science resources. We spent the year building on the twins’ strengths, getting a taste of high school science, and pursuing their interests. 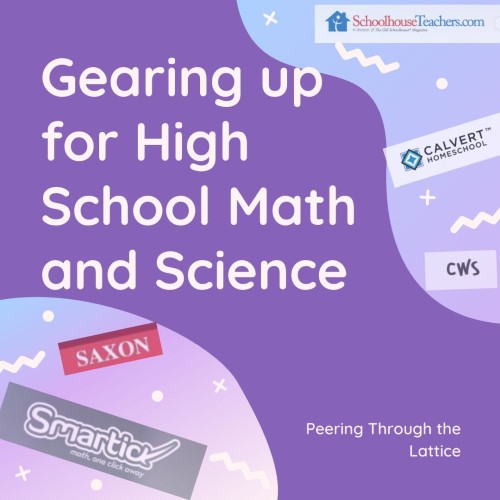 Math is one of the twins’ strongest subjects. Our school year began with a review crew opportunity to evaluate Smartick Math Enrichment. The online app helps students from elementary through middle school improve their math skills in just fifteen minutes a day. Even though the twins had already progressed beyond middle school math, Smartick was quite useful for reinforcing previous math concepts. 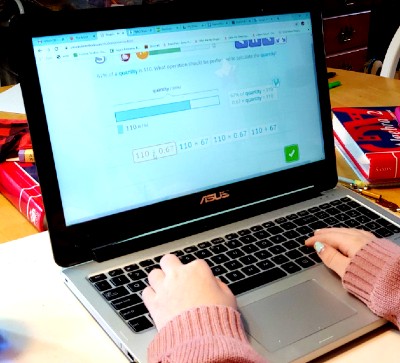 As we pressed on into Algebra 2, though, we set aside the helpful online practice to focus on new skills in our Saxon textbook. Using Smartick alongside a full math curriculum was overkill.

When the twins started Algebra 2, they completed an entire textbook lesson every day. Each girl read the explanation, used the practice problems to explain the new concepts to me, and then solved 30 review problems.

Early on, I realized that one of my daughters worked better on a whiteboard than on paper. 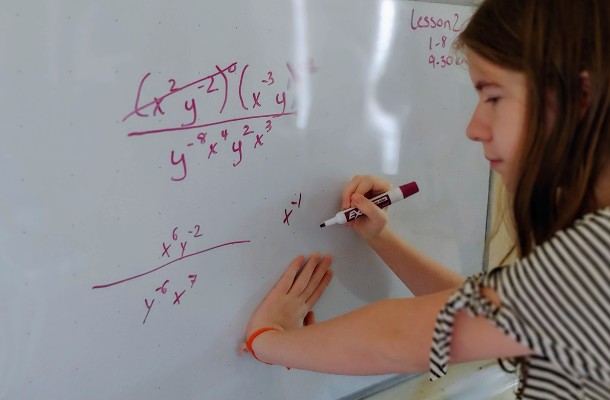 When the length of the lessons became frustrating, I contemplated our options. Realizing we didn’t need to rush through the book, I recommended a change of pace.

After experimenting with various strategies, the girls settled into a routine of completing a math lesson over two days. On the first, they would do the practice problems and the first ten review problems. They would finish the remaining twenty problems the next morning. This solution decreased their daily math time to an hour or less and provided sufficient review of earlier lessons. At this relaxed pace, the girls completed nearly two-thirds of the textbook. 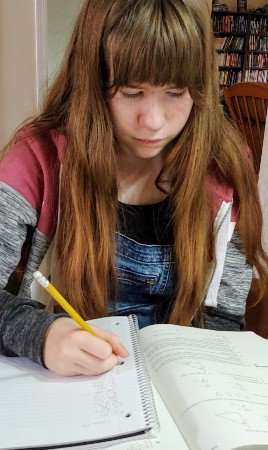 Both twins scored well on their math assignments. Whenever they missed a problem, I encouraged them to try again to receive partial credit. Answering correctly on their second attempt, they could receive half credit. On the third try, they might earn a third of a point. Sometimes, they would keep trying up to five times and could recover a fifth of a point! Although their daily scores ranged from the 80s to the 90s, the twins averaged about 94% for the year, each passing with an A.

They look forward to completing the Algebra 2 book in the fall. By the end of 2020, they should have two full high school algebra credits. Since the Saxon algebra books include geometry, they’ll be well on their way to a geometry credit as well.

We started the year with Crosswired Science—a creation-based online curriculum that helps students of all ages understand deep science. Attempting to follow the suggested schedule on the website, the girls experienced information overload. Before long, they were begging to use something else. 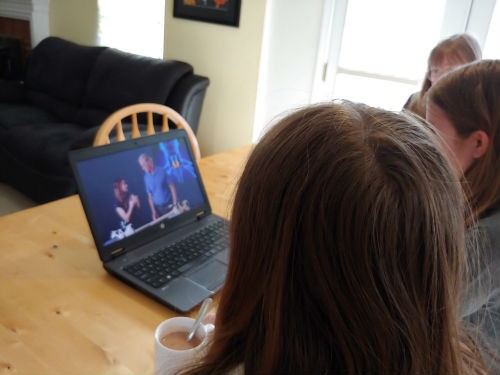 When we had the opportunity to evaluate Calvert Homeschool Online for the Review Crew, I signed us up. The twins worked on the high school Physical Science course. After completing the first two units, it was clear that Calvert’s online learning format did not suit them. 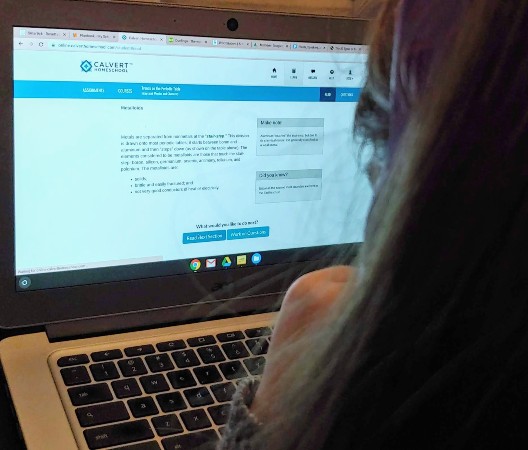 In January, the girls began brainstorming with Dad about planting a garden. Eagerly, I sought out a botany curriculum (affiliate link) that included some gardening projects. I found it on SchoolhouseTeachers.com (affiliate link). The twins loved the short but informative lessons and weekly hands-on activities. 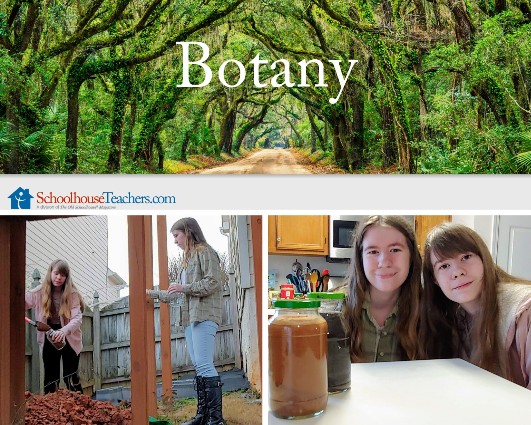 Before long, our house held a variety of science experiments. The girls examined the contents of soil, planted lettuce in our Aerogarden, and grew beans in three different soil types. 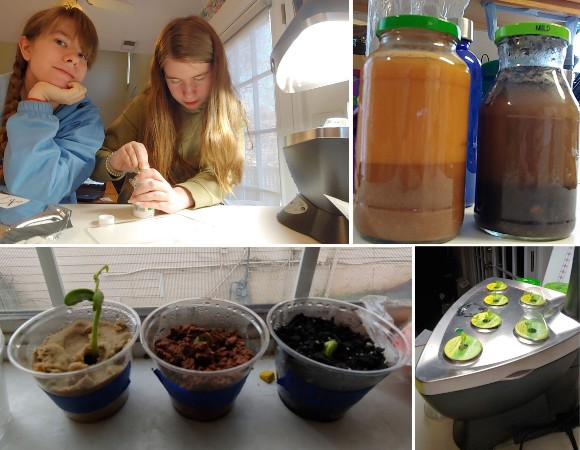 They even dissected an aloe leaf and extracted the gel! 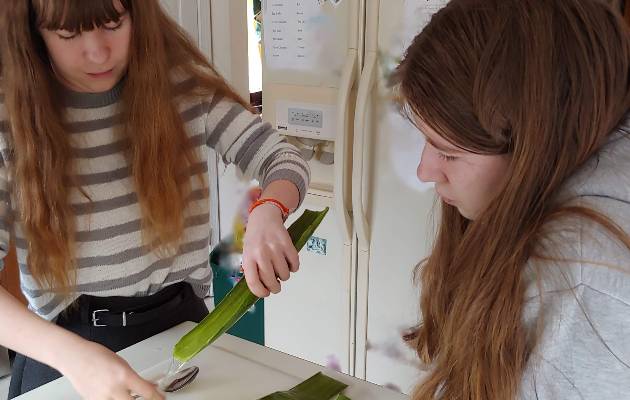 Unfortunately, preparing so many experiments became overwhelming for me, and the course fell by the wayside. The girls completed half of it.

The botany curriculum was an excellent introduction to high school science. In addition to reading lessons and completing experiments, the girls conducted online research and wrote about what they learned.

Though this year’s science was not enough for high school credit, it was perfect for eighth grade. Both twins earned A’s for their hard work.

As I begin contemplating resources for next year, my older daughter has suggested that the twins use Apologia’s Health and Nutrition curriculum. The half-credit course could count for either science or health credit.

Although we did not complete as much science this year as I had anticipated, I am thrilled at the twins’ progress. Their high-level math skills will empower them for success in high school science classes like Chemistry and Physics. Since they were able to sample various science curricula, I know what to look for in future courses. I expect them to succeed well using a textbook curriculum that includes experiments.

Though I struggle with coordinating hands-on science activities, the twins enjoy them tremendously. It may be wise to invest in a high school lab set to accompany whatever curriculum we choose. Instead of micro-managing their science experiments, I need to allow the girls to take ownership of their lab materials.

I’m so glad that we decided to take an extra year of middle school to ensure the girls were ready for more challenging courses. Having completed eighth grade, they are prepared to progress even further in high school math and science.