We topped off our trip to Israel with a visit to the Dead Sea. On our journey so far, we had already encountered three significant bodies of water. We had waded in the Mediterranean Sea the evening we arrived. A couple of days later, we dipped our digits in the Sea of Galilee. While a number from our group were baptized, we stood in the Jordan River. Finally, it was time to experience the Dead Sea, where even the world’s worst swimmer could easily remain afloat. 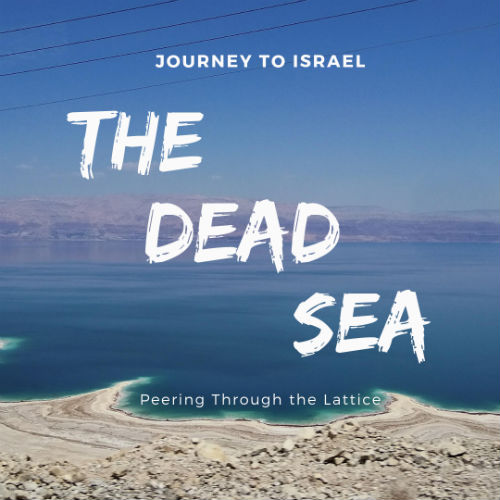 From Masada, we meandered north, retracing the morning’s route. During the hour-long journey to the northern end of the sea, we took in stunning views of the mineral-rich water. 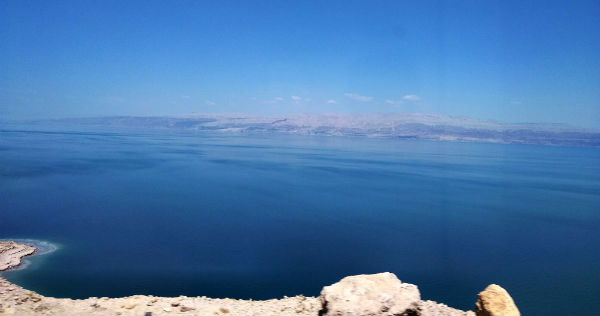 At last, we pulled off the road and drove toward a nearby beach.

Descent to the Dead Sea

Just past the parking lot, a small gift shop marked the entrance to the Dead Sea area. As we exited the boutique’s backdoor, a festive, party atmosphere greeted us. Outdoor bars and beach volleyball courts lined the path to the changing rooms. Entering a modern bathhouse, we slipped into swimsuits and slathered on sunscreen.

Next, we descended several flights of stairs to the lowest place on Earth. I was thankful for the Crocs I wore since the scorching sand would certainly have burned bare feet.

Canvas canopies along the beach sheltered plastic chairs. We piled our backpacks on several seats then approached the water. After walking knee-deep into the Dead Sea, we bent our knees and leaned backward, practically sitting into the water. The water buoyed us better than a raft.

The super-saturated warm water felt oily. Was that because of the many minerals in the water? Or did it merely come from oils and sunscreen shed from so many people in close proximity? Perhaps both factors contributed.

Can you swim in the Dead Sea? I can’t imagine trying to. The salinity of the water causes any slight faceward splash to irritate your eyes. I ought to know. After a stray drop of super-salty water shot into one eye, tears suddenly streamed down my cheek. Anxious to relieve the burning sensation, I rushed to rinse at the seaside shower. 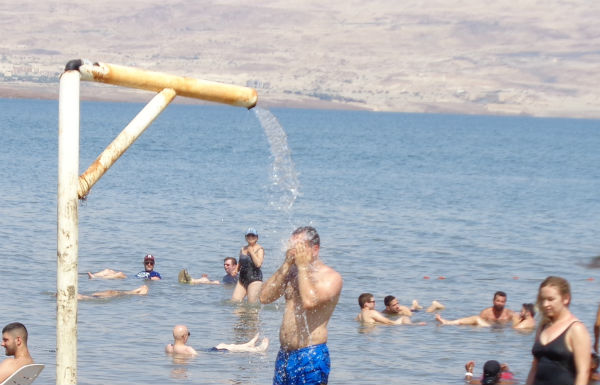 Others who were in line to rinse had coated their skin with the mineral-rich mud along the edge of the sea. Once the full-body beauty treatment had dried, they scrubbed it off in the showers. 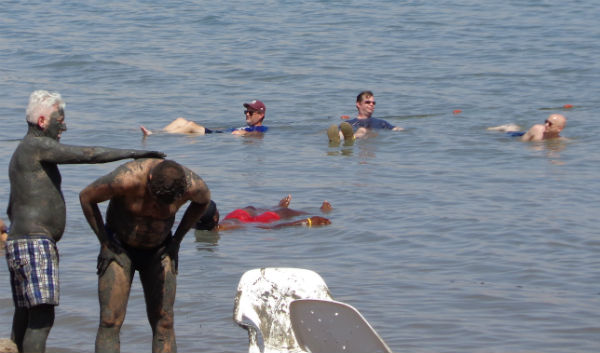 Hesitant to risk another drop of water in my super-sensitive eyes, I took shelter under the canopy and observed for a while, thankful for the shade. As always, I wanted to avoid a sunburn on my fair skin.

Eventually, I returned to the water. Although many were floating alongside me, it was peaceful and relaxing.

Soon it was time leave. We worked up a sweat climbing the stairs to the bathhouse, where we could wash and change. Wishing I had brought along toiletries, I showered off seawater and sweat. In dry clothes, we followed the path back to the bus.

Although the atmosphere above the Dead Sea was not as peaceful as I would have preferred, our trip to Israel would not have been complete without floating in the salty water. On our next visit, perhaps we could stay in a hotel right by the Dead Sea. I imagine a hotel’s beach area would seem less crowded than the day-use area we visited.

Before returning to our hotel, we stopped by a convenience store where we sampled dates, shopped the snack selection, and secured a single souvenir—a stuffed camel for my niece. 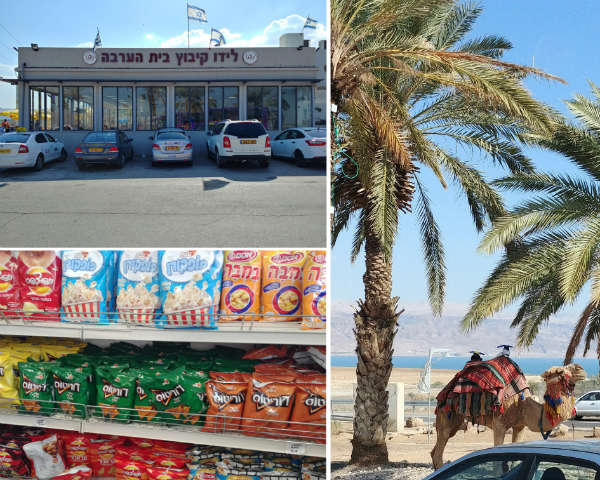 On the return journey to Jerusalem, we observed a settlement of tents near the road. At first, we assumed the residents were living in dire poverty. They were, in fact, nomads who lived that way intentionally. 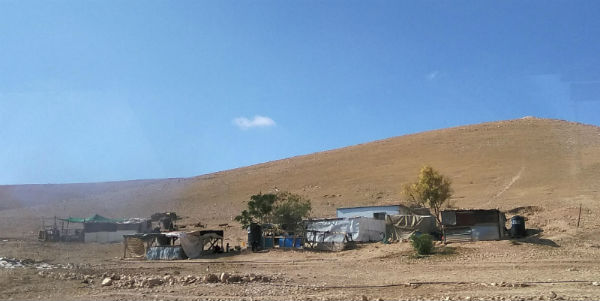 As we drew closer to Jerusalem, expensive Palestinian apartment complexes rose in sharp contrast with those tents.

It was already evening when we arrived at our hotel. After showering with soap and shampoo, we gathered aboard the bus. Singing as we went, we celebrated our group’s final night together with dinner at a local restaurant. 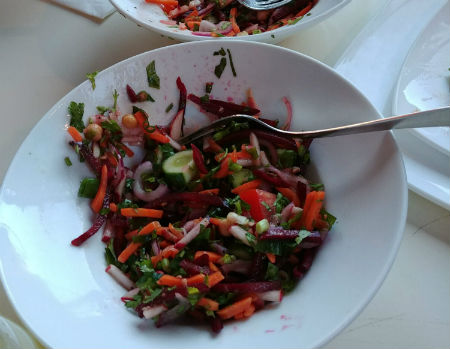 The next morning, we all headed our separate ways. Several were continuing their tour in Rome. One family stayed in Israel to visit family for a few more days. Like most of the people in our group, we flew home. 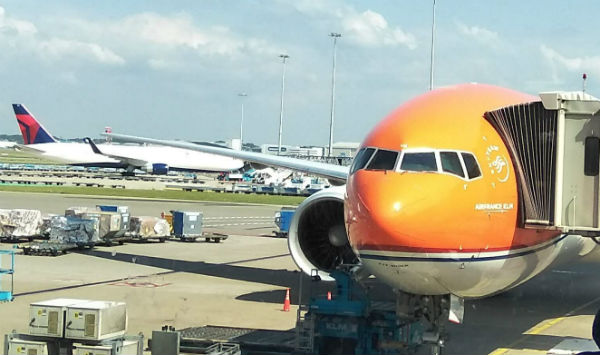 Although we would have loved to spend more time in Israel, we were anxious to get home. Our four teenagers had been on their own while we traveled. Our oldest daughter had been in Taiwan for three months; she flew home the same evening we did. We couldn’t wait to have the entire family together again. But I will always treasure the time we spent in Israel.

Do you have any questions about what our trip to Israel was like? I’d love to answer them! Please share them in the comments below or on one of my social media feeds.